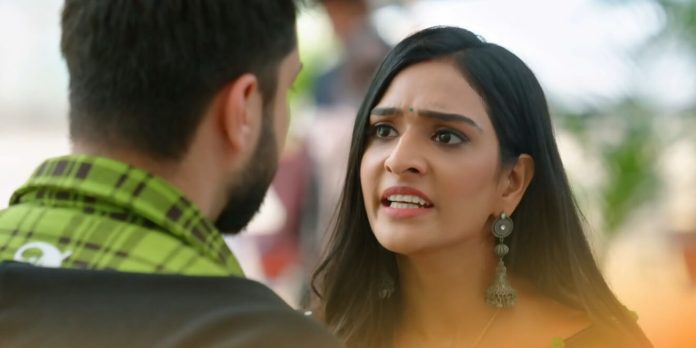 Bhagya Lakshmi 27th June 2022 Written Update Lakshmi’s love Rishi takes Lakshmi to see a doctor before they head to the court. Lakshmi’s poor health worries Rishi. Doctor examines Lakshmi. She tells Rishi that it was just a minor acidity attack due to stress, she will be fine if she takes good rest. Rishi wants to know what is Lakshmi hiding. He confronts her for the truth. Lakshmi tells him that she has accepted him as her husband for all the coming births. She gets angry on Rishi. He angrily walks on the road. Lakshmi sees a speeding car towards Rishi, and madly runs to save his life. She senses the Markesh attacking him.

Ahana tells Neelam that she has a big issue, she doesn’t know how to tell her the truth. Later, Ahana gets ready for her engagement, wearing Lakshmi’s saree. Gautam is worried for Ahana, and moreover for Lakshmi, who is facing a big problem because of hiding Ahana’s secret. He thinks to reveal the secret to his family soon. Malishka criticizes her at the sight. She insults Lakshmi. She tells that Lakshmi is a fake girl, she pretends good all the time. Ahana asks her to stop it. She adds that she will not hear a word against Lakshmi. She questions Malishka who is she to comment on Lakshmi.

Earlier in the show, Gautam meets the family. Ahana tells that Gautam came home to drop her. Ahana asks Gautam if he spoke to his parents. Gautam tells that he couldn’t talk to them. Sonia tells that she will tell them, its her right to tease them. She asks them to have lemonade. She excuses them. She tells Karishma that Ahana is stressed. Neelam worriedly goes to talk to Ahana. Ahana asks Gautam to fix things. Gautam tells that he doesn’t know how his parents will react. Ahana tells that she wants to say the truth and make a new start, she doesn’t want to start relations on the basis of lies.

Ahana tells Gautam that she doesn’t want to start the relation on lies. She is much tensed. Gautam sees Neelam coming. He tells her that she is really looking pretty, even his parents like her a lot. Neelam asks Ahana what’s the problem. Gautam tells that Ahana is tensed about her facial, women never get satisfied when its about makeup. Neelam tells Ahana that she is really looking good. Gautam takes a leave. Ahana stays disturbed. Lakshmi gets her checkup done. Rishi asks her is she okay. She asks the doctor is everything normal. He appears really caring towards his wife.

Doctor asks him to relax, its an acidity attack due to stress, maybe Lakshmi is mentally stressed about some matter. She asks Rishi to give the medicines to Lakshmi. Rishi scolds Lakshmi for troubling him. He tells that he worries for her, he thought she is in pain. Doctor likes their cute arguments. She calls them a perfect husband and wife pair. Rishi and Lakshmi see each other with love. Doctor asks Lakshmi to take the medicines and get well soon. Lakshmi sees Rishi carrying so much for her. She feels happy. Ahana looks for Lakshmi at home. She doesn’t find Lakshmi. She has to tell Lakshmi that Gautam didn’t talk to his parents till now, and the engagement is just about to happen in few hours.

She wants some advice from Lakshmi. Neelam asks Ahana what is wrong, she shouldn’t take Lakshmi’s name, Lakshmi is unlucky for them. She asks Ahana is she happy with Gautam. She knows Gautam was lying, the matter is something big. Ahana tells that the matter is really serious. Neelam asks her to tell her what is bothering her. Ahana tells that she asked Gautam to do some work before the engagement, but he didn’t do it. Neelam asks her what did she ask Gautam. Ahana lies to her. She tells that she wanted to twin their engagement clothes, but Gautam chose a different colour and made her upset. Neelam asks her not to worry. Ahana asks about Lakshmi again. Neelam angrily shouts on her, and asks her not to name Lakshmi again.

Ahana wishes to tell Neelam that Lakshmi has saved their family respect by covering the pregnancy truth. Neelam wishes that Lakshmi leaves their house as soon as possible. She advises Ahana to think of herself, not Lakshmi. She asks Ahana to get ready for the engagement. Ahana tries calling Lakshmi. Karishma asks Ahana to leave the phone and come to select the jewellery, its her engagement day after all. Dadi entertains everyone by her dance practice. Ayush asks Dadi to have the medicines. Dadi slaps him. They have a funny scene.

Ayush tells that he will also dance with her, but on a different song. Ayush dances with Dadi. He compliments Dadi for having solid stamina in this age. He asks where is Rishi, he is missing all the fun, even he should practice dance. Malishka asks him to forget Rishi, Rishi is away and also Lakshmi. She feels they are able to enjoy because Lakshmi is away, she was doing a drama and got Rishi’s care again. She tells that Rishi is a good person, who always falls in a trap. Neelam tells that it’s a matter of few days now. Ayush feels hurt. He believed Lakshmi, who was his best friend before. He calls her a liar, and also a characterless person. Karishma asks them to forget about Lakshmi, and just have fun in the engagement. Neelam agrees. Dadi vents anger over the happenings.

Dadi likes Lakshmi. She gets upset hearing the family members speaking against Lakshmi. She tells that she will go and practice her solo dance performance. Rishi and Lakshmi reach the court. Lakshmi’s phone drops. She sees the phone screen broken. Rishi and Lakshmi’s marriage picture is on the screen. The picture reminds her of the marriage. Rishi finds her freezed and goes to see what happened. Rishi asks her what is she seeing. He picks the phone and gives it to her. He tells her that the phone can get repaired, but their relation can’t get fixed, she has created the rift in the relation. He tells that he doesn’t care for her. She asks him if he doesn’t worry for her, if she means nothing to him.

Neelam calls Gautam’s mom and asks her to come soon. Gautam’s parents are ready to meet Ahana. Gautam’s mom tells that Gautam isn’t ready till now. Neelam asks them to come soon. Gautam isn’t ready yet. He meets his parents with a tensed face. They realize something is wrong and ask him the matter. Gautam scares them by his silence. He then tells that he has to tell them something. The aarti plate falls down. His mom calls it a bad omen. Gautam gets worried for Lakshmi. Rishi tells that Lakshmi doesn’t matter to him. She asks him to look into her eyes and say that he doesn’t worry for her. He repeats his words. She doesn’t want to believe him. He meets her eyes and repeats it one more time. She wants him to not lie and just say the truth.

Reviewed Rating for Bhagya Lakshmi 27th June 2022 Written Update Lakshmi’s love: 4/5 This rating is solely based on the opinion of the writer. You may post your own take on the show in the comment section below.