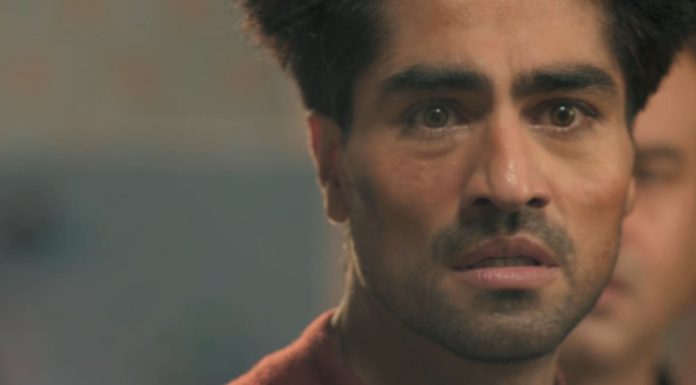 She gets angry and makes the female patient run away by telling her that Abhimanyu is her husband. She cutely wards off the bad sight from Abhimanyu. Dr. Rohan comes and tells Akshara that a patient of hers has come. He also tells Akshara that this patient seems mental. Akshara laughs and tells Rohan that they shouldn’t talk about anyone like this. Rohan asks Akshara to come and see what has to be done about this patient. He asks Akshara to not take Abhimanyu’s tension as he will inform him, once he wakes up. Akshara gets stunned hearing Rohan addressing Abhimanyu as “Gabbar Singh”.

She takes her bag and walks towards her cabin to take a look at her patient. Abhimanyu wakes up suddenly and thinks to get ready before Akshara comes to meet him. Akshara meets her patient Sanjay. Sanjay gives Akshara his old treatment file. He looks at Akshara weirdly. Akshara asks Sanjay, what is bothering him. Sanjay tells Akshara that he has been alone since she left him. He says someone should be there with him. Akshara asks Sanjay, who recommended him music therapy as nothing like this is mentioned in his treatment file. Sanjay tells Akshara that one of his friends showed him her photograph on Birla hospital’s site. In a weird way, Sanjay tells Akshara that she is beautiful and perfect for him.

Akshara senses something wrong and dangerous in Sanjay. She angrily requests Sanjay to leave as he doesn’t need her, but a psychiatrist. Sanjay grows adamant and repeatedly tells Akshara that he needs her only. Akshara tells Sanjay that she can’t help him in any way and again angrily requests him to leave. Sanjay walks closer to Akshara and starts harassing her. Akshara gets angry and calls Sanjay insolent. She asks Sanjay to leave her hand. Abhimanyu comes and separates Sanjay from Akshara. He pushes away Sanjay hard. Sanjay falls down on the floor with a thud. On Abhimanyu’s instructions, Akshara calls security to the music room.

Abhimanyu starts slapping Sanjay hard. While continuously slapping Sanjay, he asks him, how dare he touch his wife inappropriately. Security comes to the music room. Abhimanyu hands over Sanjay to the security guards and asks them to hand over Sanjay to the police. He instructs the guards that Sanjay shouldn’t be seen in Birla hospital again. Seeing Sanjay staring at Akshara again, Abhimanyu threatens to beat him badly, if he repeats his mistake. Security takes Sanjay away.

Later, Sanjay cleverly enters the Birla hospital again covering his face with some accident and injured patients. Manjiri and Akshara talk to each other through texts. Akshara thanks Manjiri for encouraging her to attend the hospital event with Abhimanyu. Abhimanyu changes and gets ready to meet and reconcile with Akshara. He collides with Rohan on the way. He scares Rohan initially but later leaves after pulling his cheeks. Rohan understands that Abhimanyu and Akshara have started sorting out their issues. Akshara feels excited to reconcile with Abhimanyu. On the other hand, Sanjay takes out his cover and decides to teach a lesson to Abhimanyu and settle their scores.

He steals a knife and walks angrily in the hospital corridor. Akshara and Abhimanyu again meet and get lost in each other’s eyes. They also caress each other by coming closer in an empty place of the hospital. Abhimanyu senses Sanjay and saves himself and Akshara from his attack on time. Abhimanyu runs behind Sanjay and instructs Akshara to go to the lobby, instead of coming behind him. Akshara regrets coming to the corner and runs behind Abhimanyu in tension. Abhimanyu loses Sanjay’s track and searches for him in nearby rooms. Akshara also tries searching for Abhimanyu.

Abhimanyu finds Sanjay in a store room full of oxygen and other gas/chemical cylinders. Sanjay puts his hand on one of the gas/oxygen cylinder’s knobs. Seeing Sanjay smiling with a lighter, Abhimanyu requests him to stop as it can be dangerous. He asks Sanjay to talk to him outside as he has enmity just with him, not other people. Abhimanyu requests Sanjay to not put the hospital patients’ lives in danger. Abhimanyu promises Sanjay that no one will say anything to him, once he walks out of the hospital. He tells Sanjay that he can leave freely. Sanjay finally turns on the gas/oxygen cylinder and throws lighter in the air.

Both Abhimanyu and Sanjay run in opposite directions. A blast takes place, shocking everyone present at the hospital. Rohan comes and informs everyone that a blast took place in the north wing. Anand asks his staff to call the fire brigade. Neil goes to call the security. Rohan, Aarohi, Mahima and Anand run towards the north wing. The chemical and gas cylinders room is seen fully covered in fire. Abhimanyu gets worried about patients, staff and doctors of the north wing. He fails to see that Akshara is also present in the same room as him. Akshara gets worried for Abhimanyu. She prays to God for Abhimanyu and everyone’s safety.

Abhimanyu finds some patients, doctors and staff in danger and runs to help them. Neil, Rohan, Aarohi, Anand and Mahima reach the north wing. Neil calls someone to bring fire extinguishers quickly. Anand and Aarohi ask the staff to quickly switch off the mains electricity and gas supply of the north wing. Abhimanyu gives blankets to patients and staff in danger. He asks them to not panic and just walk with him. Akshara also helps some patients with blankets and escaping. She starts feeling ill. Both Abhimanyu and Akshara have a hit and miss even after coming closer to each other.

Abhimanyu escapes successfully but Akshara gets stuck. Both Mahima and
Anand gets tense about the hospital, its staff and patients’ lives. They also get worried knowing that the fire brigade hasn’t reached the hospital yet. On the other hand, Neil saves Aarohi from fire. Akshara is seen saving some other patients too. Anand asks Neil to ask the ward boys to prepare new beds in another wing as they will have to shift north wing’s patients in it.

In the next episode, Abhimanyu will return to the chemical and gas cylinders room to save stuck Akshara. Later, both Abhimanyu and Akshara will be seen lying unconscious inside the gas cylinders and chemical room.

Reviewed Rating for Yeh Rishta 2nd July 2022 Written Update Fire blast: 3/5 This rating is solely based on the opinion of the writer. You may post your own take on the show in the comment section below.