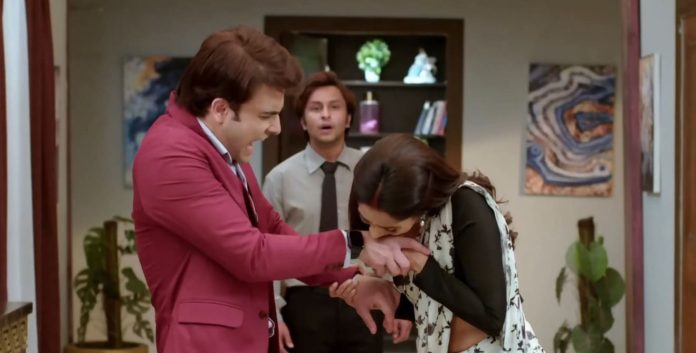 Kumkum Bhagya 5th July 2022 Written Update Weird Prachi Dida asks Prachi to make the arrangements for Pallavi’s birthday. She hopes that Prachi wins Pallavi’s heart and changes Pallavi’s decision of ousting her. She wants Prachi to stay happy. She doesn’t want Pallavi to oust Prachi or Prachi to leave the house on her own. Prachi promises Dida that she will have only two emotions from now, she will either laugh happily or vent out her anger, but she won’t cry and upset herself. Dida and Shahana have breakfast with Prachi. They find Prachi much motivated and get glad. Ranbir and Prachi collide. Ranbir falls backwards. Prachi holds his hand to save him.

He is aware that she is pregnant, but still didn’t discuss it with her. He jokes that the girls keep the Karwachauth fast to protect their husbands, but Prachi has protected him just like that. Prachi doesn’t like his flirting. She angrily bites his hand and teases him. Stanley and Shahana find their funny banner going on and seem to enjoy. Prachi gets busy in the arrangements. She instructs the staff about the decorations. Dida deliberately gets Pallavi there. She tells that Prachi is doing the decorations for Pallavi’s birthday, when she thought Rhea would be doing the arrangements. She asks Pallavi to open her eyes and see Prachi’s efforts.

Pallavi insists Ranbir to go to his room and be with Rhea. Vikram asks Pallavi not to scold Ranbir always. She tells that its important to scold Ranbir and show him the right path. Prachi tells Dida that she has memories with the house, the memories torture her, she wants to leave the house and go away. Dida tells that she loves Prachi more than Ranbir. She pampers Prachi. She tells that she loved Ranbir more than Vikram, she is upset with Ranbir after knowing his mistake. She apologizes to Prachi on his behalf. She wants to repent Ranbir’s actions. Prachi asks her not to blame herself.

Vikram wants his old staff back for the new project. He tells that he is super happy that his dream is getting fulfilled. Pallavi and Ranbir want to know why is Vikram so happy. Vikram shares the good news with them. He tells that he will be opening a small village in their city, he got all the permissions for the village project. Ranbir tells that it feels good to see the dream getting fulfilled. Vikram tells that he really likes it, he has called his old staff. Stanley comes to work with Ranbir. Ranbir asks Pallavi to send his breakfast to the study room. Pallavi tries stopping Ranbir. Dida asks Prachi if she liked the breakfast. Prachi tells that she is happy, and also liked the breakfast.

Stanley reminds him. He asks if everything is okay. Ranbir tells that everything got spoiled, he wanted to tell Prachi his feelings, Rhea fainted at the same instant, then he got to know that Rhea is pregnant, Prachi felt bad, she left the house when Pallavi insulted her, he found her at the old flat. He feels his love story is complicated. He wants to leave the house and start a new life with Prachi. He wishes to show faith to her. Stanley asks him to leave. He tells that he wants the family to kick him out of the house. He gets an idea to bring losses in Vikram’s project, and anger him to the level that Vikram ousts him. He wants just Prachi with her. He tells that he can tolerate anything to be with Prachi. Rhea complains about Pallavi’s annoying love. Aaliya reminds that Rhea wanted a loving family.

Later, Pallavi asks the maid to just take care of Rhea. Pallavi asks Dida to choose a designer saree for herself. She shares her happiness. She tells that the family members always wish her, but this year Rhea wished her first. Dida asks is she happy that Rhea has wished her two days ago. Pallavi likes her efforts. Dida mocks her. Pallavi hopes that Rhea does something special and big for her. Dadi wants Pallavi to think good about Prachi as well. Prachi tells Shahana that she is handling the decorations. Dida asks Pallavi to see Prachi’s genuine goodness.

Reviewed Rating for Kumkum Bhagya 5th July 2022 Written Update Weird Prachi: 5/5 This rating is solely based on the opinion of the writer. You may post your own take on the show in the comment section below.