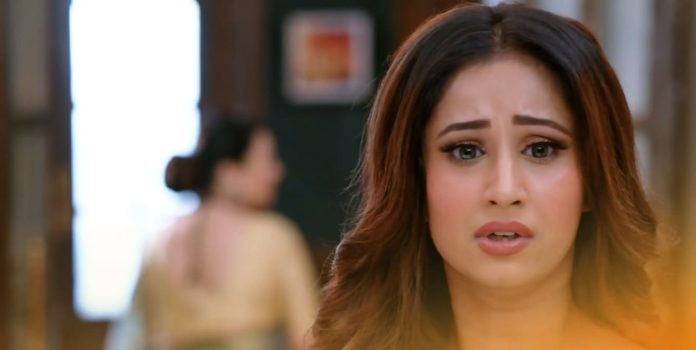 Bhagya Lakshmi Malishka alarmed 9th July 2022 Spoilers Bhagya Lakshmi episode spoiler – Malishka in trouble Lakshmi is worried for Rishi and wonders where he has gone. Malishka is scared that Balwinder might reveal her name and decides to seek forgiveness from Neelam. Neelam questions Malishka. She gets startled. Rishi brings Balwinder and questions him. Malishka gets frightened when everyone looks at her. She gets alarmed seeing Balwinder.

Manushi cannot believe that Mrs. Meet survived after the blast. Masoom informs her that she herself was shocked to see her. Manushi asks her if Manjiri is Mrs. Meet then what will they do. Masoom is stunned. Manjiri makes Fafda and Jalebi. Ragini asks Mr. Meet to have it but he says that he is not hungry. Manjiri takes up the challenge to make Mr. Meet eat the jalebi and succeeds.

Radha asks Mohan if she can ask him something. Mohan agrees. She says that he had told marriage is neither done for family nor for ending one’s sorrows. Mohan nods. She asks him for whom is he getting married. Mohan is stunned.

Siddharth tells Mr. Agrawal that he will not sell Hari Mohan sweets to them. He vows to buy every shop in Mathura of the Agrawals. He gives Agrawals 365 days to save their brand and name. Siddharth tells Hari Mohan that he hates sweets and has to do their business which he doesn’t have any knowledge of. Mithai goes to help Siddharth but he gets irritated and asks her to get out.

Devraj asks Maharaj who kept him locked in the underground cell for so many years. He is scared but Devraj asks him not to get scared as he is with him. Maharaj reveals that Jaya kept him closed in the cell and tortured him a lot. Devraj gets angry and shouts at Jaya. Jaya shoots Devraj and Krisha.

At Kabir’s haldi a guy praises him for his choice. Rahul tells his friends that because of them he has to give a sorry card. He says that he is going to give Masa’s chunar to his sister-in-law. He hopes that this time he will be able to meet her. Pratha is dumbfounded when the door opens.