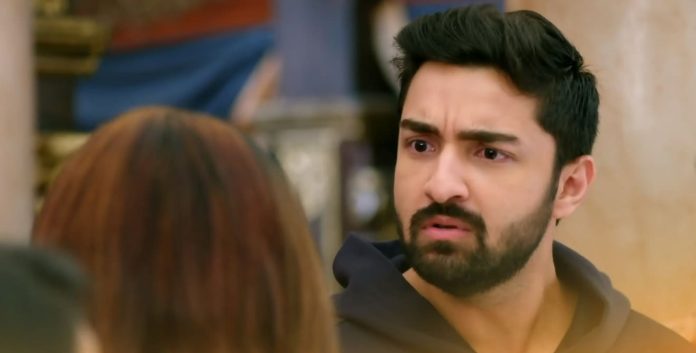 Bhagya Lakshmi 12th July 2022 Written Update Truth for Rishi Rishi threatens Balwinder to the core and asks him to say the truth. Balwinder gets scared for his life when Rishi gets a knife to cut his neck. He stops Rishi. Balwinder tells that he will tell the truth. He signs towards Malishka and then takes her name. He then takes different names to confuse Rishi. Malishka tries to help Balwinder just to protect herself. Ayush tells Rishi that Malishka is behind everything, she had conspired to defame Lakshmi. Malishka asks Rishi to listen to her. He tells that he didn’t expect this from her, he couldn’t imagine this.

He asks her not to say a word now. He tells that he has come on right time and didn’t let her help Balwinder escape. He adds that he has failed her plan. He catches her red-handed when she was helping Balwinder flee from Rishi’s house. Earlier in the show, Rishi defends Lakshmi’s dignity. Lakshmi finds Rishi’s utmost care for her. Neelam asks Rishi not to beat Balwinder so much that the latter dies.

Rishi tells that he won’t let Balwinder die until he tells the truth. Virender wants to call the cops. Rishi tells that he wants to know the truth first. Malishka thinks its her last day in Rishi’s life. She wishes she told the truth to Neelam. Rishi and Ayush threaten of torturing Balwindr. Malishka asks Rishi to stop the nonsense, he will get charged with murder if Balwinder dies. She asks him to not take law in his hands. Rishi asks her to let him deal with Balwinder. Rishi threatens Balwinder. Neelam stops Rishi. Rishi asks her to trust him and let him do what he is doing. Rishi wants the truth from Balwinder, who looks at Malishka. Malishka signs Balwinder to not take her name.

Rishi asks Balwinder to tell the truth. Malishka gets scared when Balwinder looks at her and says he will say the truth. Ayush observes this and thinks why is Malishka stepping back in fear. Balwinder doesn’t take Malishka’s name. He tells that he used to follow Lakshmi and learnt about her pregnancy. Rishi threatens him and bashes him more. Lakshmi asks him to stop it and not invite troubles. He tells that she has tolerated a lot, he will not spare Balwinder this time. He asks her to go to her room if she doesn’t like to see this. He asks Ayush to take Lakshmi away. Rishi continues to ask Balwinder the truth. Ayush asks Rishi to just stab Balwinder and kill him. Rishi recalls how Balwinder tortured Lakshmi and beats him. Malishka feels Balwinder will break down by the tortures. She goes to stop Rishi. She tells that they shall go to the police to find the truth, he shouldn’t take the law in his hand. Kiran asks Rishi if he is taking revenge for Lakshmi. Rishi tells that Lakshmi has tolerated a lot, and now its his duty to protect her. He respects Lakshmi that she has protected his family respect. He asks Malishka not to come in between, he wants to know the person who planned to defame them.

He tells that he doesn’t want any complications in his plan, he wants success. He tells Ayush that they have to know who told Balwinder about Lakshmi’s fake pregnancy. Ayush tells Rishi that the truth has come out, Malishka is behind everything. Malishka asks what is he saying. Ayush tells that he was joking. He asks her not to feel scared, she didn’t do anything. Malishka asks Rishi what was what, why does he behave like she isn’t a family member. He tells her that Lakshmi didn’t think once before risking her dignity for his family’s sake, now its his turn to protect her.

She tells him that whoever has done this, its someone from the family, that family member will be ashamed, and then his family will break, if the name comes out. She asks Rishi to give Balwinder to the police and get him punished. Karishma and Dadi have an argument about Lakshmi. Karishma blames Lakshmi again. She doesn’t know how long they have to tolerate Lakshmi and her inauspiciousness. She calls Lakshmi shameless. Ahana goes angry. She beats Balwinder with her slipper. The family stops Ahana. Ahana tells that Balwinder has accused Lakshmi and insulted her, she wants to beat him. Karishma calls it enough. She tells that they shouldn’t deal with such disgusting people.

Neelam asks Ahana where is her class, how can she beat Balwinder with her sandals. Ahana tells that they had heard Balwinder’s cheap statements against Lakshmi, and now they are talking about class. Neelam asks Ahana not to take an advantage of her love. She warns Ahana and sends her. Balwinder asks Lakshmi to get a glass of water for him. Dadi slaps him. Rishi tells Malishka that he has thought well, there is no one in the family what can spoil the family respect, some stranger has done this, maybe someone from the staff. He tells that nobody can spoil the name of Oberoi family. He tells that he is comparing relations for the last time, Lakshmi has tolerated a lot for Ahana’s respect, and Malishka is asking him to let go the family enemy. He feels disappointed with her.

Reviewed Rating for Bhagya Lakshmi 12th July 2022 Written Update Truth for Rishi: 5/5 This rating is solely based on the opinion of the writer. You may post your own take on the show in the comment section below.