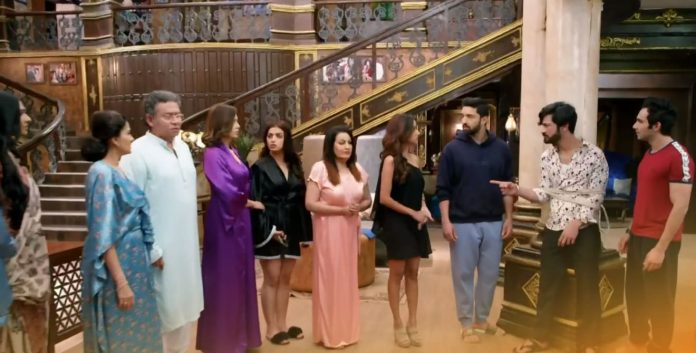 Bhagya Lakshmi 14th July 2022 Written Update Mayhem Malishka plans to make Balwinder out of the Oberoi mansion. She wants Balwinder to go away and not admit any truth to Rishi. She hires some men to send away Balwinder. Rishi sleeps in the living room to keep an eye on Balwinder. She asks the men to just hurry up and take Balwinder. Rishi wakes up by the sound. The men free Balwinder from the ropes. Rishi sees Balwinder freed. He runs to stop him. The men get scared of being caught and run away. Rishi catches Balwinder and ties him up. He asks the same question about Balwinder’s partner in crime. He tells the family that Balwinder wanted to run away, but now he will tell the truth, who is supporting him in defaming the Oberoi family, who told him about Lakshmi’s pregnancy. Balwinder points towards Malishka. Rishi tells Malishka that he didn’t imagine that the person he is searching could be actually her. He asks her not to speak a word more. Malishka is speechless. The entire family stares at her. Keep reading.

Earlier in the show, Kiran blames Malishka for spoiling everything. Malishka doesn’t want to lose courage. She tells that she is ready to do anything to get Rishi. She asks Kiran not to scold her. She tells that she will not leave Balwinder, who has become a threat for her. She doesn’t want Lakshmi to win this battle. Kiran asks her not to play with fire. Malishka tells that they have to make Balwinder out of their way anyhow. Ayush comes at the door. Malishka gets scared sensing he has overheard everything.

Ayush apologizes to Malishka and Kiran for disturbing them. He asks them about Balwinder. Malishka tells that she doesn’t know anything new about him. Rishi tells Lakshmi that she is also a family member. He asks her not to lose her smile. He tells that she shouldn’t think of tomorrow and spoil their mood today. She smiles and tells that she agrees with him, she will always stand by him, she doesn’t want any problem on their family. She asks him to promise that he shouldn’t fall into any trouble. Rishi tells that nothing will happen to him, but to their enemy. Malishka doesn’t tell anything to Ayush. She thinks he didn’t hear her talks.

Ayush tells that she knows something which nobody knows, he had seen Balwinder staring at her, she was signalling something to him. She asks why would she signal Balwinder. Ayush tells that maybe he is wrong. He apologizes. He hopes that Balwinder wakes up soon and tells them the truth. He makes a leave. Karishma tells that she doesn’t know if Rishi has done right or not. Kiran tells that its about maturity, if Balwinder tells anything to the police then Rishi will fall into trouble. Neelam supports Rishi. She admits that his way is wrong, but he is doing right, they should know the person who helped Balwinder from their family, Balwinder can’t do this alone. Virender agrees with Neelam.

He tells that Balwinder was their driver before. Neelam tells that Balwinder didn’t have courage before, someone is with him, its their family’s enemy, Rishi is doing right to find their enemy, nothing should happen to Rishi. She swears that she will handle the family’s enemy. Kiran grows worried for Malishka on hearing Neelam. Rishi continues to beat Balwinder. Lakshmi asks him to stop it. Rishi also gets hurt. Lakshmi takes care of Rishi. Ayush breaks their eyelock. Rishi calls him mad to do such crazy things. Ayush tells that its his fate. He tells that he will play the trumpet in Balwinder’s ears and wake him up. Rishi and Lakshmi shut their ears.

Balwinder doesn’t wake up. Ayush tries hard to wake up Balwinder, but fails. Rishi tells that maybe Balwinder is really in deep sleep. Ayush calls Balwinder’s fate good. Rishi is desperate to know the truth. Ayush asks why is Rishi so desperate. Lakshmi tells that its Rishi’s love. Ayush asks if Rishi loves her. She answers that its his love for the family.

Rano asks Shalu where did she go. Shalu thinks to tell Rano about Balwinder. Rano shouts on Shalu and Neha. Shalu prays that Lakshmi stays okay. Kiran pays the men and ask them to kidnap Balwinder. The men tell that they will kidnap Balwinder and then kill him. She tells them that she will open the door for their entry. She wants Malishka to marry Rishi at any cost. Lakshmi serves the food to everyone in the family. Ahana and Ayush respect her and ask her to sit along with them to have food. Ayush tells that he wants to have the food made by Lakshmi all his life. Lakshmi gets sad.

Ahana insists her to sit. Neelam refuses to have the food with everyone, because the family’s enemy is still not caught. Malishka asks Kiran to stay back in the house. Sonia and Karishma say that it will be soon Malishka’s house when Lakshmi and Rishi get divorced, so Kiran can stay back with all the rights. Lakshmi gets upset. Kiran asks Malishka to open the door at midnight, some men will come and clear the problem for her, they will take away Balwinder. Malishka worries that even Kiran can get caught. Kiran tells that the goons are professional, they won’t get caught.

She adds that Neelam wants to know the enemy, that’s Malishka. She hopes that everything gets fine. Malishka agrees to open the door at 12. Kiran tells her aim that Malishka’s name shouldn’t come out. Sonia meets them. She tells that Rishi won’t leave Balwinder until the latter tells the truth, Rishi is going to sleep in the hall so that nobody helps Balwinder at night. Malishka gets scared. She goes to Rishi. She asks Rishi to sleep. Rishi tells that he will not go to his room. She tells that she will keep an eye on Balwinder. She pretends to care for him. He refuses to sleep.

She tells that she will give him a neck massage, he will feel at peace. Lakshmi reaches there with a pillow for Rishi. Malishka feels she can’t even spend a moment with Rishi. Lakshmi gives the pillow to Rishi. She asks Rishi to sleep. Rishi stays awake and sends Lakshmi to the room. Malishka wants Rishi to sleep in some time. Rishi doesn’t sleep. He asks Malishka to go and sleep. She asks him to just relax and take a nap. Rishi falls asleep. Lakshmi prays that Rishi stays safe.

Reviewed Rating for Bhagya Lakshmi 14th July 2022 Written Update Mayhem: 5/5 This rating is solely based on the opinion of the writer. You may post your own take on the show in the comment section below.