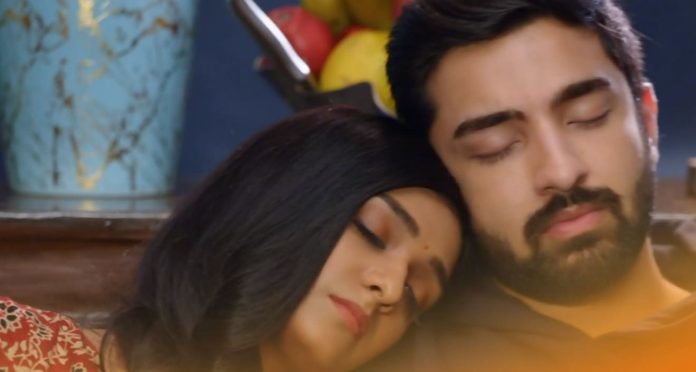 Bhagya Lakshmi 18th July 2022 Written Update Unexpected Malishka is upset that she had to leave from Rishi’s room because of stubborn Lakshmi. She tells that she is sitting worried and awake, while Lakshmi would be peacefully sleeping with Rishi. She wants Balwinder’s chapter to end. Balwinder’s friends come to Oberoi mansion and enter Rishi’s room. They see Rishi and Lakshmi sleeping on the couch. They untie Balwinder and take him out of the room silently. Lakshmi wakes up and shouts Rishi to wake him up. Rishi wakes up and finds Balwinder missing. Balwinder gets conscious. He finds the main door shut. Balwinder and his friends escape by jumping out of a widow. Rishi and Lakshmi look for Balwinder. Kiran and Malishka hear a police siren. Kiran wonders who called the police, while Malishka worries thinking of the reason behind the police’s arrival.

Dadi jokes on Sonia who is sleeping in so much noise. Malishka tells Kiran that he hates Lakshmi. Rishi asks Lakshmi is she good, why did she insult Malishka, why can’t she be normal. She replies that she didn’t insult Malishka, she doesn’t care what he thinks. She stumbles. Rishi holds her and they have a moment. She tells that she won’t say thank you, because she isn’t wrong. She adds that Malishka provoked her to reply. He asks what’s the difference between Malishka and her. She tells that she is good so she spared Malishka. He tells that she claims much rights on him in front of Malishka.

She tells that he is just of her. They have a moment and end their argument with a smile. Malishka tells Kiran that its Lakshmi’s cleverness, Lakshmi is convincing Rishi, she is winning again. Kiran asks her to talk slowly. Malishka tells that Virender and Dadi have also gone on Dadi’s side. Kiran asks Malishka to end this matter first. Malishka tells that she got Balwinder by telling him about Lakshmi’s fake pregnancy, Rishi saved Lakshmi. Sonia wakes up and gets to know the truth from Malishka. She confronts Malishka and calls her move wrong.

Malishka and Kiran defend their intentions and ask Sonia not to tell anyone about Malishka. Someone enters the house, and locks all the bedroom doors. Rishi asks Lakshmi how did she think of marrying a person like Balwinder. He apologizes if she felt bad. She tells that she didn’t feel bad, she had promised her dad that she will get married, it was his dream so her marriage was fixed with Balwinder, she had to agree.

She adds that Rano and Pritam had fixed her marriage and she agreed to marry Balwinder. Rishi tells that everything happens for the own good, so he came in her marriage and met her. She tells him that she had gone in the fire to save her mum’s necklace, not to save Rishi. She adds that she saw him lying in the fire and saved his life. Rishi tells that she never thinks of herself, she could have left him and gone out. She tells that a person’s life is important than a necklace. She is thankful for the good memories. Rishi wipes her tears. He apologizes that he made her cry. They hear a thud and go out to see. Rishi feels someone was there. Lakshmi doesn’t see anyone. She tells that maybe Ayush was passing by.

They go back and keep an eye on Balwinder. Balwinder’s friends are hiding in the house. Dadi asks Ayush to sleep in her room, she is scared. Ayush tells that she has many ghosts to accompany. Shalu calls Ayush. She asks him about the situation in Oberoi mansion. He asks her not to worry. She tells that she is stressed because he is there. Dadi also jokes on Ayush. Ayush tells Shalu that he will call her later. Malishka feels foolish to involve Balwinder in her plan. She prays that Balwinder’s chapter ends. She doesn’t want the truth to come out. She feels Lakshmi would be sleeping peacefully with Rishi. Balwinder’s friends enter Rishi’s room, and find Rishi and Lakshmi sleeping. They rescue Balwinder.

Reviewed Rating for Bhagya Lakshmi 18th July 2022 Written Update Unexpected: 5/5 This rating is solely based on the opinion of the writer. You may post your own take on the show in the comment section below.