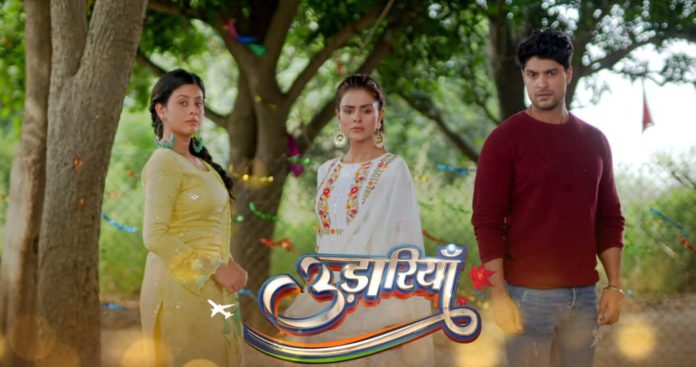 Udaariyaan 23rd July 2022 Written Update Truth for Tejo Tejo finds her room as well as the balcony decorated. Fateh watches Tejo’s expressions from downstairs. He also hides from Tejo. “Naina” song from the film “Dangal” plays in the background. While Fateh recalls his and Tejo’s moments together, Tejo feels confused seeing her room decorated in a kiddish way. She gets confused seeing her hairline filled with vermillion and a nuptial chain in her neck. Then Tejo sees a cushion kept in her room on which Fateh’s name is knitted. This angers Tejo as she recalls the fire incident in which Fateh failed to save her. She throws the cushion on the bed angrily. Satti comes to Tejo’s room. Tejo asks Satti why her room looks like a kid’s room. She asks Satti what happened in the last 9 months.

Tejo also asks Satti why everyone is behaving and talking like she came home after 9 months. She further asks Satti, if the family saw her another face or different behavior in the last 9 months. Satti tells Tejo that she changed very much in the last 9 months. Rupy overhears Satti and Tejo’s conversation. Before Satti could tell Tejo something from her past which can affect her mental health, Rupy stops her. Ruppy asks Tejo to leave all these things for now and just focus on giving peace to her brain.

Tejo asks her parents about Angad ‘s whereabouts. She also asks Rupy to call Angad and make her talk to him. Rupy asks Tejo to talk to Angad later on as the doctor has asked her to have rest. Outside Sandhu house, Fateh wonders where Jasmine would be hiding now. He feels angry and irritated thinking that Jasmine doesn’t stop her evil deeds even being pregnant. Dilraj comes and gives tea to Fateh. Fateh asks Dilrah how Tejo is at present. Dilraj tells Fateh that Tejo is fine. He also tells Fateh that he is happy seeing old and fine Tejo. Fateh smiles hearing this. Dilraj goes back home.

At Sandhu house, family members ask Satti about Jasmine’s whereabouts. Satti tells the whole family that Jasmine will stay at Sweety’s home for the next 2-3 days. Then Fateh sees a teenage girl walking in between the road and hearing songs on her headphones. He also sees a car coming in front of that little girl. Fateh runs and saves the girl. He screams at the car driver for driving recklessly. Hearing Fateh’s scream, disturbed Tejo wakes up and goes to her room’s balcony. She finds Fateh outside her house. Tejo recalls Fateh calling off their roka ceremony. She also recalls Fateh humiliating her, saying that she wants a rich husband for herself having good contacts with high profiled persons.

Tejo further recalls seeing Fateh playing a pendrive which leaked their intimate moments of holi. She recalls Fateh and Jasmine outside the godown, when she and her unborn child were burning alive. Tejo also recalls the doctor telling her that she isn’t pregnant at present. Tejo angrily walks outside the Sandhu house with a thick wooden stick. She goes to Fateh and asks him how dare he is standing in front of her eyes after killing her child. She also asks Fateh why the police freed him from the prison.

Angry Tejo starts beating Fateh brutally with the thick stick. Whole Sandhu family runs behind Tejo. They get shocked seeing Tejo brutally beating Fateh. Sandhu family members try to stop Tejo. Rupy tells Tejo that Fateh and Jasmine are innocent and didn’t try killing her or her unborn child. Tejo asks Rupy why he is lying to her for Fateh. She also asks Rupy why he wants to save Fateh. Tejo tells Rupy that he was right that Fateh is not worth anyone’s trust. This hurts Fateh. Tejo hurts Fateh by saying that she hates Fateh very much. Rupy asks Tejo if she thinks that her father can lie to her. He takes Tejo inside the Sandhu house.

Harman asks Fateh to handle himself. He asks Fateh to consider Tejo’s present condition. Harman also asks Fateh to not give this much pain to himself and return to his home. Inside Sandhu house, Rupy asks Tejo to hear the truth if she wants to. He tells Tejo that whatever happened to her was done by Angad Maan. This information shocks Tejo. Rupy tells Tejo that Fateh and Jasmine didn’t do anything with her. He also tells Tejo that her real culprit is her father. Rupy reminds Tejo that he was the one who forced her to marry Angad. Tejo recalls ill Rupy in the past requesting Angad to accept and marry Tejo.

Rupy tells Tejo that he didn’t know that Angad will turn out to be so cunning and deceitful. He also tells a shocked Tejo that she even lost her unborn child because Angad tried to kill her by burning her. Tejo feels shell shocked. She recalls Angad hugging her and supporting her in times of need. Tejo tells Rupy that she can’t believe this. She says Angad considered her as his friend and they were going to get married. Tejo asks Rupy why Angad will do all this to her. She tells Rupy that he may be misunderstanding Angad. Rupy tells Tejo that there is no room for misunderstanding.

He reveals to Tejo that Angad himself confessed and accepted his crime that he tried killing her (Tejo) by setting the fire at the godown. Rupy tells Tejo that everything had got cleared in the police’s investigation. He also tells Tejo that Angad confessed his crime in front of Fateh and Jasmine, when they went to London. Rupy tells Tejo how Amrik and Jasmine ran away to London because Sandhus and Virks weren’t allowing them to stay together as husband and wife. He also tells Tejo how Amrik and Jasmine called Fateh to London after seeing his lookalike Tanya over there.

She also tells Tejo that Fateh can’t even think of doing anything wrong with her. Tejo regrets for behaving rudely with innocent Fateh and also for beating him brutally out of misunderstanding. Tejo asks Satti how she can forget her own child for so long. Satti tells Tejo that she lost her memories because she lost everything of hers and even her unborn child too. She tells Tejo that she is thankful to Fateh for doing much for her. Satti tells Tejo that maybe god wanted her to forget everything and thus made her lose her memories. She says even God knows that a mother can’t handle/tolerate her child’s death. Both mother-daughter cries. Satti asks Tejo to not worry as God will again bless her with a child.

Tejo cries while hugging Satti. Later, Satti is seen applying haldi to Fateh’s wounds. She apologizes to Fateh for Tejo’s today’s behavior with him. Fateh tells Satti Satti that beating a husband is every wife’s birth right. Satti smiles with teary eyes. Fateh sess Jasmine calling Satti. Satti tells Fateh that because of Tejo’s misunderstanding, Jasmine is hiding at Sweety’s house. Fateh sends Satti to wash her hands. He receives Jasmine’s call and scolds her for still being in Moga. Jasmine tells Fateh that she is not having fun and is living in a single pair of clothes, that too in Sweety’s house’s store room. She asks Fateh if she won’t return home to get her clothes.

Fateh tells Jasmine that it’s her problem. He asks Jasmine to use her story making talent again and go far away from Tejo’s life. Jasmine requests Fateh to give her some time as she had to return home to get her stuff. Fateh tells Jasmine that he is very well aware of her evilness. He threatens Jasmine to leave Moga, otherwise he will give her crime confession recording to police and expose her evil reality in front of the whole world. Jasmine gets scared and angry. She screams out her anger at Sweety. Sweety controls her anger after hearing Jasmine’s bitter and humiliating words. Jasmine says she won’t get scared of Fateh’s threats. She gets determined to do something about it.

On the other hand, Buzzo gets shocked knowing that Tejo beat Fateh a lot. When Fateh refuses to go to the doctor, Buzzo starts calling Simran to complain about Fateh. At the same time, Simran is seen talking to some stranger, who asks her about Candy (Sukhnal). She gets worried when the person questioning her about Candy doesn’t reveal his reality and laughs evilly. The person disconnects the call telling Simran that he will soon reveal his identity. Simran finds this person’s voice familiar. Scared, Simran decides to call and tell Buzzo about all this. Suddenly she gets Buzzo’s call at the same time. Buzzo shows Fateh’s wounded condition to Simran.

Simran gets worried seeing Fateh wounded. Fateh tells Buzzo and Simran that he won’t return home without his wife (Tejo). Tejo recalls Rupy telling her about Angad’s evil reality. She also recalls Satti telling her what all Fateh did for her in the past few months. Fateh runs to Tejo happily on seeing her calling him. Flashbacks of Fateh and Tejo’s past happy moments are shown. “Udaariyaan” title song plays in the background. Fateh wipes Tejo’s tears. In the next episode, Gurpreet will tell Tejo that Fateh filled her hairline with vermilion and made her wear the nuptial chain. Tejo will return her nuptial chain to Fateh. Everyone will get shocked, when Tejo will apologize and refuse to accept her and Fateh’s marriage.

Reviewed Rating for Udaariyaan 23rd July 2022 Written Update Truth for Tejo: 3/5 This rating is solely based on the opinion of the writer. You may post your own take on the show in the comment section below.