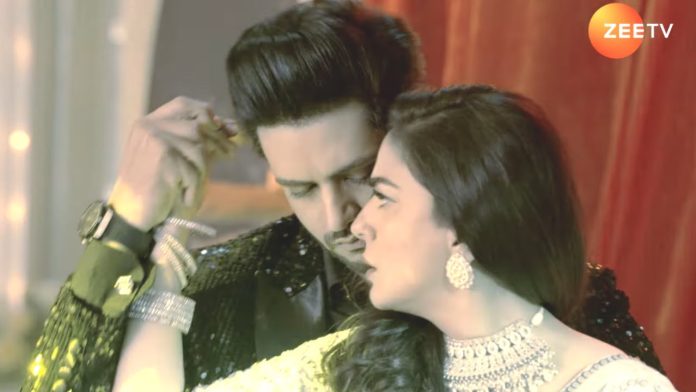 Kundali Bhagya 27th July 2022 Written Update Preeran moment Karan reaches home and finds Anjali in trouble. Vishnu’s boss catches Anjali’s neck and asks her to summon Arjun Suryavanshi. Preeta shares her thoughts about Arjun with Rishabh. Rishabh thinks to call Arjun home and apologize to him. Preeta tells Shrishti that she gets restless when Arjun’s face comes in front of her. Shrishti asks her what exactly is she feeling. Preeta isn’t able to describe. Karan fights the goons, who take him at the knife point and demand the money. Arjun angrily gets a gun to shoot them. He scares the goons away. The goons leave from his house, while he attends a terrified Anjali. Later, Karan comes to the Luthra house on Rishabh’s invite. He collides with Preeta at the gate. She falls into his arms, and they land into a moment. Will destiny bring Preeran together? Keep reading.

Earlier in the show, Karan drinks while remembering Preeta’s words. He remembers Rishabh’s cheat that has given him a big wound. He can’t forgive and forget Rishabh’s evil. He tells that he can’t break down, he can’t forget his revenge, he can never spare Rishabh for the cheat. He tears Preeta and Rishabh’s pic in anger. He promises himself to make Rishabh and Preeta pay for their evil deeds. Anjali receives a shock when she finds Arjun’s hired henchmen at the door. She asks Vishnu why did he come. Vishnu tells that his boss Raja has come to talk to Arjun and get his payment. She asks him to get out, but gets to see Raja intervening.

Kavya does mischief and cheers up Rishabh. She calls him cute like girls. He tells that nobody told him about this before. He finds his nails polished and runs after Kavya. She teases him. He tells that he will complain to Preeta about her. She tells that she will make a puppy face and say sorry, Preeta will say its okay, Preeta won’t get angry. Rishabh asks how will she convince Preeta. Kavya asks if he wants to convince Preeta for something. She tells yes. She tells that she can give him tips. She asks him to do everything that Preeta likes. Preeta comes to the room and asks Rishabh is he okay. Kavya lies to Preeta about Rishabh. Rishabh thinks Kavya is just like Karan, she lies cleanly and acts innocent.

He recalls Karan’s mischief. He smiles happily. Preeta asks Rishabh what did he do to his hands. Rishabh tells that he got saved, else Kavya was ready to apply lipstick to him. Kavya tells that she wanted to see Rishabh wearing a lipstick. Preeta tells that men don’t apply lipstick. Kavya asks if she liked the nail polish. Preeta calls her naughty. Kavya asks Rishabh to clean the room. He tells that she has created the mess, so she shall help him. Preeta knows that they are trying to impress her, when they don’t like to clean the room. She asks them what do they want. Kavya asks him to handle the matter. She runs out of the room. Rishabh tells Preeta that they shall apologize to Arjun, they did wrong with him. Preeta agrees to him.

Anjali falls in danger when the goons attack her and ask for Arjun. Anjali hits a vase on the goon’s head, and runs to her room. She locks the door. Preeta gets ready. Shrishti meets her. She asks Preeta to not hide anything from her, and just share her feelings. Preeta tells that Rishabh wants them to visit Arjun and apologize, but she doesn’t want to go. Shrishti knows that Preeta doesn’t want to apologize. Preeta tells that she feels Arjun deserved that slap. She doesn’t know what happens to her when she faces Arjun. She tells Shrishti that a girl can know about a guy by his behavior, she can know his intentions by his touch, if his touch was good or bad. Shrishti asks her if Arjun touched her wrongly.

Rishabh and Preeta leave for Arjun’s house. He asks Preeta if she is going unwillingly to meet Arjun. She tells that she has slapped Arjun twice, Arjun wants her to say sorry. Rishabh tells that Preeta and Karan used to fight in the same way. He asks her to say thanks and sorry from her heart. She tells that she is ready to say. He tells that if she is feeling forced to say, then he will say it from her side. She tells that Rishabh and Kavya act cute and convince her for anything. Rishabh thanks her for giving him such a nice child, Kavya is too smart. Preeta calls her naughty. He tells that Kavya gave him tips to convince her. Anjali asks Arjun not to open the door, they shall call the police.

Arjun opens the door. The goon asks for the payment. Karan tells that Vishnu had almost killed Rishabh, its not about money, but of ethics. He adds that Vishnu has done a wrong thing and gave him stress. The goon demands the money with interest. He threatens him about Anjali. Karan gets mad at him. The goon asks him if he loves Anjali. Karan catches his collar. The goons keep the knife at his neck. Karan tells that he will take just 2 seconds in killing all of them. He threatens them by showing the gun in his hand. The goons get scared and run away. Karan stops them and asks them not to make a mistake like fools. He tells that he will forgive them if they apologize to Anjali. Anjali slaps Vishnu. Vishnu tells that he is okay with the slap. He apologizes. The goons apologize, feeling terrorized of Arjun. Karan asks them to get out. Anjali feels protected with Arjun.

Reviewed Rating for Kundali Bhagya 27th July 2022 Written Update Preeran moment: 4/5 This rating is solely based on the opinion of the writer. You may post your own take on the show in the comment section below.