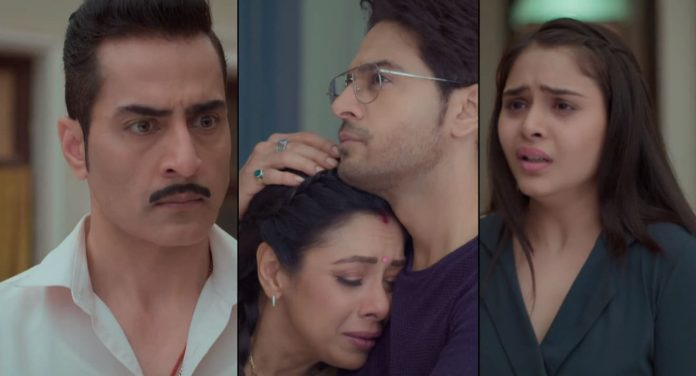 Anupama tells Anu that she should learn and understand everything by questioning. Anuj notices this mother-daughter (Anupama-Anu) bond and smiles. Anupama in her thoughts says that one woman has to handle approximately 100 relations. She prays to God to keep all her relatives safe. Anuj tells Anu that today she will go to Shah house. He says he will handle all the school work today. Anuj hugs both Anu Anupama. At Shah house, on a video call, Pakhi apologizes to Adhik, saying that her parents always mess up everything. Adhik tells Pakhi it may sound cheesy but he can tolerate anything for her.

Pakhi tells Adhik that sounds groovy. Pakhi feels happy hearing Adhik addressing her as “Pakhu”. Adhik keeps on indirectly manipulating and provoking Pakhi to keep on meeting him. He gets stunned when Pakhi says, “I love you” to him. Adhik says the same to Pakhi. This makes Pakhi feel happy and shy. Adhik and Pakhi decide to meet each other, outside the latter’s college. At Kapadia house, Anupama starts preparing for “Shravan Maas”. Anu asks Anupama why people visit the temple in Shravan Maas. Anupama explains all this to Anu. Sara hears all this very carefully. Anupama tells Kapadias that she is going to organize a veneration (pooja) of 1001 Mahamrityunjay Mantra Jaap for both Shahs and Kapadias.

Ankush asks what will happen with this. Anupama explains to everyone that this Mahamrityunjay Mantra Jaap keeps the family safe from any upcoming death. Anu leaves to tell GK about all this. Barkha says it’s good as in Sawan month all girls of the family should come home like Pakhi, Kinjal and Sara. She says Pakhi remains very tense these days. Anuj asks Barkha to let Anupama worry about Pakhi. He also asks Barkha to not try coming in between Anupama and Pakhi. This angers Barkha and Adhik. Ankush tries defending Barkha and Adhik by saying that they both aren’t doing anything. Anuj tells Ankush that he didn’t even take Adhik’s name.

This shocks and scares Barkha, Adhik and Ankush. Anuj in a warning tone tells Adhik that whatever happened yesterday shouldn’t get repeated. Barkha tells Anuj that he can’t talk to Adhik like this. Anuj asks Ankush if Adhik is not family. He says one can scold another family member. Ankush tells Anuj that he can even slap Adhik. This shocks Barkha and Adhik. Anuj says he doesn’t want such a situation to arise in which he might get forced to slap Adhik. All this, tenses up Adhik, Barkha and Ankush. Anuj asks Ankush to make Adhik join the work with him. Ankush says okay. Adhik feels angry, while Barkha and Ankush feel helpless.

At Shah house, Baa expresses objection to seeing Pakhi getting ready beautifully to attend college. Kavya defends Pakhi. Later, Pakhi tells Vanraj that her first 2 lectures got canceled and thus she has to reach college late. Vanraj gives 500 rupees to Pakhi for taking a cab to college. This stuns everyone. Pakhi asks Vanraj if he won’t come to drop her at the college. Vanraj tells Pakhi that she asked him for a chance and thus he is giving her that. Pakhi thanks Vanraj. Baa tells Vanraj that he is making a big mistake by giving a chance to Pakhi. She says youngsters easily lie to their families. Vanraj requests Baa to not interfere between him and Pakhi.

Anupama says yes. She tells Anuj that they should try celebrating upcoming festivals with the whole family together and happily. Anuj says okay. He tells Anupama that he decided that he will talk to Barkha and Ankush and tell them everything. Anuj requests Anupama to not stop him while he will be doing this. Anupama says okay. Ankush overhears all this and wonders what Anuj is going to do. At Shah house, Kinjal praises the kheer by saying that it’s very tasty. Rakhi arrives at Shah house at the same time. This irritates everyone. After having a funny and irritating argument with Baa, Rakhi goes to meet Kinjal.

Kinjal tells Rakhi that she is fine. After this Rakhi gets stunned seeing a sweet version of Kavya. Rakhi tells Bapuji that she has booked the best suite room for Kinjal’s baby’s delivery in Ahmedabad’s best and biggest hospital. This angers Baa. Vanraj argues with Rakhi. Rakhi says she also has equal rights on Kinjal. She says usually the first delivery takes place at the pregnant woman’s maternal home. Baa and Rakhi argue with each other. Rakhi tells Baa that she wouldn’t be able to take care of Kinjal after delivery as there will be lots of work, which even she knows about. She says she would have let Kinjal deliver her baby in Shah’s presence if Anupama would have been here.

Baa gets angry and says she can take care of both Kinjal and her baby. Rakhi says the truth can’t be denied that no one except Anupama can take proper care of Kinjal and her baby. Angry Kinjal screams, telling everyone that she has got frustrated by seeing everyone always fighting over the same thing. She says she is not a kid and can take care of herself as other new mothers do. Kinjal reminds Rakhi that she already told her that her delivery will take place in her in-law’s house. She even scolds Baa for fighting on every small thing. Kinjal asks everyone to decide what is important for them, her happiness or their stubbornness.

Kinjal gets tense and unwell. Vanraj gives water to Kinjal and Kavya asks her to take deep breaths. Rakhi apologizes to Kinjal. She tells Kinjal that being a mother she feels worried about her and speaks more than necessary. Baa also apologizes to Kinjal. Kinjal calms down. Vanraj declares that Kinjal’s delivery will now take place in Shah house. Rakhi gets convinced seeing Kinjal’s critical condition. Rakhi calls someone named Nancy and asks her to pack her bag as she is shifting to Shah house from tomorrow. This shocks Shahs. Seeing everyone shocked, Rakhi asks what happened.

Rakhi tells Shahs that they had an objection with Kinjal shifting to her maternal home, so she decided to shift to Shah house. Rakhi says that she will stay at Shah house, till Kinjal delivers her baby. Anu arrives at Shah house with balloons for Kinjal’s baby. Rakhi asks Kinjal who this girl is. She assumes that Anu is some neighbor’s child and calls her cute. Anu tells Rakhi that Shah house is her mother’s house. Anupama comes inside and Rakhi gets shocked knowing that Anu is Anupama’s daughter. Pakhi comes downstairs and angrily asks Anupama why she came to her house.

She tells Anupama that if she (Pakhi) can’t visit or stay at her house (Kapadia house), then she (Anupama) can’t visit or stay at her house (Shah house). Pakhi asks Anupama to leave with Anu as there is no place for her (Anupama) and her lovable daughter (Anu) in her house (Shah house). Pakhi’s words or behavior shocks everyone. Anupama reminds Pakhi that she is talking to her mother. Pakhi asks Anupama to stop her drama of being her mother. Rakhi enjoys all this. Vanraj asks Pakhi to behave herself in front of her mother. Pakhi says Anupama thinks that she is only Anu’s mother. Anupama hugs a scared Anu.

Baa silently agrees with Kavya. Kavya tells Pakhi that she is doing her usual monthly drama today and that too in front of a little kid. Pakhi taunts Kavya for lecturing her on moral science after deceiving Shah family and keeping an extra-marital affair with Vanraj. She asks Kavya to let her co-wife (Anupama) be a co-wife and not make her her friend. Anupama and Vanraj angrily ask Pakhi to shut up. Pakhi asks Vanraj to not interfere in her matters as even she doesn’t interfere in his, his current wife and ex-wife’s matters. Pakhi’s stubborn behavior and attitude shock everyone.

Anu requests Pakhi to not argue with her mother. Pakhi rudely asks Anu to keep quiet. Anupama scolds Pakhi for talking rudely in front of a kid. Pakhi indirectly tells Anupama that she discriminates between Anu and her. She calls Anupama stone-hearted. Anupama reminds Pakhi that she always hugged her and her heart while crying out her pain. She also reminds Pakhi that she and her heart always failed to curse her for her regular and usual bitter words. Pakhi says drama started. Everyone gets shocked by Pakhi’s words and tone. Rakhi enjoys all this.

In the next episode, Pakhi will tell Anupama that she was a perfect mother, mother-in-law, and perfect daughter-in-law, till she had nothing. She will accuse Anupama of getting haughty after becoming a Kapadia. This shocks everyone. Pakhi will tell Anupama that at Shah house, Vanraj didn’t value her, but now Anuj wanders behind her like a wife’s slave. Anuj while driving will think that his Anupama is tolerating much these days. He decides that he won’t tolerate all this anymore. At Shah house, Anupama will angrily tell Pakhi that children like her want their mothers to sit at the house’s corner and work the whole day like a servant /maids. Anupama will tell Pakhi that children like her like a mother only when she is helpless and poor. Pakhi will look angrily at Anupama.

Reviewed Rating for Anupama 28th July 2022 Written Update Anupama’s answer: 3/5 This rating is solely based on the opinion of the writer. You may post your own take on the show in the comment section below.