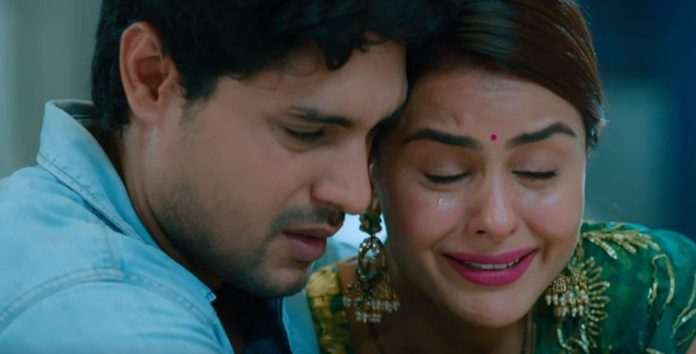 Udaariyaan 1st August 2022 Written Update Shattering news Tejo gears up for a new morning, when she receives a message from Jasmin. She gets reminded of Fateh and Jasmin’s bad terms, and also how Virks aren’t supporting Jasmin. She speaks to Fateh to forgive Jasmin and move on, because the latter has lost her husband Amrik because of her. She feels guilty that Jasmin’s child wont have a father, just because of her. Fateh tells that he will do like Tejo wants him to do. He doesn’t upset her. He understands that Jasmin spoke to Tejo and brainwashed her, and Tejo is getting emotional because of Jasmin’s baby. Fateh and Tejo meet the doctor, who gives them the good news of Tejo’s reports coming clear. She tells them that she suggests an ultrasound because Tejo wants to start a family.

Fateh gets rejoicing on knowing Tejo’s decision, and confirms it by asking her. Tejo tells that she wants to have a family with him. They both stay happy. Tejo goes for the tests. Doctor soon gets the ultrasound reports and bursts the happy bubble, telling them that she is really sorry to say that Tejo can never conceive a child, because of her earlier miscarriage damaging her fallopian tubes. She adds that if Tejo underwent a treatment nine months back, then she might have got rid of the problem, but now its too late. Tejo and Fateh break down knowing they can never become parents.

Tejo goes out and sees a little child. She hugs the child emotionally. Fateh gives courage to Tejo, saying they both are enough for each other. Fateh and Tejo share each other’s sorrow. He tells her that they love each other and their love will be enough to lead a happy life. Fateh and Tejo return home, and feel shattered seeing the family’s expectations about their child. Gurpreet blesses Tejo to have a child soon. Tejo goes to her room and cries profusely, unable to share the truth with the family. Fateh follows Tejo. They both vent out their sorrow through tears. Keep reading.

Tejo is seen combing her hair. She receives a text from Jasmine. Through this text, Jasmine asks Tejo how she is. Jasmine also asks Tejo to take care of herself and be happy. Tejo recalls Jasmine telling her that everyone at Virk and Sandhu house hates her. She also recalls Jasmine telling her that Fateh suspects that she (Jasmine) tried to burn and kill her (Tejo) since she (Tejo) blamed her and Fateh for the fire incident that occurred 9 months ago. She further recalls Jasmine accepting she made a lot of plans against her (Tejo) in the past.

She tells Jasmine that she will ask Fateh why he is doing all this. This scares and worries Jasmine as she recalls Fateh telling her that Tejo will now be able to handle knowing the fact how low her sister (Jasmine) has stooped. Jasmine pretends to be stressed and makes Tejo swear at her child. She tells Tejo that if she will tell or ask anything to Fateh, then he will hate her more. Tejo promised Jasmine that she will try to solve her problem without talking to Fateh. As Tejo hugs Jasmine, the latter smiles evilly. Flashback ends. Unaware of the evil truth about Jasmine, Tejo tries convincing Fateh to be good with Jasmine.

Hearing Tejo’s lot of requests, Fateh helplessly promises Tejo that he will be good with Jasmine. Fateh asks Tejo to take care that no one takes the wrong advantage of her emotions. Tejo moves her head in yes. Fateh goes inside the bathroom. He feels angry recalling Tejo requesting him to be good with Jasmine. Fateh understands that surely Jasmine would have made Tejo do this by pretending to be a good person. He thinks that it can be very dangerous for Tejo that Jasmine has made her believe that she is a nice person. Fateh decides to think about something to answer Jasmine’s evil ploy.

Later, Mahi is seen tying Rakhi to Fateh. In a goon’s tone, Mahi asks Fateh to give her her Rakhi gift amount. Everyone laughs witnessing the brother-sister’s banter. Fateh hands over a bundle of money to Mahi. He tells Simran that her gift amount is included in it. Fateh through expressions asks a tense Simran if she is tense about something. Simran through expressions says, “it’s nothing”. She then ties Rakhi on Fateh’s wrist. At the same time, Abhiraj and Navraj arrive at Virk house. Tejo runs and hugs her brothers. She asks her brother, where is Dilraj? Navraj tells Tejo that Dilraj is preparing for his math exam. He asks Tejo to tie Dilraj’s Rakhi to him or Abhiraj only.

Tejo starts tying Rakhi to Abhiraj. Abhiraj feels guilty for his past behavior with mentally unstable Tejo. Through expressions, Tejo asks Abhiraj what happened. Through expressions only, Abhiraj says, it’s nothing. After this, Tejo ties Rakhi to Navraj. Abhiraj receives a call and starts leaving, saying that he has some urgent work. Suddenly, a voice recording plays through the Rakhi tracker. This voice message contains Abhiraj’s voice saying that “Tejo is his most lovable sister, Happy Rakshabandhan”. The voice message in Abhiraj’s voice says that Abhiraj is promising that he will be with Tejo every Rakhi. Abhiraj guiltily turns his head towards a smiling Tejo (unaware of the truth).

Later, at the hospital, the doctor tells Tejo that now she is absolutely fine, according to her reports. This makes Tejo and Fateh happy. Then the doctor says that only an Ultrasound is left to be done. Fateh asks the doctor what is the need for an ultrasound. The doctor tells Fateh that after Tejo’s miscarriage, no tests of Tejo were done and a full checkup of Tejo is necessary to be done. Seeing Fateh confused, the doctor tells Fateh that Tejo wants to start a family. Surprised Fateh asks Tejo if she is sure. Tejo says she is sure. At Virk house, Nimmo asks Fateh’s grandmother and Gurpreet to ask Tejo to give Virks, their heir. Gurpreet tells Nimmo that Tejo just got up from old wounds.

Nimmo tells Gurpreet that new happiness helps in healing old wounds. She tells Gurpreet and Fateh’s grandmother that yesterday she heard Satti asking Tejo to start a family. Gurpreet asks Nimmo what Tejo replied to her mother. Nimmo tells Gurpreet that Tejo would have said yes only. Gurpreet says she hopes that by God’s blessings, Tejo’s all reports turn out good. She says after that she will herself talk to Tejo. As Tejo returns after getting her ultrasound done, Fateh asks Tejo to take more time, if she needs it as he is in no haste. Fateh tells Tejo that for him, her health is most important.

Tejo tells Fateh that she made this decision after thinking a lot. She also tells Fateh that she might forget all her sorrows in the happiness of the arrival of their baby. Fateh kisses Tejo’s forehead and they touch their foreheads with each other, with a big smile on their faces. The Doctor arrives and gives bad news to Fateh and Tejo. Fateh and Tejo get shocked when the doctor reveals that Tejo can never become a mother. The doctor tells Tejo that her fallopian tubes have been damaged due to miscarriage, because of which, she will never be able to conceive. Fateh and Tejo get shell-shocked when the doctor tells them that nothing can be done in Tejo’s case.

She explains to Fateh and Tejo, that if Tejo’s treatment would have been done immediately after her miscarriage, then doctors would have been able to do something. The doctor apologizes to Fateh and Tejo saying that it has been 9 months after Tejo’s miscarriage and now nothing can be done. She says even other doctors will say the same thing. As the doctor leaves her cabin, broken, Fateh and Tejo hug each other. Tejo runs outside the hospital and recalls the doctor’s, Satti’s words, Nimmo’s words. A person gives sweets to Tejo outside the hospital, saying that he became a father just now. Tejo cries and recalls Fateh getting happy with her decision about starting their family.

She also recalls seeing Fateh playing happily with Candy. At the same time, Tejo sees a man unable to handle his little crying daughter properly. She takes the little crying girl from the man and makes her laugh by playing with her. Fateh witnesses all this. He feels sad seeing upset and broken Tejo trying to make a crying kid laugh. Tejo gets emotional as the little girl leaves with her father. Fateh goes to Tejo and tries to handle her. Tejo asks Fateh to let her go away from his life as she doesn’t want to ruin his life. Fateh asks Tejo to never say this. Tejo tells Fateh that she can’t tolerate all this. She also tells Fateh that they get just 2 moments of happiness and then a mountain full of sorrows bursts on them.

Tejo asks Fateh why can’t they remain together happily. Fateh wipes Tejo’s tears. He tells Tejo that they are enough for each other and will tolerate everything together. Tejo asks Fateh if so many women in the world can become a mother, then why can’t she? She says everyone dreams to have their own family and have a child who can address them as a mother or father. Tejo tells Fateh that she will never be able to give him a family or a child who can call him “papa”. Fateh explains to Tejo that marriage doesn’t just mean having a child and a family. He reminds Tejo that he happily married her even when she didn’t understand such married life responsibilities.

Fateh tells Tejo that for him, just she is important and no one else. Tejo tells Fateh that it’s his unconditional love that he can’t see their lives’ biggest drawback. She also tells Fateh that she can’t live with the fact that she can’t give him children, even knowing how much he loves kids. Tejo tells Fateh that their whole family is waiting for their family’s heir and she won’t ever be able to end their wait for their heir. She breaks down in Fateh’s arms. Later, Fateh and Tejo return home. Fateh tells the family that they went to the temple after meeting the doctor. Tejo distributes prasad to everyone.

Reviewed Rating for Udaariyaan 1st August 2022 Written Update Shattering news: 3/5 There must be more of Pranbir moments in the show This rating is solely based on the opinion of the writer. You may post your own take on the show in the comment section below.