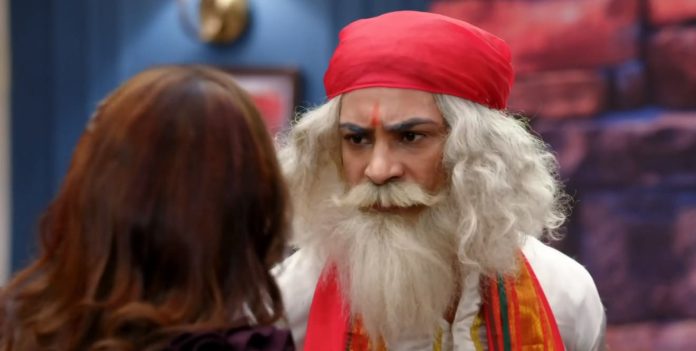 Bhagya Lakshmi Balwinder returns 8th August 2022 Spoilers Bhagya Lakshmi episode spoiler – Malishka bribes Balwinder Balwinder comes disguised as a priest. Malishka tells him after she gets Rishi she will shower him with money. Dadi asks Lakshmi and Rishi to cut the cake together. Malishka is stunned. Virendra welcomes Durga Devi and says that she has come at the right time. She says that police should reach everywhere on time. Balwinder gets scared. Lakshmi gets an electric shock. Rishi tries to revive her.

Mr. Meet tells Manjiri that when he saw her in the garba event his heart told him she is her only as Meet was standing in front of the Meet. He says that his heart was telling the truth that day and her eyes are not able to lie. Mr. Meet gives her a last chance to tell her intention behind coming into his house. Mrs. Meet is in dilemma.

Gungun comes to know that Hriday is a murderer. He goes to tear the newspaper but she hits him with coconut and runs away with it. Gungun hides. Hriday says that if she comes out he will forgive her but if he finds her then she will never go home. She gets scared but tries to escape. Hriday catches her and throws her into the borewell.

Shubham says that today is their first day and if the sweets are not sold they will go into a loss as they don’t have a fridge to store them. Mithai tells that Gopal is her business partner and he will not let them go into a loss. She prays to Gopal to sell all her sweets. Siddharth confronts Apeksha and she blackmails him to marry her. He is shocked.

Ranveer decides to separate Suhani from her family members and make her lonely. He thinks that she will not have any option than returning back to him. Suhani’s grandmother asks an astrologer to predict her future. He says that she has to return back to the place where she started the fight.