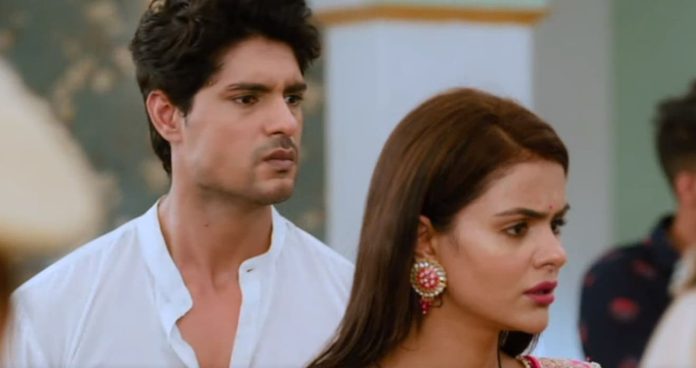 Udaariyaan Fatejo rain dance 8th August 2022 Spoilers Udaariyaan episode spoiler – Fatejo’s rain dance Fateh tells Tejo that everything is fine now. She says that it is the silence before the storm. Fateh gets worried. Tejo and Fateh romance in the rains. Amanpreet tells Fateh that he will die of a heart attack if he gets so much angry and informs Tejo that she will become a widow. Tejo calls Amanpreet a dirty ditch. He gives a flying kiss to her.Banni Chow Home Delivery episode spoiler – Manini welcomes Banni:

Banni and Yuvan get married. Manini calls all the family members to welcome the new daughter-in-law inside the house. Banni is shocked. Manini says that Yuvan and Banni make a nice couple. She says thank you to Banni for marrying Yuvan. She hugs Banni and says that she has learned from her to win the war with love rather than hatred.

Harsh declares that he is the owner of the house now. He says that he will not allow anyone to stay in the house. Harsh asks everyone to get out of the house. He pushes Gagan and asks them to beg. Pallavi informs Harsh that she is his mother but he refuses. He asks her to leave along with her favorite kids.

Saavi takes part in an auto-rickshaw competition. She tells Chatriprasad that they have to win for her family’s happiness. Her auto gets stuck in the mud. Nityam gets out of his car and says that these people don’t value others’ time and helps her. He notices that she is a rickshawali. Saavi says thank you and proudly encounters all the male auto drivers.

Shesh Nag tells Pratha that after completing the last part she will win the swayamvar. She says that she has to fight with death before winning anything. Mahek comes in her true form and declares that Pratha has begun the game and now she will finish it. Nashika attacks Pratha. Mahek says that now she will become the Shesh Naagrani.

Parineet takes a knife and cuts her hand. Rajeev assures Neetii that he only loves her. Parineet falls down unconscious and Monty runs towards her. Rajeev and Neetii are shocked to hear the commotion.