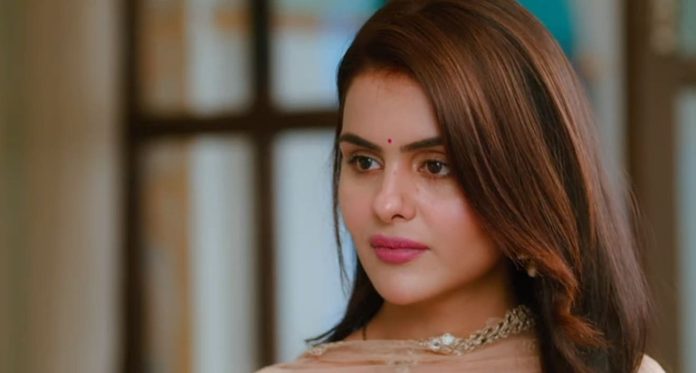 Udaariyaan 9th August 2022 Written Update Tejo in trouble Transgenders arrive at Virk house. The whole Virk family gets stunned and asks the transgenders why they came to their home without any news. One of the transgenders says they came to give and take blessings as a new daughter-in-law came to their (Virks) house. Fateh’s grandmother asks Tejo to take blessings from transgenders as their blessings are considered very effective. Transgenders bless Tejo to always be happily married. Transgender asks Virks where their other daughter-in-law is, who is pregnant. Gurpreet asks Simran to bring Jasmine. Simran leaves to get Jasmine.

All Virks dance and enjoy being unaware of what is happening. A transgender informs Amanpreet that they did his work. On the other hand, tense Jasmine is seen searching for her fake stomach in her room. Simran suddenly enters Jasmine’s room. Jasmine gets stiff and shocked. She hides her stomach using her dupatta. She acts dizzy to fool Simran. Simran worriedly asks Jasmine what happened. Jasmine tells Simran that her head is aching a little. Jasmine suddenly notices that her fake stomach belt has fallen under the table. Simran stands up to get water from the tabletop for Jasmine.

Jasmine stops Simran. She tells Simran that she doesn’t want anything. Jasmine asks Simran to inform everyone downstairs that she is resting upstairs. Simran leaves Jasmine’s room. Jasmine runs and picks up her fake stomach. She feels irritated by everyone entering her room without knocking. Simran returns and tells everyone that Jasmine is a little ill and is resting. Gurpreet tells transgenders that they will call them again when Jasmine’s child will take birth. Transgenders tell Gurpreet that they will take large amounts after the child’s birth.

Gurpreet tells transgenders that she will happily give them large amounts of money after the child’s birth. Outside Virk house, Candy refuses to take the toy car from Amanpreet. He asks Amanpreet why he again came to scare his mother. Amanpreet asks Candy why he will scare him as he is his father. Candy says his father’s name is Buzzo. Amanpreet tells Candy that Buzzo is a dog name. He also tells Candy that his father’s name is Amanpreet Singh Bajwa. He drags Candy and shows him some pictures of him and Simran from Canada.

Amanpreet asks Candy to come to Canada with him. He tells Candy that he will fill the full house with toys for him. Amanpreet also tells Candy that in Canada he will get a lot of friends and chocolates. He asks Candy if he will come to Canada with him. Innocent Candy, unaware of Amanpreet’s evil intentions, says yes. Transgenders leaves and Simran finds Candy missing from home. Everyone gets worried for Candy and starts searching for him. Tejo finds Candy outside the house with Amanpreet. She runs and separates Candy from Amanpreet.

Tejo calls the whole family outside. Everyone runs to Candy. Mahi takes Candy inside on Tejo’s instructions. Amanpreet behaves cheaply with Tejo. Amanpreet tells Tejo that they together would have also had a child, like Candy, if he would have found her earlier. Fateh comes outside, grabs Amanpreet’s collar, and pushes him away. Amanpreet tells Fateh that he has filed an advance FIR against the whole Virk family. He threatens to get the whole Virk family arrested. Amanpreet reveals that he has filed Candy’s custody case in the family court.

This shocks Virks. Tejo calms down an angry Fateh. Amanpreet screams and says his and Candy’s DNA matches and thus he is Candy’s biological father. Buzzo grabs Amanpreet’s collar and asks him to shut his mouth and leave. Fateh angrily tells Amanpreet that he won’t get Candy at any cost. He scrapes Fateh’s pain and pokes him saying that he will never be able to become a father. Amanpreet laughs evilly. Fateh gets angry and picks up Amanpreet on his shoulder to throw him out of his house. Khushbeer, Tejo, and Buzzo stop Fateh.

Later, Simran gets worried when Tejo says that there are more chances of Candy’s custody case going in Amanpreet’s favor as he filed the case on DNA basis. Fateh tells a tensed Simran that their lawyer told them that Amanpreet can get at least partial custody of Candy on the basis of DNA reports. Buzzo asks Fateh if there is any solution or way to solve this issue. Fateh says they can win this case if they somehow prove that Amanpreet is a criminal and it’s not safe to give Candy to him.

Tejo also asks Fateh to not do anything that can make the custody case against them. Fateh agrees to Tejo’s instructions. The whole family assures support to Simran. The doorbell rings and Fateh opens the door. This turns out to be a parcel containing an oil, which Tejo ordered for Jasmine. Tejo informs the whole family about the same. Tejo and Gurpreet visit Jasmine. Tejo tells Jasmine that she is thinking of getting her enrolled in yoga classes meant for pregnant women organized in Model town. She explains to Jasmine that all this will help her during pregnancy time and delivery.

Gurpreet tells Jasmine that Tejo ordered an ayurvedic oil for her. She explains to Jasmine that not even a single stretch mark will appear on her stomach if she will apply it daily. Gurpreet leaves to get a towel for Jasmine. Jasmine tells Tejo that she is feeling shy about getting a massage. Tejo asks Jasmine to not get shy of her as she is her elder sister. Jasmine refuses to get an oil massage done by Tejo. Tejo just like an elder sister shuts Jasmine. Jasmine pretends to be in pain.

She convinces Gurpreet and Tejo to not apply oil to her. Gurpreet and Tejo leave, asking Jasmine to rest. Tejo again finds Jasmine’s behavior suspicious. Jasmine relaxes and covers her room with curtains. She decides to somehow keep herself away from Tejo. Later, Tejo is seen preparing food and cutting vegetables. She recalls how Jasmine is, again and again, trying to keep her away from her. Tejo keeps on recalling Jasmine’s weird behavior. Gurpreet meets Tejo in the kitchen. She tells Tejo that there is “Sukhmani Sahib Paath” organized at the minister’s home.

Gurpreet tells Tejo that the whole family is going to the minister’s home. She says they will also discuss Simran’s case with the minister. Tejo tells Gurpreet that she will stay at home with Jasmine. She says Buzzo and Simran went to make Candy meet his grandparents. Tejo says Fateh also went with Candy as he doesn’t want to leave Candy alone. Gurpreet asks Tejo to take care of everything as only she and Jasmine will be at home. Later, Amanpreet is seen outside Virk house’s gate, laughing evilly. Tejo is seen going for a bath. Amanpreet enters Virk’s house using a duplicate key, the prints of which he had stolen from the Virk family home using a transgender’s help.

Reviewed Rating for Udaariyaan 9th August 2022 Written Update Tejo in trouble: 3/5 This rating is solely based on the opinion of the writer. You may post your own take on the show in the comment section below.