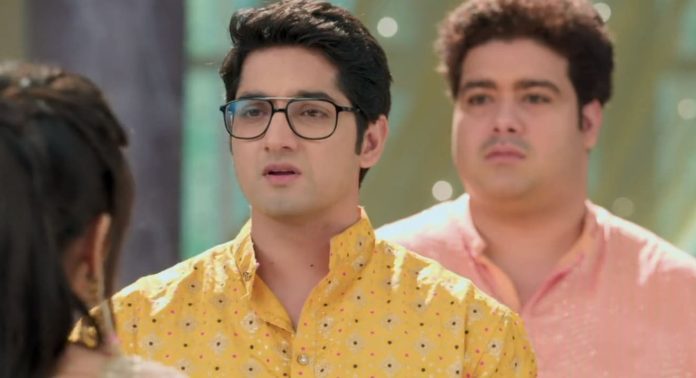 Yeh Rishta Shock for Kairav 10th August 2022 Update Swarna requests Suhasini to calm down and trust that Anisha didn’t order a sleeveless and deep blouse. Suhasini says Anisha is making excuses as she got exposed in front of everyone. She says everyone will regret it if Anisha’s behavior is not fixed. Abhimanyu and Akshara return home and get shocked to witness an angry Suhasini. Abhimanyu and Akshara ask everyone what happened. Anisha tells Abhimanyu that she ordered a lehenga from her friend but the wrong one came. She says a little revealing lehenga got delivered and Suhasini thinks that she is going to wear a revealing lehenga at the wedding.

Akshara clears out all the misunderstandings and proves Anisha innocent. She proves that the shop owner got confused in lehenga no. 13 and lehenga no. 30. Seeing Anisha upset, Abhimanyu asks Suhasini how will the image that she has built for Anisha inside her will change. He reminds Suhasini of the day she said that she accepted Anisha. Abhimanyu tells Suhasini that now it doesn’t seem that she wholeheartedly accepted Anisha earlier. Akshara asks Abhimanyu to calm down. She reminds Abhimanyu that the doctor has asked him to be calm and composed.

Abhimanyu tells Akshara that he won’t be able to be at peace till he gets an answer to his question. He asks Suhasini if she really wants to accept Anisha and give her a chance. Abhimanyu says if we make a deep opinion about someone, it becomes either impossible or very difficult to change. He asks Manish how will Anisha and Suhasini’s relationship change if they won’t even try changing it. Abhimanyu says if not tried, then Suhasini will always raise questions at his sister. He says it’s not possible that Anisha will always have the proof to defend her or prove herself innocent. Manish tells Abhimanyu that they won’t let anything wrong happen with Anisha.

Mahima explains to Abhimanyu that slowly everything will sort out as at present Suhasini and Anisha’s relationship is new. Abhimanyu says between Kairav and Anisha’s love for each other, something seems wrong or lacking. He asks Suhasini and Goenkas to take some time and rethink everything once again before reaching a final decision. This shocks and tenses everyone, especially Anisha. Akshara tries to defend Goenkas and Suhasini in the present confusion matter. Akshara recalls hearing a man lying to a girl named Anisha on a voice note, that he has got cuts and is injured. This man also tells Anisha that he has arrived at Birla hospital for treatment. Flashback ends.

Akshara diverts the topic and everyone’s attention toward what Dr. Kunal said about Abhimanyu’s hand. Manish tells Akshara that they are very happy hearing that there are 99% chances that Abhimanyu’s hand will get fine or back to normal again. Akshara requests everyone to not spoil their mood as it’s a very happy day today. Abhimanyu says let’s celebrate Raksha Bandhan. Anisha leaves making an excuse of bringing thalis. Akshara still finds Anisha’s behavior suspicious. Later, Manjiri is seen making happy Abhimanyu eat sweets.

Abhimanyu tells Manjiri that Anisha made mistakes in the past. He explains to Manjiri that today’s argument will repeat again and again if Suhasini will always remember old things. Manjiri tells Abhimanyu that she isn’t saying that it’s not wrong but it is normal too. Manjiri tells Abhimanyu that if he really wants to fulfill his Raksha Bandhan promises for Anisha then he will have to fix Anisha’s mistakes and explain to her how to handle relations, instead of supporting her in her wrong ways or works. Abhimanyu leaves to convince an angry Suhasini. Akshara keeps on thinking if she should talk to Anisha.

She thinks that she can’t stress Abhimanyu before his surgery. Akshara finds Anisha talking to someone on a video call and addressing the person on the other side of the call as “baby”. She gets shocked when Anisha says, “I love you” to the person she addressed as “baby”. Akshara gets shell-shocked hearing Anisha telling this person that she will meet him after getting married. She gets another shock knowing that Anisha is doing drama in front of both families on the mysterious person’s saying. Akshara gets badly shocked when the mysterious person tells Anisha that his wife won’t ever divorce him and this is the only way to be together as he won’t be able to marry her (Anisha) till he is married.

This mysterious person tells Anisha that no one will ever doubt them and they won’t have to even get separated if she will marry the guy chosen by her family. Akshara feels badly betrayed. Anisha tells the mysterious person that she loves him and is missing him. She promises the mysterious person that they will keep meeting each other even after marriage, without anyone’s knowledge. Akshara recalls Anisha always getting someone’s calls and meeting someone secretly. Neil, Parth, and Abhimanyu show Anisha that they have kept all her Rakhi’s safe till now. Anisha feels happy seeing this.

All three brothers of Anisha pamper her. Everyone feels happy seeing Anisha’s bond with her brothers. It is revealed that Parth and Abhimanyu made this song for Anisha when she was 2 years old and now it has become a tradition and they sing it at every Raksha Bandhan. Anisha apologizes to her brothers for not being present at the last few Raksha Bandhan. Abhimanyu expresses his brotherly love toward Anisha. Akshara feels angry and helpless seeing Abhimanyu’s immense love towards a deceiving Anisha. Parth reveals that Abhimanyu thought of no one in front of his sister (Anisha) during school time.

Abhimanyu promises Anisha that her brothers will always be with her in all problems of her life. Kairav brings Akshara forward. Kunal arrives at Birla house with Anand. He gives some gifts to Goenkas. Anand says he brought alone and reluctant Dr. Kunal to make him feel at home as well as comfortable. Abhimanyu tells And that he did good by bringing Dr. Kunal home. Abhimanyu promises Dr. Kunal that he won’t feel out of place at his home and family celebrations. He tells Dr. Kunal that he and Anisha made both families happy with their entry. Anisha thanks Dr. Kunal, for agreeing to perform Abhimanyu’s injured hand’s surgery.

Kairav says like Anisha loves her brother, he also loves his sister unconditionally. Anisha gets a call and leaves. Suspicious Akshara goes behind Anisha. She tells Anisha that she wants to talk to her anyhow, today itself. Anisha gets shocked after seeing a sudden change in Akshara’s behavior. Swarna interrupts Akshara and Anisha. She takes both Anisha and Akshara to dance. All brothers and sisters dance with each other. Akshara hugs Kairav in tension. Dr. Kunal misses some women named “Maaya” seeing Birla and Goenkas celebrating Rakshabandhan. Before tying Rakhi to Kairav, Akshara tells Kairav that he supported her at every step of her life but she never gave him anything till now.

She tells Kairav that today she is promising him that she won’t ever step back, whenever he will need her. Looking toward Anisha, Akshara promises Kairav that she won’t ever let anyone hurt him or do anything wrong with him. Everyone gets tense when Akshara starts crying. Kairav asks Akshara why she is getting too emotional. Akshay apologizes to Vansh and Kairav for not being with them at 3 Rakshabandhans. Dr. Kunal gets to witness everything. Kairav tells Akshara that now no one of them will ever leave each other or their families. Manish says that he prays to God to never let such a day arise. He says even if such a day arises, they will deal with it.

Swarna asks everyone to stop crying, as it is a festival day and thus they should celebrate happiness. All sisters tie Rakhi to their brothers and brothers give gifts to their sisters. Akshara thinks that she can’t give any stress to Abhimanyu at present. She also thinks that it’s also important to talk to Anisha.

In the next episode, Abhimanyu will tell everyone that Akshara cleared the 4th round of audition too. Later, Akshara will confront Anisha. She will angrily ask Anisha if she is having an affair with someone outside. Akshara will also ask Anisha if she wants to continue her affair even after marrying Kairav. Akshara and Anisha will be shocked to see Kairav behind them.

Reviewed Rating for Yeh Rishta Shock for Kairav 10th August 2022 Update: 3/5 This rating is solely based on the opinion of the writer. You may post your own take on the show in the comment section below.