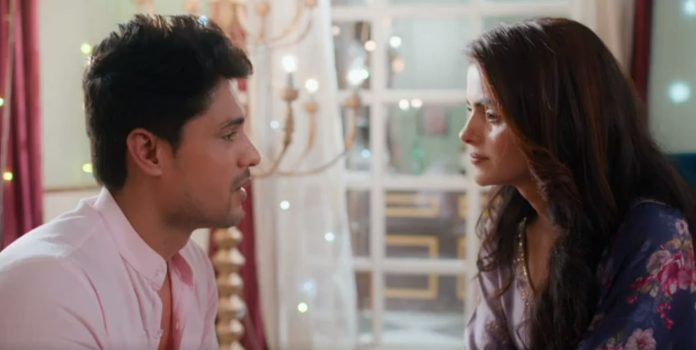 Udaariyaan 12th August 2022 Written Update Fateh reveals truth Fateh asks Tejo how Amanpreet always knows everything about Candy. Tejo tells Fateh that Amanpreet is a criminal-minded person. She says criminal-minded people keep information about everything which can fulfill their evil motives. Fateh goes and checks the party venue surroundings. He returns and tells Tejo that everything seems fine at present. Tejo gets Gurpreet’s call. She asks Gurpreet if everything is fine. Gurpreet tells Tejo that everything is fine. Suddenly, Jasmine screams in the happiness of victory while playing a game with Virks. Tejo and Fateh overhear this.

Gurpreet asks Tejo to take care of Candy as she will feel relaxed only when Candy will return home. Tejo tells Gurpreet that she and Fateh are taking care of everything and are trying to be careful according to the situation. She asks Gurpreet to take care of everything. Gurpreet disconnects the call, saying okay. Tejo recalls Jasmine telling her that she is jealous of her because she (Jasmine) is pregnant and she (Tejo) can’t ever become a mother. Flashback ends. Tejo feels upset and bad. Fateh notices Tejo’s sadness and asks her what is troubling her. Tejo tells Fateh that it’s nothing. She tells Fateh that she is just worried about Simran and Candy.

Fateh starts writing something on Tejo’s back. Tejo reads it. Tejo reads that Fateh is telling her that she is lying as she doesn’t know how to lie. Inside Candy’s friend’s birthday party, Candy’s friends are seen enjoying the magic show. Everyone inside and outside is unaware of the fact that the magician playing with kids is none other than Amanpreet. Simran and Buzzo are seen happily seeing Candy enjoying himself with his friends. After the birthday boy, Amanpreet calls Candy for magic. Using the advantage of the magic show, Amanpreet takes Candy away with him.

Fateh feels bad for Tejo. He thinks now it’s time to reveal Jasmine’s evil truth to Tejo. He asks Tejo why she is believing Jasmine even after knowing that she is evil and always plays games with them. Tejo feels a little shocked. Fateh asks Tejo to keep faith in him. He tells Tejo that she has gotten absolutely normal now. Fateh is about to tell Jasmine’s truth to Tejo but gets interrupted as Tejo sees someone running secretly. Tejo asks Fateh to see who was running from behind him. Fateh runs behind the man and grabs him by the collar. He asks the man why he was running.

The man pretends to be scared. He tells Fateh that he came to get some urgent catering things. Fateh lets the man go and returns to Tejo. He tells Tejo that the man was from catering services and came outside to get some catering stuff. The man who pretended to be catering staff turns out to be involved with Amanpreet in his evil plan. He calls Amanpreet and tells him that his way is clear now. Inside the party venue, everyone waits for the magician and Candy to come outside from the magic box/almirah. The birthday boy asks his mother why Candy and the magician didn’t return till now. The magician’s assistant tells everyone that the magician and Candy will soon return to the party venue.

She asks everyone to start a 5-second countdown. Everyone starts the countdown. When Candy and the magician don’t return/appear even after the countdown, Simran runs towards the magic almirah or box. She gets worried about seeing Candy missing inside from the magic box or almirah. Buzzo also runs towards the almirah and finds Candy missing. Tense Buzzo and Simran start screaming Candy’s name in tension. Outside, Fateh tells Tejo that Amanpreet can’t be seen nearby or inside the party venue. He also tells Tejo that Amanpreet is not among those people who can stay silent.

Tejo tells Fateh that even she is having an intuition that something wrong is going to happen. Fateh tells Tejo that everything seems to be fine till now and they even checked every person properly. Tejo recalls that they didn’t check the clown properly. She tells Fateh that they didn’t check the clown properly. Tejo also tells Fateh that the clown’s height and everything were almost equal to Amanpreet. Shocked and Tense Fateh and Tejo run inside realizing their carelessness. Inside the party venue, tense Simran tells Tejo and Fateh that the magician disappeared with Candy after showing magic. Tejo tells Simran that she and Fateh checked everyone, and no magician came inside. Tense Buzzo says the clown was the magician. Fateh tells Simran and Buzzo that Amanpreet was in a magician cum clown’s get-up. He says they initially failed to recognize Amanpreet in clown’s getup. This information tenses Simran and Buzzo. Tejo checks the magic box or almirah. They finally conclude that the clown was surely evil Amanpreet. Fateh and Tejo run behind Amanpreet asking Buzzo to take care of Simran.

Outside the party venue, Candy is seen sitting with Amanpreet. Even Candy fails to realize that Amanpreet is behind the clown cum magician’s get-up. Candy asks Amanpreet to return to the box, otherwise, everyone in the party venue will get scared. Amanpreet tells Candy that they will soon return to the party. He gives Candy a stuffed toy to Candy to play with. Amanpreet applies the clown’s nose. Amanpreet thinks cheaply, about troubling Tejo. Fateh reaches Amanpreet. Tejo takes Candy to Simran. Fateh is about to punch Amanpreet but the latter reminds the former about the FIR he launched against the whole Virk family.

Fateh stops and Amanpreet laughs seeing the former’s helplessness. Amanpreet gets shocked when Fateh suddenly starts laughing. Fateh starts slapping and punching Amanpreet. He tells Amanpreet that he didn’t punch him but the Joker. Fateh gives another 2-3 slaps or punches to Amanpreet. The police car’s siren starts ringing. Fateh tells Amanpreet that now the police will arrest him. Scared Amanpreet throws some dust on Fateh’s face. Fateh loses his grip on Amanpreet. Amanpreet uses the opportunity and runs away in his car. Buzzo and Simran run towards Candy and Tejo.

Police arrive outside the party venue. Tejo tells the inspector and his team that Candy’s kidnapper is running away. Buzzo, Tejo, the police team and Fateh run behind the clown’s car in their respective cars. The clown gets trapped. Fateh and Buzzo grab the clown. Fateh gets shocked seeing that the person behind the clown’s get-up changed. The present clown refuses to know any person named Amanpreet when Fateh asks him about it. Fateh tells the inspector that as soon as he came, Amanpreet took the same car (the car from which another clown got found) and ran away from the party venue.

Amanpreet starts pretending like a tense and worried father. He tells the inspector that Virks shouldn’t get Candy’s custody as his son isn’t safe with them. Tejo asks Amanpreet to stop his drama. She says Candy is 100% safe with Virks. Tejo tells the inspector that they were keeping a proper watch on Candy at the party. She says as soon as Candy disappeared, they immediately informed the police. Tejo says Candy has the biggest risk from Amanpreet. Before Fateh could accuse Amanpreet of kidnapping Candy in front of the inspector, Tejo secretly stops him. Fateh feels confused.

Tejo tells the inspector that Amanpreet always does something to trouble Virks. Inspector tells Tejo that they can’t take any action against anyone without proof. He apologizes to Amanpreet and leaves. As the inspector leaves, Amanpreet shows the clown’s paint still applied at the back of his neck to Tejo, Fateh, and Buzzo. Tejo stops Fateh from attacking Amanpreet. Fateh threatens Amanpreet, telling him that soon he will expose him in front of everyone. Amanpreet doesn’t get scared. He instead behaves cheaply with Tejo. This infuriates Fateh and he grabs Amanpreet’s collar.

Tejo stops Fateh and takes him away. Later, at Virk house, the family is seen trying to console a crying and worried Simran. Fateh asks Tejo why she stopped him from telling the inspector that it was actually Amanpreet who kidnapped Candy. Tejo tells Fateh that this way, the whole custody case of Candy would have gone in Amanpreet’s favor. She explains to Fateh that this way, Amanpreet would have proved to the police that Simran and Buzzo are not the right parents for Candy and can’t take care of a kid properly. Tejo says that Amanpreet wants them to make one mistake so that Candy’s custody goes to him. Buzzo angrily asks Tejo how Amanpreet can take Candy’s custody with his cheap tricks.

He says he won’t let this happen. Khushbeer says whatever it is but it’s a matter of concern. He tells Fateh that according to him they should get police protection for Simran and Candy. Tejo says they shouldn’t do this as according to her, even the police are involved with Amanpreet. Simran asks Tejo what they should do now. Tejo says that they need proof against Amanpreet to prove that he is a criminal. Jasmine comes and says that Tejo is absolutely right. She asks Simran to do as Tejo is saying as she can’t think anything wrong about her and Candy. Jasmine tells Simran that she can understand her pain as she is also going to become a mother.

Tejo gets upset hearing this and leaves with an excuse to prepare dinner. Fateh notices Tejo’s pain. He feels angry and decides to reveal Jasmine’s evil reality to Tejo. Later, in his and Tejo’s room, Fateh explains to Tejo that no one gets anything being selfless. Fateh asks Tejo to promise him that she won’t get angry and forgive him knowing that he hid such a big truth from her till now. He asks Tejo to believe that he never wanted to increase her troubles or pain, which is why he hid the truth from her till now. Fateh tells Tejo that now it’s important to tell her the truth.

In the next episode, Fateh will reveal to Tejo all the things that she suffered in the last 9 months. Angry Tejo will decide to fight evil Jasmine. She will tell Fateh that she won’t let Jasmine win this time. Later, she will enter Jasmine’s room and lock it from inside. She will scare Jasmine with a burning matchstick. Jasmine will get badly shocked and scared.

Reviewed Rating for Udaariyaan 12th August 2022 Written Update Fateh reveals truth: 3/5 This rating is solely based on the opinion of the writer. You may post your own take on the show in the comment section below.