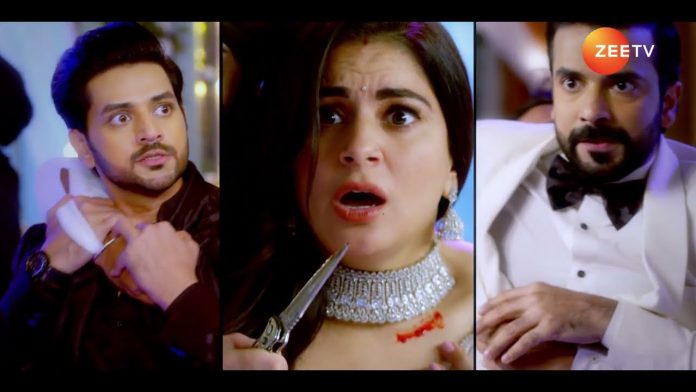 Kundali Bhagya 15th August 2022 Written Update Preeta’s love Karan and Preeta get into a funny banter. He tells that their families are present in the party, and even Anjali is there. He doesn’t know where is Anjali hiding in fear. He calls her Preeta Arora. She tells that she is Preeta Luthra. He shouts and calls her Preeta Karan Luthra. He asks her to say now, that her name isn’t correct. She tells that its correct, Preeta Karan Luthra used to be her name before. She gets glad to be called Karan’s wife. Her calm reaction shocks Karan. He gets emotional thinking Preeta wants to be addressed as Karan’s wife. Preeta’s love for Karan confuses him.

Earlier in the show, Raja tells that he has gone to fix a device, he is a professional, he has fixed the network jammer device. Prithvi calls him a fool. He tells that he will snatch everyone’s phone. Raja tells that the people can have hidden phones. Prithvi tells that he didn’t think of that. He receives a call. He sends Raja. Karan goes to the bar counter to get a drink. Anjali stops him from drinking. She asks him to stay as Arjun, not Karan. She doesn’t want him to have love for Preeta in his heart. Karan tells that he has always loved Preeta, but now there is no love. Anjali worries that he still loves Preeta. She asks him what does he want. He tells that she knows his motives well. He stares at Preeta. He thinks Preeta stays happy with Rishabh, if she liked him so much then why did she ruin his life.

Prithvi makes an entry in the party hall along with the dhol artists and dances. He gets everyone on the dance floor. Karan also gets pulled by the family members. He gets upset watching Preeta and Rishabh happily dancing and sharing a moment. He gets between and dances with Preeta. Preeta sees his Bhaangra moves and gets reminded of Karan’s dance. Arjun disturbs her again. Prithvi rolls on the floor dancing. Everyone applauds for his performance. He pays money to the dhol artists. Kareena praises him for the amazing dance that got everyone’s attention. He thanks her. He orders the waiter to shut the door.

She finds his behavior again resembling Karan. She asks him what is he doing in someone’s house, freeing roaming like he owns the house. She asks him how does he know about the dry fruit jar. He tries to leave, but she stops him to know his reply. They have a moment. She asks him to answer what she asked. Prithvi fulfills his craving by having the cake. He tells that he really likes to watch tensed faced. He asks the Luthras why are they looking shocked, if he has eaten some cake. He calls it unfair. He tells that they all had the cake, now its his turn and he will have the cake.

Rishabh doesn’t see Preeta, Kavya, Sona and Arjun around. He is relieved that they are safe. Sameer also looks for Shrishti. Mahesh tells that its good if she isn’t here, she is safe. Kareena wishes that they inform the police some way. Raja tells Prithvi that a girl is missing from the family. Prithvi realizes that Preeta isn’t there. Rishabh thinks of some way to save the family. Karan tells Preeta that he thought she is really smart, but he was wrong about her. He remembers her cheat and taunts her. Preeta shows him attitude. She calls him Mr. Suryavanshi and tells that she is comfortable with this name. He tells that he will answer her, he knows everything kept in the kitchen, he has come to the kitchen many times in a single day, he came here with Rakhi and Shrishti, he has a sharp memory and knows everything.

He asks her to let him eat the apple with peace. She tells that he is a guest, specially invited by Rishabh, he can have an apple today, but she will not behave good when they meet the next time. She leaves from the kitchen. He angrily keeps the apple and follows her to continue the argument. Kavya reaches them and tells about an unconscious man lying inside the room. Preeta asks who is he. Kavya tells that Mohan fainted down. Karan asks who is Mohan.

Preeta tells that Mohan assists Girish. He asks when did they hire Mohan. She tells that its their house, they can hire anyone. Kavya tells that Mohan is tied up. Preeta worries. She lies to Kavya about a game and sends her to the room. She tells Arjun that something is wrong. She goes to check. Karan accompanies her. Sherlyn tells her team mates that their secret is coming out, they should rob the jewellery and leave soon. Prithvi tells that Preeta is missing. Raja tells that he is talking about someone else, not just Preeta, Anjali and Arjun are also missing. Prithvi asks them to find them out.

Rishabh finds Preeta coming. Preeta looks down. She is shocked to see them at gun point. Rishabh wants to stop her from coming downstairs. Karan is also shocked to see the family held at gun point. He makes Preeta away and asks her is she mad to stand there in front of the goons. Prithvi sees Rishabh looking upstairs and asks Raja to go and check. Rishabh asks them not to go upstairs, just take whatever they want and leave the house. Prithvi asks if he appears a fool to him. Sameer calls them wrong doers. The goons misbehave with the family. Prithvi tells them that they are professionals, they have put a network jammer, now they can’t call the police. Karan hears this and checks his phone.

Reviewed Rating for Kundali Bhagya 15th August 2022 Written Update Huge brawl: 3/5 This rating is solely based on the opinion of the writer. You may post your own take on the show in the comment section below.