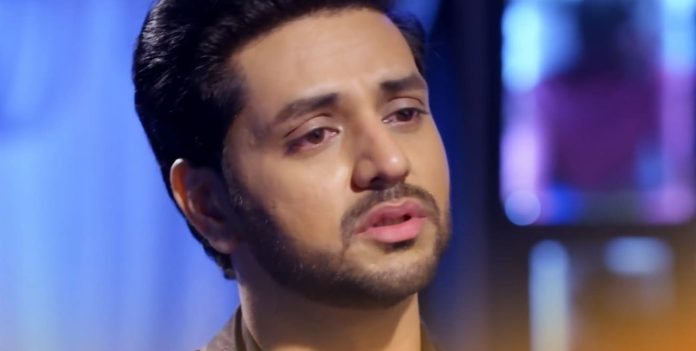 Kundali Bhagya 12th September 2022 Written Update Curious Arjun Rishabh asks Arjun what is he doing in this room, and what does he have in his hand. He sees Kavya’s birthday certificate and takes it from Arjun. Karan asks Rishabh what paper is that. Rishabh tells that its Kavya’s birth certificate. Prithvi keeps an eye on them. Preeta looks for Kavya, who gets inside a locker while playing hide and seek with Arjun. Preeta asks Rakhi about Kavya. She doesn’t find Kavya anywhere. Kavya shouts to reach Preeta and asks for help. Preeta turns around after reaching the locker room. Who will rescue Kavya? Keep reading.

Earlier in the show, Karan feels much disturbed recalling Kavya, who is just his photocopy. Kavya asks him if he saw her hiding. He tells that he didn’t see her. She calls him sweet. She tell that she will go and hide, he should find her. Karan hugs her. She goes to hide.

Anjali asks Arjun to listen to her. She finds him gone. She has to tell him about Prithvi. Karan reaches Preeta and Rishabh’s room again to find Kavya’s birth certificate. He wants to remember that he hates Preeta, he isn’t a blind lover, but a smart man who wants revenge. Preeta reaches her room. Karan hides from her. She thinks she has come for makeup touch-up. She struggles to tie the string of her blouse. She calls Shrishti to take help. Shrishti tells that she is away. Karan recalls their similar moment. Preeta doesn’t understand why tying the string is an impossible task. Karan reaches to help her. She gets angry seeing him. He draws her close and ties the string. She angrily slaps him. Karan wakes up from his dream.

Preeta gets troubled while fixing her dress. Karan thinks she doesn’t find anything, she should make glasses and wear it. Preeta’s heart seems to hear him. She tells that she felt like Karan is close and asking her to wear glasses to find things. She weeps in Karan’s memory. Karan wonders how did she hear his heart, why is she missing him, like she is affected by his absence. He thinks it’s a cheat, she is again fooling him. Prithvi apologizes to Kritika. He tells that he still loves Kritika and her innocence, he cheated her many times, but she is so sweet to always give him a new chance.

He wishes that Kritika was his present wife instead Sherlyn. He tells that he has to go and settle scores with Arjun, they shall meet again soon. He locks an unconscious Kritika inside the cupboard. Karan feels bad seeing Preeta cry. He wants to wipe her tears. He wishes to go and hug her. He dreams of pacifying her. He hears a sound and realizes Preeta left. She goes to the washroom. They both cry for each other, remembering their moments. Karan questions his heart, why he can’t see Preeta crying when he hates her so much. Prithvi enters the room and finds Arjun there. Karan reacts seeing him.

Prithvi acts since he is in disguise. He tells that nobody could identify him except two people. He hints about someone special, Kritika. He tells that he has come to talk to him. Karan asks him to get out of the room, its not his house, he shouldn’t be there. He threatens of calling the police. Prithvi asks him to go ahead and call the police. Karan tells that he isn’t joking. Prithvi tells that he will show him what he can do. He shows the video recording of Arjun and Raja’s conversation. Karan angrily breaks Prithvi’s phone. Prithvi asks Arjun not to underestimate him.

He tells that he has many copies that can prove Arjun as Rishabh’s enemy. Karan tells that he can steal the duplicate copies from Prithvi’s house. Prithvi throws his phone away and threatens him. He asks him to give him 15 lakhs, else he will tell everyone that Arjun tried to get Rishabh killed. Preeta hears some sound and comes out of the washroom to see. Karan refuses to give any money to Prithvi. Kavya waits for Arjun to come and find her. She thinks where to hide. She opens a cupboard and sits inside a locker. Preeta doesn’t see Arjun and Prithvi. They both conceal themselves.

Preeta goes to find Kavya. Prithvi wonders why did Arjun hide on seeing Preeta. Kavya tells that Arjun can’t find her at such an odd place. She finds the locker door shut. She panics and calls Preeta for help. Preeta gets a call from Rakhi’s phone. She runs to help. Karan worries for Rakhi. Prithvi asks him why is he worried for Rakhi. He demands the money. Karan asks him what will he do. He asks Prithvi to go and tell Rishabh, who would not believe him. Prithvi asks him to say the truth, who is he.

Reviewed Rating for Kundali Bhagya 12th September 2022 Written Update Curious Arjun: 4/5 This rating is solely based on the opinion of the writer. You may post your own take on the show in the comment section below.