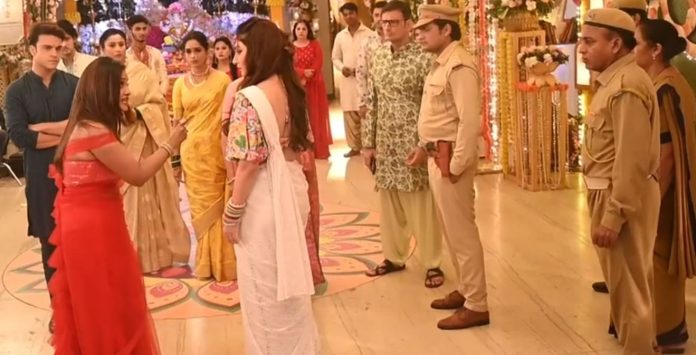 Kumkum Bhagya 14th September 2022 Written Update Rhea stuns Ranbir and Sid talk about Mihika. Aaliya and Rhea are trying to fool the entire family. They want to cover up their crime, that they tried to kidnap Mihika. They get caught by the police. They make an excuse in front of the family. They get confronted. They want to show the family that they were not kidnapping Mihika. Aaliya tells that she refused Rhea but the latter has forced her to do this. Rhea asks Aaliya not to blame her and act in front of everyone, when they both now what they have done. Aaliya asks her what is she doing then. Dida tells that she has seen Aaliya and Rhea in the hotel. She confronts them. Aaliya and Rhea make story loops. Ranbir feels bad that Prachi and Sid are getting married. He wants to go away from the arrangements.

Earlier in the show, Inspector asks about his mother, if that old lady was his mother, where is she right now. Vikram tells that Dida is attending the guests. He calls her. Inspector tells that its strange that the call isn’t connecting. Vikram tells that they will ask Pallavi. Ranbir and Sid lift Dida. Aaliya and Rhea reach Pallavi and find Dida in the room. Aaliya finds the goons hiding, and shows them to Rhea. She signs the goons to leave. She tries helping them out. Aaliya and Rhea blind the family members by holding the blanket, and make the goons run away. Rhea tries making stories. Sid knows her evil. Nobody finds Rhea’s behavior strange. Pallavi asks Ranbir to do something. Prachi asks Rhea what is she hiding behind the blanket.

Prachi asks Rhea is she hiding something behind the sheet. Aaliya asks how did Dida faint down. She asks the goons to run away before anyone else come. She hears Vikram coming. The goons hide in the room. Vikram gets the police. He asks Ranbir what happened to Dida. Ranbir tells that Dida was found lying unconscious. Inspector tells that his doubt was right. Ranbir asks what is he talking about. Dida gets conscious, shocking Rhea and Aaliya. Ranbir asks Dida what happened to her. Inspector asks Dida is she okay, who has tried to kidnap her. Vikram asks him to talk to Dida later, she isn’t well.

Rhea tells that she was scared for this, she was leaving but Aaliya stopped her. Ranbir shouts to stop Rhea. He asks her where is she running, is she hiding something. Vikram asks why didn’t they stop hearing them call, even Dida took their names. Aaliya and Rhea deny it. Aaliya tells that she didn’t hear Dida taking their name. Rhea tells that even she didn’t hear it. Inspector asks Rhea what revenge motive she has against Dida, did she hire someone to kidnap Dida. Rhea tells that they are one family. Aaliya asks Inspector not to get mistaken. Dida comes and tells that she knows the truth well, she has no misunderstanding, she knows that they both have kidnapped a girl, the goons saw her and got after her.

Aaliya and Rhea deny the blames. Sid understands that Dida has seen Mihika. Dida asks them to stop acting, they sent the goons to kidnap her, the goons fainted her. She asks Vikram to ask them about the girl, who was she, why did they kidnap her. Vikram asks Aaliya to answer. Aaliya tells that Rhea forced her to do this. Rhea tells that it was Aaliya’s plan, she is lying. Aaliya asks Rhea to confess that she did this. They both blame each other. The family is confused. Sid breaks his silence. He tells that they both did this, they both had kidnapped his sister Mihika. Aaliya ells that Mihika has come to Delhi. Rahul learns about the big family drama. His friend tells that Aaliya and Rhea are fighting.

Rahul tells that Aaliya and Rhea are really disgusting and can’t be loyal to anyone. He wants to rob the house for answering Aaliya. Aaliya tells that Mihika has come to Delhi, because of Rhea. Rhea tells that its not her mistake. She asks Dida to think, if she can really try to harm her. Aaliya asks why did she do this. She tells that Rhea wanted to bring happiness in the house, but the family doesn’t want that. She tells Pallavi that Rhea wanted to bring Mihika home, but she knew that Dida is upset with Mihika, Dida’s elder son cheated his wife and child, its true that Sid loves Mihika as own brother, Rhea wanted to reunite the family, she wanted Dida to accept Mihika.

Dida asks her to stop making stories and come to the point. Aryan comes and asks them what’s happening. Rhea tells that Aryan is her brother, she really misses him when he isn’t around. Aryan gets confused. She tells that he will always be her brother. He taunts her for always faking emotions. Rhea still covers up. She tells that siblings have fights but also love. She adds that she had saved Prachi after her accident, knowing she can lose Ranbir. She acts great. She tells that she had the same thought for Mihika. Dida asks Rhea to stop her sugary talks.

She tells that she has seen Aaliya and Rhea with the goons, Mihika was scared, they both were keeping Mihika captive. Mihika arrives there and tells them that Dida has seen the truth. Sid is surprised to see Mihika in the house. Strangely, Mihika defends Aaliya and Rhea. Rhea remembers finding Mihika and threatening her about Sid. Mihika lies to save Sid’s life. She tells that nobody kidnapped her, Rhea wanted to bring her back in the family. Sid realizes that Dida and Rhea have forced Mihika to lie. Rhea tells that everyone was busy handling Prachi’s problems, so she got Mihika home, she just worried for Mihika. She tells that they shall not punish Mihika for her dad’s mistake.

Dida asks them not to fool her. Aaliya tells that Dida saw something, but misunderstood it. Dida tells that she fainted down by getting hit on her head. Aaliya tells that it might be a heat stroke. Dida knows Aaliya is lying. She asks Mihika to tell the truth. Mihika sticks to her words. Dida tells that she is lying. Rhea asks why would Mihika lie. She asks Dida to please accept Mihika. She asks Rhea to unite with her family. Prachi tells Dida that Rhea is right, Mihika is part of their family. She also requests to accept Mihika and love her. Dida agrees to Prachi. She hugs Mihika. Rhea tells that this is family’s happiness. She adds that she will give a good news to Mihika. She happily announces that Sid and Prachi are getting married next week. Mihika gets delighted. She tells that she used to like it, when Sid used to praise Prachi so much. Ranbir turns upset.

Reviewed Rating for Kumkum Bhagya 14th September 2022 Written Update Rhea stuns: 2/5 This rating is solely based on the opinion of the writer. You may post your own take on the show in the comment section below.