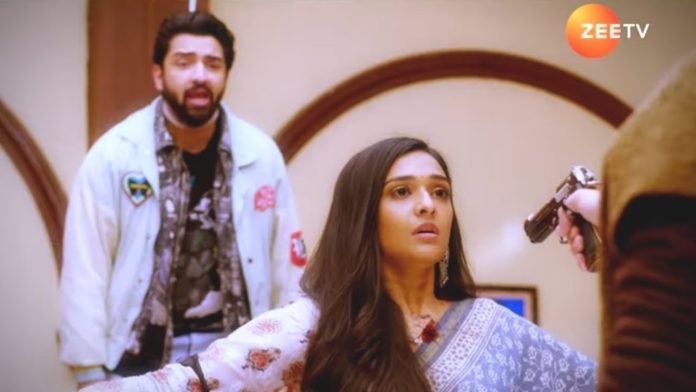 Bhagya Lakshmi 17th September 2022 Written Update Lakshmi shot Malishka tells the Oberois about the deal done by Neelam and Abhay. She wants Rishi to leave Lakshmi and come with her. She asks what will he do, if he will kill the terrorists. Rishi tells that he will fight them and also kill them if needed. Monish wants to kill Rishi and Lakshmi for his own mental peace. He catches Lakshmi, and summons Rishi to come and save her. Rishi tells that he won’t let anything happen to Lakshmi, he can give his life for her sake, and can also take someone’s life.

Monish announces that he will shoot Lakshmi if Rishi doesn’t come ahead. He counts to pressurize Rishi. Rishi rushes towards the courtroom, but Malishka hits on his head to stop him. Rishi faints down, while she wishes Monish kills Lakshmi soon before Rishi gets conscious. Rishi thinks of Lakshmi and awakens. He tells Malishka that he feels someone has hit on his head, and he thinks its her. He panics for Lakshmi and runs to surrender to Monish.

Oberois are called by the terrorists. Monish tells that if his demands aren’t fulfilled by the terrorists, then he will hang Rishi to death in front of his entire family, standing helpless. He tells that Lakshmi will get Rishi’s dead body. Lakshmi begs Monish to spare Rishi. He laughs at her. Monish shoots down Lakshmi, much to everyone’s shock. Rishi shouts Lakshmi. Will Lakshmi die, or succeed to prove her true love to those opposing her marriage with Rishi? The attackers’ track is going on since a while, and seems entertaining too. Keep reading.

Earlier in the show, Malishka gets the family members. Neelam and Abhay ask about Rishi, Kiran, Karishma and Sonia. Ayush asks about Lakshmi. Malishka tells that she will go and get others. Ayush tells that he will come along. She tells that she will get Rishi and Lakshmi, else he won’t move. Virender asks Neelam what is happening. Neelam tells that the goons will take them out of the court safely. She adds that it was Abhay’s idea. He asks her if she trusts them. She tells that they have no other option. Ayush tells Shalu that he is stressed that they are falling into a big trap.

Rishi looks for Lakshmi. He doesn’t find her. The goon asks Ayush to trust him and come with him. Abhay tells that Malishka would be coming with the family members. Virender thinks the goon is taking them to Monish. Ayush thinks of doing something. The goons really bring all of them to Monish. Neelam and Abhay ask them about the goon. The goon tells that they will die but not cheat their boss. Ayush tells that he knew this will happen. Shalu tells that they should have refused before. Karishma and Shalu ask Virender to rescue them. They complain about Rishi, who just cares for Lakshmi.

They tell that Rishi didn’t come to help. Neelam wonders where is Rishi. Goon tells that Neelam was trying to make a deal with them. Monish tells that they have loyalty first, nobody can cheat in the team. He asks the goon to catch others and bring them. Rishi doesn’t know how to find an exit way. He prays that his family stays safe. He learns that Lakshmi is in Monish’s clutches. The goon asks Rishi to come. Rishi doesn’t want to go there. Malishka wishes that Monish kills Lakshmi. She thinks of going back to Monish and try to strike a deal for her profit. ACP contacts Manish. He tells that the government is going to decide on his demands. Monish threatens him.

Malishka thinks to save Rishi somehow. She gets lucky when Rishi reaches there on his own. He asks about Lakshmi. She asks him to come with her. He tells that he will save Lakshmi by fighting the goons, he will do anything and even die for her sake. Malishka doesn’t want Rishi to fall in trouble. She hits on his head form behind. Rishi sees Malishka hiding behind the pillar. Monish gets Lakshmi in his clutches. He tells that he wants Rishi as well. He takes Lakshmi at gun point. He asks Rishi to just come. Malishka apologizes to Rishi for giving him pain. She tells that she has to save his life.

She wishes that they get rid of Lakshmi today. She hears Monish’s countdown and prays that Lakshmi dies. Virender begs for Lakshmi’s life. Monish tells that he will kill Virender as well, but he will first kill Rishi and Lakshmi. Dadi gets a bad dream of a family member’s loss. She screams in shock. Devika worries for Dadi. Malishka dreams of her marriage with Rishi. Rishi gets conscious. Malishka asks him if he is okay. He tells that someone has hit him just now, she might have seen it. She tells that she didn’t see anyone. She asks is he okay. He hears Monish telling about Lakshmi.

Malishka asks Rishi not to go. She tells that she will die without him. He tells that he can’t leave Lakshmi in danger. He pushes her. She gets hurt and acts of fainting down. He apologizes to her and runs to save Lakshmi. She tells that she knew it, he won’t stop. She prays that Rishi stays safe. Dadi cries for the family. Devika consoles her. ACP assures that he will rescue everyone safely. Lakshmi prays that Rishi doesn’t come to save her. She lectures Monish that he is heartless and doesn’t value love. Monish tells that he has a heart and also has feelings of love, but he wants to test Rishi and Lakshmi’s love.

Neelam also wanted Lakshmi to get away from Rishi’s life, but she doesn’t want Lakshmi to lose her life. Shalu and Bani beg Monish to leave Lakshmi. Rishi runs to save Lakshmi. He asks Monish not to do anything to Lakshmi and stay away. Monish tells that Rishi and Lakshmi’s love is true, they always want to save each other. Rishi asks him to spare Lakshmi. Monish slaps Rishi. He tells that its his wish to shoot Rishi first. Malishka wants to save Rishi. She collides with Balwinder again. He laughs at her. He holds her hand to stop her. She slaps him. He tells that he isn’t her lover, he has some respect in his locality, he just likes the good things, so he likes Lakshmi, he finds Lakshmi more beautiful than Malishka. He wishes that Rishi dies today. She raises hand again. He warns her. Dadi prays for Lakshmi and Rishi. Monish tells that he has to settle scores with Rishi. He begins to torture Rishi.

Reviewed Rating for Bhagya Lakshmi 17th September 2022 Written Update Lakshmi shot: 3/5 This rating is solely based on the opinion of the writer. You may post your own take on the show in the comment section below.