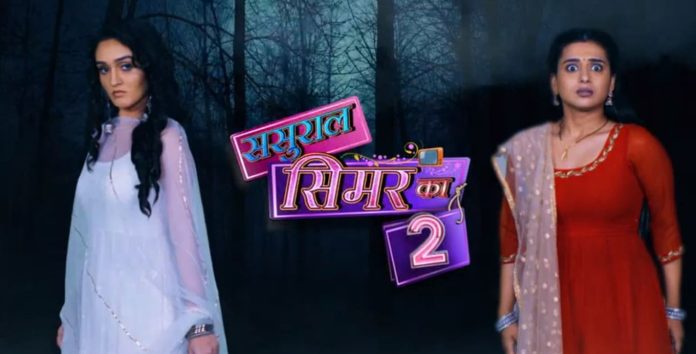 Sasural Simar Ka 21st September 2022 Update Simar versus Chaya Simar runs to stop Chaya from entering Reema’s room. She suddenly wakes up from sleep and realizes that it was just a nightmare. She feels Reema is in danger. She decides to find out who is Chaya and why is she after Reema. She goes to see Reema. She keeps an eye on Reema. She takes Reema in front of the water to see her reflection. Reema asks her what happened to her. Simar gets to see Chaya’s reflection in the water. She calls Simar as Chaya. Reema asks her what is she saying. Simar tells that she isn’t making any mistake in knowing her. She tells that Reema isn’t her sister, but Chaya. She asks Reema who is she. Reema tells that she is her sister.

Simar shouts on her, shocking the family. Vivaan tells Simar that Reema is their Reema. Badimaa asks Simar why is she calling Reema as Chaya. Aarav asks Simar to explain. Simar tells him that Reema is Chaya. She asks them to see the reflection in water. Nobody can see Chaya’s face in the water. Just Simar can see it. Sandhya asks Simar what is she saying. She tells that they can see Reema’s face in the water. Simar wonders why can’t they see what she can see. She struggles in explaining the family that Reema is Chaya, a spirit. Chitra makes fun of Simar’s wild imagination. Vivaan tells that Reema is a real person, not a spirit.

Chitra tells that Simar can say any rubbish thing. Aarav takes Simar aside to explain her. She asks him to believe her. He tells that he can see Reema’s face in the water. Simar insists him to see it again. Vivaan asks Simar why is she so stressed. He tells that she is the one who brought Reema home. She asks them to get Gangajal from Matarani. Chitra worries on hearing this. She asks Simar not to play with their minds. She asks Badimaa not to believe Simar. Badimaa tells that there is no blind belief, they can at least consume the Matarani prasad without any problem. Vivaan tells that they shall not encourage Simar’s illusion.

Badimaa tells that they shall clear Simar’s illusion for the house peace. She tells that this won’t insult anyone. Kavya offers the prasad to Reema. Chitra gets scared for Chaya. Reema steps back in fear. Simar asks Reema to take the prasad. Reema acts strange and throws the prasad away, leaving the family with a reason to suspect her. Badimaa asks Reema what is she doing, why did she throw the prasad, when she didn’t the puja in the morning. Reema tells that she is unwell, she can’t touch the prasad. She asks Simar why is she doing this intentionally to embarrass her.

Simar throws Gangajal at Reema’s face to bring out Chaya. Badimaa worries on hearing Reema’s scream. Vivaan asks Simar what did she do. Reema asks Simar not to humiliate her. Simar fails in proving anything. Chitra tells that Reema wanted to prove if there is a spirit in her or not. Simar isn’t convinced. Reema tells that she will eat the prasad if Simar wants. Badimaa stops Reema. She understands Simar’s stress. She feels Simar is in trauma. Chitra has changed the Gangajal and prasad. Vivaan asks Simar not to think much, they all are fine. Reema thanks Simar for supporting her. Simar tells Aarav that she knows Reema is Chaya. She doesn’t know how she will prove it. Chaya doesn’t want to leave the house after getting Vivaan and family’s love.

Reviewed Rating for Sasural Simar Ka 21st September 2022 Update Simar versus Chaya: 3/5 This rating is solely based on the opinion of the writer. You may post your own take on the show in the comment section below.