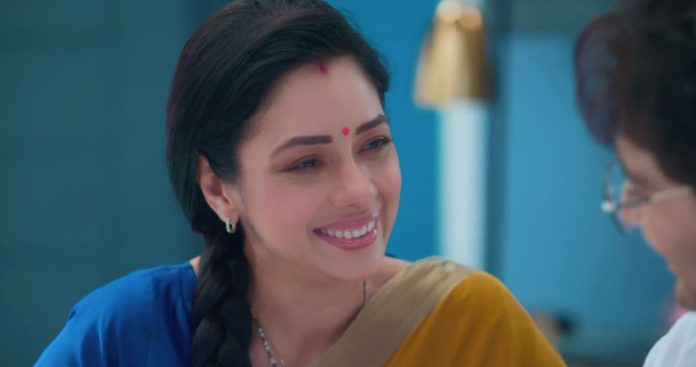 Anupama Big test 23rd September 2022 Upcoming Kinjal tells Rakhi that a woman isn’t modern by becoming dominating, but by fighting the society’s wrong. She wishes Rakhi had supported her. She isn’t hurt by Anupama’s truth, but by Rakhi’s lie. She feels that she would have been another Anupama if she didn’t know the truth. She asks Kavya to drop her to Anupama’s house. Leela tells that she will call Anupama home, Anupama has to come right away. Kinjal asks her if Anupama is her servant or employee. Leela tells that she is calling Anupama with rights of a mother. Kinjal asks Leela when did she last hug Anupama and give her love. Kavya tells that Leela doesn’t love Anupama, she just dominates her. Leela asks them not to lecture her. Samar tells Paritosh that Kinjal has gone to Anupama.

Paritosh blames Anupama for breaking Kinjal and his marriage. He worries that Anupama will ruin everything. Vanraj drops Kinjal to Anupama’s house. He asks Anupama to handle Kinjal and Pari. Anuj and Anupama give an assurance to Vanraj, that they will take care of Kinjal. Kinjal apologizes to come without informing Anupama. Anuj tells that its her mother’s house. Vanraj regrets that he isn’t able to live Pari’s childhood. Anuj asks Vanraj to come anytime to meet Pari. Paritosh tells that Kinjal is Anupama’s blind devotee. He speaks against Anupama. He can’t take Anupama’s greatness. Samar tells that Paritosh’s life got ruined because of his own deeds. He feels sorry seeing Paritosh’s wrong attitude. He asks him to make apology and amends.

Paritosh tells that he is really a bad person, so he got away from his family. Samar asks him didn’t he think of his family when he cheated Kinjal. Paritosh tells that he should die if everyone thinks he is so wrong. Vanraj and Kavya feel saddened when Pari gets away from them. They feel attached with the baby. She promises to take care of Pari once Vanraj gets her back home. She cries for Pari. Anupama comforts Kinjal. Kinjal rejects Paritosh’s call. Anuj tells Anupama that he loved this Anupama, who lives for her family. He always wants her to be the same. He glorifies Anupama. He wants her to stay complete with all the dreams and relations. Anupama asks him if he doesn’t think that she should just be of him.

He tells that they have family and relations with them. He shows his understanding. He asks Anupama not to worry for Kinjal. He gives her work to balance. They are sure to manage things together. Barkha taunts Kinjal over Paritosh’s cheat. She doesn’t make Kinjal’s stay a pleasant one. She advises Kinjal to divorce Paritosh. Kinjal gets troubled when Pari gets choked. She informs Anuj about Pari. Anuj stumbles. He gets hurt on his head after falling over the table edge. Anuj lies in pain, while little Anu worries for him. They summon Anupama home. Anupama gets stressed out while trying to balance her duties towards Anuj and Kinjal, when both of them need her entirely with them. How will Anupama pass this test? Keep reading.

Reviewed Rating for Anupama Big test 23rd September 2022 Upcoming: 3/5 This rating is solely based on the opinion of the writer. You may post your own take on the show in the comment section below.