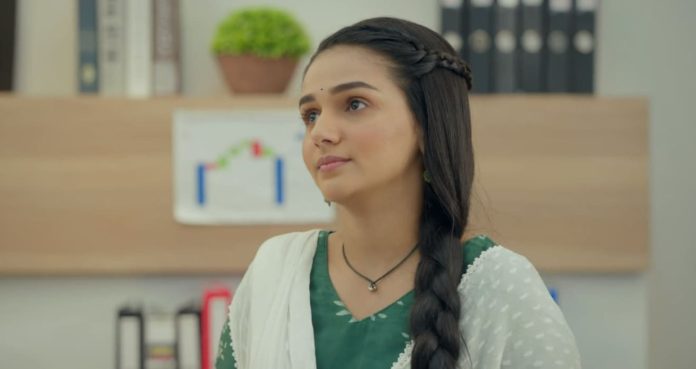 Na Umra Ki Seema 26th September 2022 Vidhi loves Dev Vidhi fails in a psychology test proposed by the groom. The guy tells Hariprasad that he wants to test Vidhi. Arjun watches Vidhi and the groom’s family discussion. The guy asks Vidhi to eat a banana. Vidhi eats it by obeying him. He tells that she has failed in the test, she ate the banana by peeling the entire banana, which means that she is a spendthrift. He tells that he won’t marry Vidhi. The prospective groom’s family calls off the wedding. Hariprasad is disgusted by the guy’s thinking. He tells that Vidhi got saved from such a mad family. Arjun supports Hariprasad and Vidhi.

He is proud Hariprasad stood by Vidhi. Arjun reveals about Vidhi’s alliance to the staff. They all share a laugh. Dev gets frustrated when he finds the staff laughing and gossiping on seeing the video. Vidhi apologizes to Dev. Dev asks her why didn’t she tell him that the guy’s family came to tell him. She tells that it was a personal matter, she wasn’t sure of telling him. He tells that she can tell him, her personal matter is also a professional related topic.

She tells that the alliance got cancelled. He feels a big relief, knowing Vidhi isn’t going to leave the job. Vidhi is also happy that the marriage got cancelled. Arjun tells Hariprasad that Dev came and caught him with the video. He doesn’t understand why Dev got so angry. Hariprasad tells that Dev has a high thinking. He asks Arjun and Vidhi to work well and keep his responsibility. Vidhi thinks of Dev and only Dev. She falls in love with Dev. Vidhi believes that age isn’t any bar in love. Vidhi wants to know if Dev also has feelings for her. She tests his feelings.