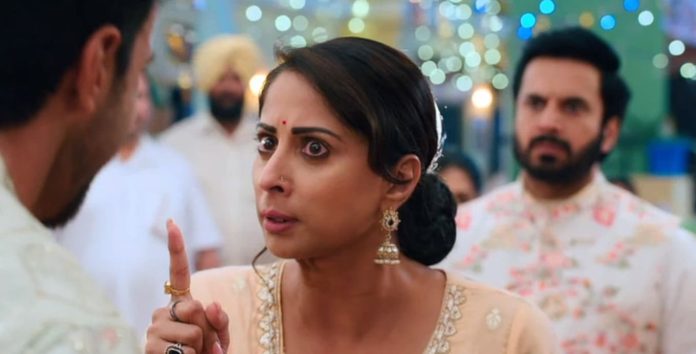 Swaran Ghar 10th October 2022 Written Update Swaran’s confession Swaran doesn’t tell anything to her sons, thinking of talking to Bebe first. Nakul wants to talk to her about Rajeshwari’s deal. Swaran and Bebe meet Aarav, and turn emotional. Bebe stops Swaran from talking to Nakul. They also have important matters to discuss. Swaran goes to talk to Shorvori. Nakul asks Neelu to just call Swaran by lying to her that he is into big trouble. Bebe wants to find out what Nakul is planning. Swaran assists Shorvori in the Raavan Dahan preparations. Shorvori asks her to share her feelings. Swaran doesn’t want to tell anything about Ajit. She gets hesitant.

Shorvori insists Swaran to tell her if anything is there to share. Nakul meets Bebe, assuming her to be Swaran. He reveals about Vikram mortgaging Swaran Ghar. He pleads to get some help from Swaran. Bebe reprimands him for mortgaged Kanwal’s last sign. He assures that he will save the house. Bebe doesn’t want Swaran to put her happiness at stake because of such bad children. Swaran shares her life’s developments with Shorvori. Ajit reaches there to meet Swaran. Bebe tells Nakul that Swaran tolerated such bad children, she is really brave. Swaran stands close to the mic and confesses her feelings for Ajit, in front of Shorvori.

Swaran gets audible to the people. Swaran and Ajit’s love story gets known to the people. Swaran tells Shorvori that she has realized her love for Ajit, but she never imagined herself with someone else. She admits that she also wants to live her life with Ajit. Ajit is happy to hear this, and also worried that the people are learning about them in a wrong way. Shorvori tells Swaran that she is really happy. Nakul turns angered hearing this. He asks Bebe what’s going on. Bebe is really proud that Swaran chose Ajit than Arjun.

Swaran tells Shorvori that she got her love and happiness back in the form of Ajit. Nakul rushes to Swaran and stops her. He tells her that the world has overheard her love story. He throws his anger around and shows his disapproval over their love story. Swaran faces the people. Shorvori asks her not to feel scared and just walk ahead. The people criticize Swaran. Ajit and Bebe also stand watching Swaran’s insult. Vikram joins the wagon and insults Swaran and Ajit for cheating them. Bebe finally takes a stand for Swaran. She tells that Swaran isn’t wrong.

Vikram asks them did they lose the family values, and forget Swaran’s age, will she marry in this age when she has grandchildren. Nakul tells Vikram that they can talk at home. He stops Vikram from creating a drama. Vikram doesn’t budge. Shorvori tells that the mic was on, and Swaran’s voice got overheard by mistake. Vikram tells that Swaran and Ajit are ready to commit a new sin. Ajit breaks his silence. Vikram reprimands him for cheating Kanwal’s faith. Ajit loses his cool. Swaran stops Vikram and Ajit’s fight. She leaves Vikram with a warning.

Reviewed Rating for Swaran Ghar 10th October 2022 Written Update Swaran’s confession: 4/5 This rating is solely based on the opinion of the writer. You may post your own take on the show in the comment section below.