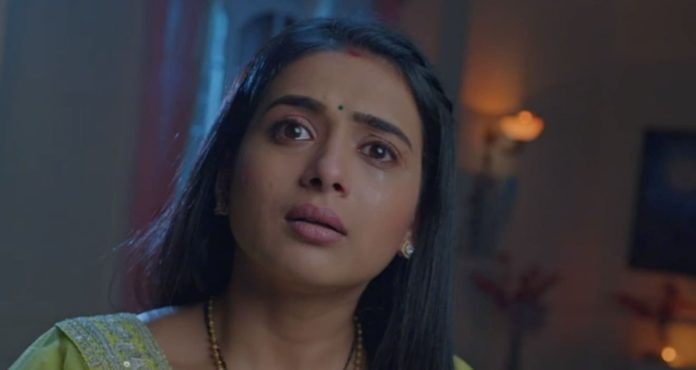 Sasural Simar Ka 13th October 2022 Written Update Simar compels Chaya Kamakshi enters Oberoi mansion in disguise and reaches close to Simar. She tells that she has to stay in Oswal mansion. Simar doubts her. Kamakshi pleads with Badimaa and gets a shelter. She thanks Badimaa for giving her a job. Kamakshi steps inside the house and laughs. Rudra wants the locket at any price. Kamakshi tells that she will get the locket when she has entered the Oswal mansion. Chaya also tries to get the locket from Aditi. She tells Vivaan that she will not give the locket even to the baby, Geet. Simar tells that Geet will be given the priority today. The locket gets gifted to Geet. Simar finds Reema worried.

She asks Simar to accept her. She makes an emotional appeal to Simar. Simar feels helpless. She tells that Chaya can never take Reema’s place. She pities Chaya. She tells that she just loves Reema. She sprinkles Gangajal on Chaya and asks her to leave Reema’s body. Chaya tells that if she doesn’t get Vivaan, then even Reema won’t get it, she wants Reema’s body now and Reema has to die now. Simar asks her what does she mean to say. Chaya threatens of killing Reema. Simar is in shock.

Reviewed Rating for Sasural Simar Ka 13th October 2022 Written Update Simar compels Chaya: 3/5 This rating is solely based on the opinion of the writer. You may post your own take on the show in the comment section below.