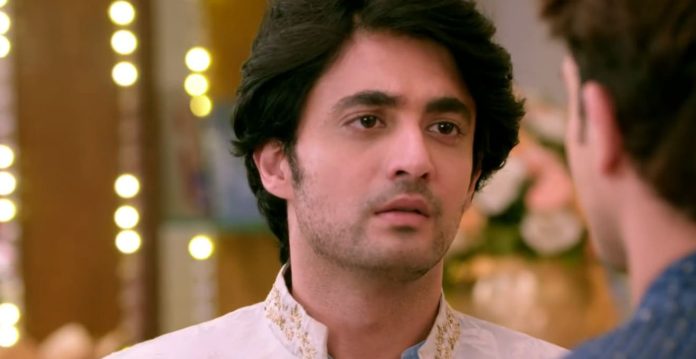 Kumkum Bhagya 4th November 2022 Written Update Sid goes missing Prachi and Ranbir looks at each other, as Dida feels that their love is strengthening. She laughs to tease them. Ranbir tells that he is going with Rhea to get the DNA test done. Dida suggests Prachi to go with them as Rhea can do anything and get the reports changed. Prachi goes. Pallavi sees Vikram shouting at the employee on his call and asks him. Vikram tells that he is upset with her. He asks her to think of the day, which they spent without any fights. He tells that he feels that animals stay here, and not humans, who fights with each other for some reasons. He blames Pallavi for all the problems at home. Pallavi asks him to talk directly. Vikram asks her to hear him out, and clears that Prachi is daughter in law of the house, and infact she is daughter of the house. He says he couldn’t forget whatever she told to Prachi and felt really bad. He makes it clear that she shall not humiliate Prachi again. Aaliya hears their argument and tells Pallavi that Prachi has provoked Vikram against you, by playing victim card. Pallavi decides to oust Prachi very soon from home, and blames her for her spoilt relation with Vikram.

Ranbir is waiting for Rhea. Prachi comes running and argues with him. He says he will lock her in the room. Prachi asks him not to lock her. She tells that they shall go for Rhea’s test. Rhea shouts asking if she don’t trust Ranbir. Ranbir makes an excuse that Prachi is going for routine test. He says lets go. Prachi and Rhea run to sit on the front seat with Ranbir. Ranbir is startled. Prachi suggests Rhea to sit on the back seat. Ranbir drives off the car.

They reach the hospital and comes to know that Dr. Madhurima is not available, but other doctor is available. Rhea insists that she wants just Dr. Madhurima. Receptionist calls Dr. Preeti. Dr. Preeti and Prachi know each other and meet each other happily. Prachi introduces Preeti as Sarita’s neighbor, while Ranbir introduces himself as Prachi’s husband. Rhea goes with Preeti to get the test done. Prachi gets surprised when Ranbir tells that he can tell the world that he is her husband.

Pallavi cries and vents out her pain infront of Aaliya. Aaliya asks her not to take the things personally as husband and wife’s fights happen. Pallavi blames Prachi. Aaliya thinks she is not interested in Vikram and her fights, and thinks Pallavi shall get Sid-Prachi marriage done fast. She provokes Pallavi against Prachi and asks her to get her married fast, so that she don’t influence Vikram against her. Dida informs Pallavi that Sid is kidnapped, seeing her messed up room.

Dr. Preeti questions Rhea about her pregnancy and is about to check the previous (fake) reports. Rhea thinks she will be caught. Ranbir and Prachi are waiting outside Dr. Preeti’s cabin and they have a moment. Prachi says she might question him when truth comes out, and asks if he will answer like normal people or will question me. Ranbir says you will get the answers which you will like a lot. Rhea makes glass of water falls on Dr. Preeti’s table. Dr. Preeti goes out to throw the box and informs Ranbir that she will get the test done. Prachi thinks truth will be exposed. Pallavi gets worried seeing Sid missing.

Aaliya thinks she shall get him searched as tomorrow is marriage. Vikram comes there and sees the room messed up. Aaliya calls Rhea. Rhea tells that she is in a big problem, Dr. Madhurima didn’t reach here and Ranbir and Prachi are sitting outside. She says she is in complete mess. Aaliya asks her to convince Ranbir that she will not get the test done by other doctor. Rhea asks Aaliya to call Dr. Madhurima and ask when is she coming. Aaliya is about to tell her about Sid. Rhea ends the call seeing Dr. Preeti coming back.

Earlier in the show, Rhea tells Aaliya that Madhurima is not picking her call. She calls her again on Aaliya’s sayings. Madhurima picks the call. Rhea shares her plan about coming to hospital to get her fake baby’s fake DNA test done for the fake report. Dr. Madhurima asks for the big sum of money. Rhea says her work shall be done and assures to give her money. She gets tensed seeing Pallavi standing. Aaliya asks Rhea to tell her. Pallavi asks Rhea being concerned for her. Aaliya tells that since Prachi accused that the baby is not of Ranbir, Rhea is feeling anxious and restless and this feeling is not good in pregnancy. She tells that you asked something and Rhea is replying something else, this all happening due to the humiliation she has faced. She says until the report comes, Rhea will be anxious and stressed. Pallavi feels sympathetic and hugs Rhea. She decides to get the test done today itself to save her anxiousness. Once Pallavi goes to talk to Ranbir, Rhea scolds Aaliya for her words to get Pallavi’s sympathy, due to which the latter is hurrying up with the DNA matter. Pallavi returns to take Rhea with her.

Prachi thinks Rhea’s hatred for her is increasing day by day. She thinks Sid’s fear is not wrong either. Dida happily hugs Prachi for her idea of Rhea’s DNA test. She tells that once it is clear whose father is whom, Ranbir will stay with you. She tells that just as Ranbir knows the truth that he is not Rhea’s baby father, he will stop her marriage with Sid. She tells the happenings are for good and that their love is strengthening with each passing day. Prachi sees Ranbir hearing them and smiles.

Reviewed Rating for Kumkum Bhagya 4th November 2022 Written Update: 3/5 This rating is solely based on the opinion of the writer. You may post your own take on the show in the comment section