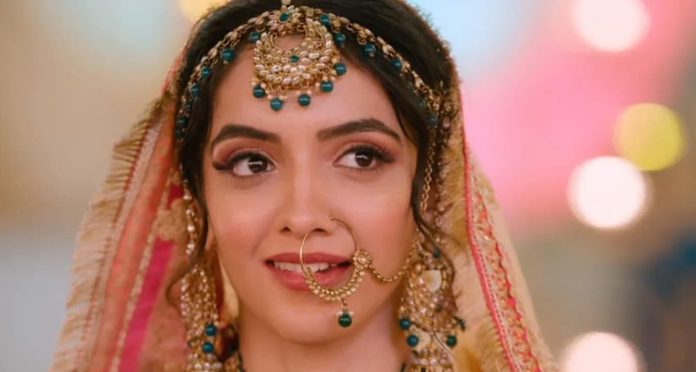 Udaariyaan 7th December 2022 Written Update Naaz attacks Nehmat breaks the news to Renuka that Mallika is missing, she left for some urgent work. Renuka suspects her. Nehmat tells that she will get Mallika back. Renuka goes to welcome the baraat. She asks Nehmat to call Ekam and find out Mallika. Ekam speaks to Renuka and asks her to just do as Nehmat tells her. He asks her not to worry, he will get Mallika back in time. Renuka doesn’t understand why Nehmat has worn Mallika’s bridal attire. Ekam tries to track Mallika’s phone. Shelly asks Nehmat why is she wearing Mallika’s bridal dress. Nehmat tells that Mallika had gone for some important work. Jasmin doesn’t understand what is Mallika planning.

Shelly tells that maybe it’s a plan. Jasmin tells that if Mallika runs away, then Shelly will sit in the mandap. Jasmin asks her to keep an eye on Mallika. Shamsher waits for Ekam. Rupy tells that Ekam might have some important work. Naaz gets happy seeing the tension around. Ekam learns Mallika’s location. He grows worried by the shocking piece of information. Advait sees Nehmat and asks her about Mallika. Nehmat makes an excuse and goes away. Rupy finds Nehmat crying. He asks her the reason. Renuka accuses Nehmat for disappearing Mallika. She asks about Ekam and Mallika. Nehmat tells Rupy that Mallika left the wedding and Ekam went to find her.

Renuka gets panicking. Shelly scares her more. She also accuses Nehmat. Rupy asks Shelly to stop nonsense. Renuka tells that Nehmat is the reason that her family broke, Jayveer died and now Mallika’s life got ruined. Nehmat tells that she didn’t do anything. Renuka vents out her anger on Nehmat and hurts her. Rupy and Satti protect Nehmat. Jasmin is troubled that her plan of switching the brides would fail if Mallika doesn’t come back. Nikhil meets Naaz and surprises her. Jasmin and Shelly see Nikhil and Naaz together.

Shelly tells that Naaz would be behind Mallika’s disappearance. Jasmin asks if Naaz knows about Mallika. Shelly tells that Naaz isn’t tensed about the situation, Naaz is spoiling Jasmin’s plan. Jasmin wants Naaz to sit with Advait in the mandap. She asks Shelly to delay the marriage till Mallika comes back. Nehmat attempts to connect to Ekam. Satti and Renuka get into an argument. Rupy asks them to calm down, and hide the matter from Kapoor family. Nehmat tells that she will go and find Mallika. Renuka suspects Nehmat’s intentions.

Reviewed Rating for Udaariyaan 7th December 2022 Written Update Naaz attacks: 4/5 This rating is solely based on the opinion of the writer. You may post your own take on the show in the comment section.