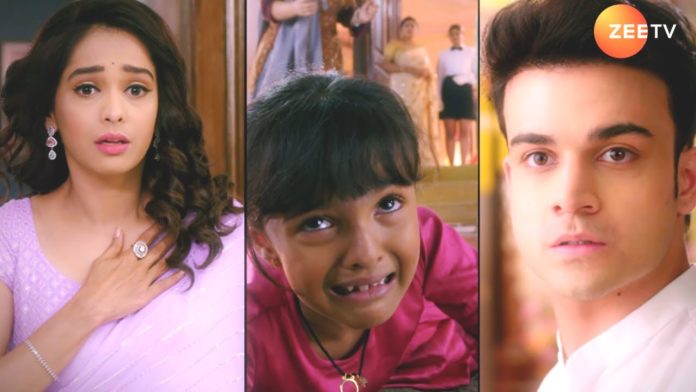 Kumkum Bhagya Khushi entry promo 23rd January 2023 It’s a new beginning for Khushi. She is grown on the streets. She attends the Kanjak puja. She goes to a rich household, and sits with the other girls. The lady tells that Khushi won’t sit there, Kanjak is a Devi’s avatar, but they have no idea about Khushi’s father and mother. The lady throws Khushi out of the house. Khushi falls on the road and cries in pain. She doesn’t have any support. She is away from her parents, Ranbir and Prachi. Khushi is their daughter Panchi. Prachi feels uneasy when Khushi gets hurt. What’s written in Khushi’s fate? Keep reading.

Gautam and Dhara get emotional while welcoming the family home. Dhara succeeds in bringing the family back. Dev, Rishita, Shiva, Raavi and Krish return home. Shiva doesn’t remember the past. He hugs his brothers. Gautam emotionally cries. Chiku tells that he is very happy to meet all of them. He is glad that his family completed. Rishita is still blaming Dhara that she lost Chutki. Krish doesn’t regard the family close to his heart. He wants to spend time with Suman and then go back to Canada.

Rishita and Raavi get rude while entering the house. Gautam defends Chiku. He asks Rishita to not ill-treat his son, he will not tolerate it. Dev asks Rishita not to vent her frustration on Chiku. Rishita hates Chiku, who is the reason for all the mess. She asks Krish if he has become a rich man now. Shiva tells that he wants to compliment Krish. She feels jealous of Krish. The family isn’t able to forget their past. They meet Suman. They decide to leave. Gautam and Dhara decide to get the Pandya family back again.

Reviewed Rating for Kumkum Bhagya Khushi entry promo 23rd January 2023: 4/5 This rating is solely based on the opinion of the writer. You may post your own take on the show in the comment section.