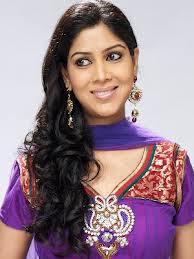 Sakshi Tanwar is an Indian television and Bollywood actress. She is the most sought bahu and one of the leading ladies of Indian television. She started her career as an anchor for Door Dashan’s song-based program Albela Sur Mela. She came into limelight with her portrayal as Parvati Agarwal in TV series Kahaani Ghar Ghar Kii and recent tele series Bade Achhe Lagte Hain as Priya Kaoor. She won many awards for these 2 characters.

Sakshi was born on 12 January 1973 in Alwar, Rajasthan to CBI officer Rajendra Singh Tanwar. Due to his father’s transfers, she studied in many Kendriya Vidyalayas (Central School) and graduated from Lady Shri Ram college in New Delhi. She believes in late marriages just her Bade Ache Lagte Hain character Priya who married in late 30s. She is not yet married.