Karan welcomes the extremely affable and magnetic Abhishek Bachchan. Abhishek says what a nice set Karan, very tasteful. They get seated and start the witty conversation.
Karan: How does it feel to be back, you are here for the fifth time?
Abhishek: I’m a returned guest. Its wonderful.
Karan: Dhoom was a huge blockbuster and Bol Bachchan did well, you were exceptionally good in it. What’s your take on it?
Abhishek: Wow, its like Déjà vu. It teaches you a lot. It keeps you alert. You can never judge what the audience wants. Bol Bachchan did well, it fills you with great enthusiasm. Dhoom is about Uday Chopra and Abhishek Bachchan. It was great to work with Aamir. 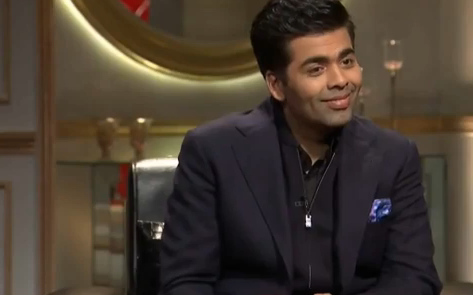 Karan: Its not an easy place to be like Amitabh Bachchan’s son. Did you had that moment of I don’t want to hear it anymore.
Abhishek: It was not the choice I made, I am blessed. I would never be able to repay that debt. You know the pressure that star sons go through. Yes, I do agree that we get our first job easier than others, but you can’t compare it. I never took it granted, I have never used my father’s name. He never launched me, huge pride in saying that. He says don’t expect anything from me, but today when I see my films, I am happy. He allowed me to do what I wanted as a protective father.
Karan: But you have mastered the art, what is the level of insecurity marrying to the world’s most beautiful woman?
Abhishek: Nothing, I believe she is the most beautiful woman on this earth. The reason why we got together was she was very down to earth. She is my best friend and that’s the reason I love her so much.
Karan: My next guest tonight is considered one of the most strongest fashionistas, welcome the director of the blockbusters Farah Khan.
Farah: I am back. (She makes a dancing entry with Abhishek and Karan!!)
Karan: Abhishek, do you find her sexy?
Abhishek: She is superb.
Karan: Farah has an exceptionally bright past.
Farah: Lets have five minute silence on the show.
Karan: For your sex life?
Abhishek: Everybody watching this show please stand up. Pray that Karan’s physical life exists.
Karan laughs. Karan: Allow me to speak now. Farah talks about Abhishek and how he behaves on the sets. Abhishek clarifies that he is not a prankster. Farah says never leave your phone next to him as he messages everyone like what are you doing tonight, come and meet. 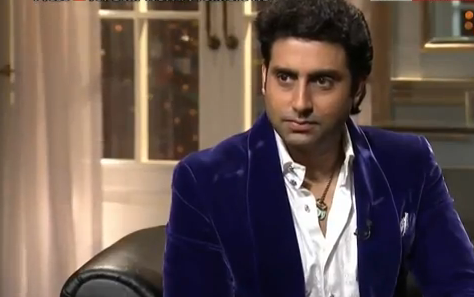 Abhishek: I am not a prankster, I m enthusiast.
Karan: Farah, Why don’t you tell everyone that you came on me one night.
Farah: I had a ghost in my room so it happened. I knew the one room where I will be safe in, that was yours Karan.
Karan: Farah, you went on record to tell about the surgery you did.
Farah: Yes, I did. Tummy tuck. I went on a diet and worked a lot to lose weight.
Karan: What prompted you?
Farah: I saw myself in Shireen Farhad Ki To Nikal Padi and that was a reality check.
Abhishek: So many people in the film fraternity have done this.
Karan: Have you made it peaceful with Akshay?
Farah: No, I did not. If he meets me at a party and says hello, I will reply, but there won’t be anything more. Is he coming here on this show now?
Karan: No. You had a problem with Shahrukh too but now its sorted.
Farah: Maybe if I talk with him, it can be sort out.

Karan: How vain men have become?
Farah: Does a vain man look good?
Abhishek: I am against waxing the chest, I will die if my dad asks me to wax my chest. My mum says never trust a man without chest hair.
Kara: Really?
Abhishek: Ya.

Karan starts the rapid fire round with Farah Khan.
Karan: If you were playing a truth or dare with the following, what would you ask them to do?
Sanjay Leela Bhansali? Farah: I would dare him to do a love scene with you.
Shahrukh Khan? Farah: I would dare him to come on 9am shift.
Karan: For whom will you put the following signs outside your door? Welcome?
Farah: For everybody, everyone are welcome to my home.
No entry? Farah: For nobody.
Silence please? It will be you as you make the maximum noise at my home.
Proceed with Caution? Tell Shiresh. 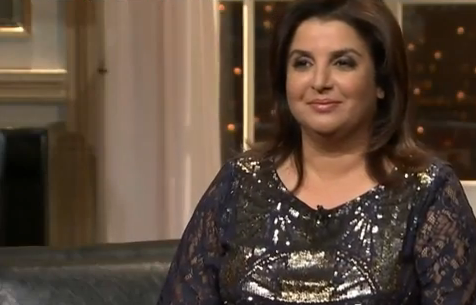 Karan: A rumor who want to spread about yourself.
Farah: Just spread.
Karan: A matrimonial ad for yourself?
Farah: It would say a wholesome housewife with three beautiful babies free.
Karan: Hot or Not? Shahid Kapoor? Farah: Hot
Akshay Kumar? Farah: Hot
Himesh? Farah: Very hot
Ranbir Kapoor? Farah: Hot
Shiresh Kundar? Farah: Hottest
Shiney Ahuja? Farah: No comments, I can’t lie.
Karan: An overrated movie?
Farah: Lootera
Karan: An idea that changed your life?
Farah: That I should get married and have children.

Karan turns to Abhishek for the rapid fire round.
Karan: Whom you would cast as the lead actors in the films based on the following titles?
Friends with benefits? Deepika and Ranbir
Karan: A product you will be embarrassed to endorse?
Abhishek: A condom brand.
Farah: That’s the brand that needs to be endorsed the most.
Karan: If you were to introduce the following in one line, what would it be?
Amitabh Bachchan? Abhishek: There was, there is, there will always be.
Aishwarya Rai? Abhishek: She is definitely worth it.
Katrina Kaif? Abhishek: One of the hardest working actors I have come across.
Karan: How would you react if a male co star hit on you?
Abhishek: I will introduce him to John Abraham.
Karan: How would you react if an actress makes a pass on you?
Abhishek: I will be very excited.
Karan: What do you want to say to the following?
People who say you are unfit? Abhishek: Get a life.
People who compare you to your father? Abhishek: Thank you very much. It’s a great honor. (Abhishek sits on Karan’s lap and Karan asks him to go back as the questions are not over yet!!)
Karan: Who in Bollywood will win this title?
The biggest flirt? Abhishek: John and Ranbir

The rapid fire ends. Karan announces the winner while Farah prays to win. Karan says Abhishek is the winner though Farah played fair. Next, they play the Coffee quiz which is the Bollywood trivia GK quiz. Abhishek wins it too. Uday Chopra, Ritesh Deshmukh, Farhan Akhtar speak about Abhishek. Farah’s kids give a message to Farah. The Episode ends with Farah and Abhishek signing the coffee mugs.