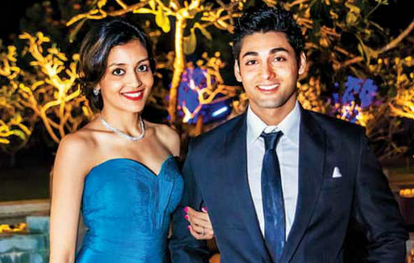 Handsome lad Ruslaan Mumtaz got married to his beloved girlfriend Nirali Mehta after 9 years of commitment on the Valentine’s Day 14 Feb. He married her in court and will later marry in a traditional wedding on 2nd March 2014. He shot to fame as Dhruv/DV with Sony TV show Jee Le Zara. He is the son of yesteryear’s actress Anjana Mumtaz. Interestingly, He got married on the show Jee Le Zara last week. He tweeted ” So I’m going to go straight from my shoot to my wedding. Used to here about this happening, now I’m experiencing it. Welcome to TV Dude”. In another tweet, he wrote “Finally packed up and going in my jeelezara costume for my shaadi. Have to make it at 11. Going to be late for my own shaadi man”. Wishing him best of happiness.