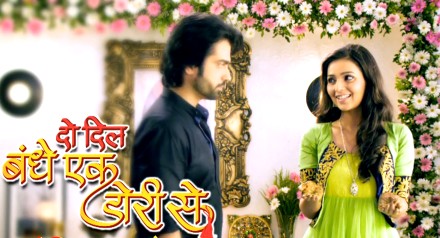 Raghu participated in a shocking dangerous stunt ” Maut Ka Khel’ where in he put himself on fire and jumped in the swimming pool. Raghu takes part in the stunt to earned money for Govindji’s son operation. When Shivani comes to know about Raghu risking his life for Govindji’s son, she rushes to the Mela/Fair to stop Raghu. She blames herself as she refused to give money to Govindji. She thinks if anything happens to Raghu then she will die with shame. She calls Bella and informs her about Raghu going to do the fire act. Bella tries to stop Raghu but Raghu assures her that nothing can happen to him. Raghu tells her that he is helpless and he has to do the stunt anyhow as he took the money in advance. Bella feels miserable for her brother.

Shivani comes inside the Mela and is shocked to see Raghu on fire as he jumped in the swimming pool. Raghu’s family also witness the stunt and are shocked. Raghu gets unconscious while in the water, divers dive in and take him out. Shivani urges Raghu to open his eyes. She cries badly. Raghu is lying unconscious and wounded. She rushes him to the hospital. She holds herself guilty for Raghu’s condition. In the upcoming episodes, we will see Shivani taking care of Raghu. She will realize her hidden feelings for Raghu. Will she comes to know about Jazz, Mahima and Aunty’s manipulative minds? Stay tuned to watch some romantic moments between Raghu an Shivani.