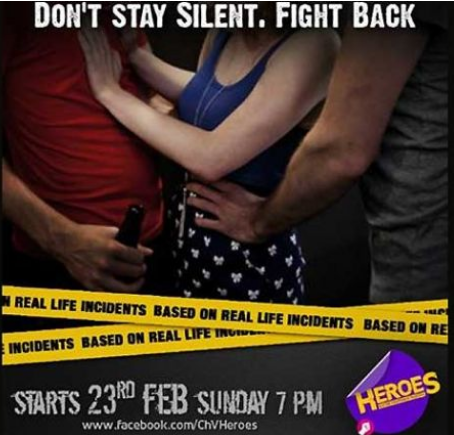 In India, 7/10 girls face sexual harassment and only they can tell what type of wound it does on their hearts and minds. Why don’t they come out and speak up, why do they keep quiet. They have to break their silence and bring out their voice. Heroes will be showing the stories of brave girls who fought against Sexual harassment. The real identities are not shown and the show is an enacted version showing real incidents and stories of girls who have spoken in the world against women abuse and fought for their rights.

Ankita shares a 5 yr old incident that happened with her. She used to stay in a small place Palampur. It was her cousin Tanya’s marriage and she was excited to go to Mumbai for attending the marriage. She reaches the Mumbai station and finds her aunt and uncle. She was relieved seeing them. They introduce her to their son Yash and his best friend Nandu. She greets them. She was happy to see Mumbai and found the girls high in fashion and modern. She was not at all confident. Yash sits by her side and she feels odd as she has never sat beside a guy before. She comes home and meets Tanya. Her other cousin Sangeeta asks her to share her room.

Few girls made fun of her seeing her wearing salwar suits. Sangeeta brings her to her room and shows her the room saying this is going to be our room for next couple of days. Sangeeta asks Ankita to get ready as they are going for shopping. Ankita says I won’t come, as I m new here, I m feeling strange seeing how modern you all are. Sangeeta says don’t be silly, we don’t judge people by appearance, get ready. Ankita agrees and goes with them.

Sangeeta asks Ankita to try some western outfits. Her uncle asks Sangeeta to go and he will help Ankita in selecting the right dress. Sangeeta says Mamu’s choice is really great, so be with him. Ankita tries some dresses. The way her uncle contacts her, she feels alarmed. They come home. Her uncle asks her to come for some work in his room. She helps him and they get into a talk. He stares at her low lined neck. She feels odd and leaves making an excuse. She finds his behavior changing, the way he used to see her, she did not like it.

Ankita feels maybe she is overthinking. The next day, they practice dance on the roof top. Ankita again feels that her uncle is staring at her with a bad vision. He says I will teach you some simple dance steps. He holds her waist and gets closer to her asking her to feel sexy and let it go. She says I can’t dance, its fine and leaves. She says her uncle was Mr. Perfect for everyone and she did not ever think he would do such thing with her. Ankita feels like she is on Mars, in a very different world. Its morning, she listens everyone criticizing and laughing on her.

She is lost in thoughts and walks in her bathroom. She sees her uncle having bath and runs out. He says its fine, my bath shower was not working so I came in your room to have a bath. He asks her do you have a boyfriend and asks her to relax. He lies to her that the bathroom lock was damaged. She checks the lock and find its working. She thinks why did he do this intentionally.

Ankita starts feeling uncomfortable and misses her parents. She thinks of informing this to her mum. She thinks of talking to Sangeeta but feels no one will believe her. Ankita finds Madhavi and Yash sitting on the terrace closer. Madhavi asks Ankita not to tell anyone about their affair. Her aunt asks her to go with everyone to the parlour. Ankita says everyone left me behind. Her uncle asks Ankita to help him in music arrangements. He talks to her in indirect sex describing language. She finally understands his bad motive and escapes.

Sangeeta comes back from the parlour and finds Ankita crying. Ankita tells everything about her uncle to Sangeeta. Sangeeta is shocked and says are you mad what are you saying and about whom. Sangeeta says your mentality is so cheap and low. Sangeeta stops talking to Ankita. The sangeet ceremony starts. Everyone are dancing and having fun. Ankita sees her uncle staring at her and leaves. He follows her and comes to her room. He misbehaves with her. Suddenly, Madhavi comes and he moves away from her. Madhavi asks what happened. Ankita does not tell her anything.

Ankita thinks she has to leave after the marriage is over, so it is a matter of few days, so its better to be quiet. The marriage day comes, he is after her again. Ankita shared her problem with Madhavi and Yash, and they have helped her in bringing out the truth. Madhavi gave Ankita the confidence to fight against the wrong. Ankita asks Yash to record everything so that everyone can know the truth that she is not wrong. Yash is shocked to know what his father is. Her uncle tells her that he loves her a lot and he is crazy about her. He talks dirty. Everyone see this scene on the big screen as this was Ankita’s plan. Ankita slaps her uncle infront of everyone. Madhavi says she is proud of Ankita. He gets slapped by his wife too. Ankita says Madhavi did not like me since beginning, but she has helped her at the hour of need. Finally, Ankita gives her advice to everyone that we should not cover up anyone’s mistake.