Karan starts the show about how girls fought back from their assault and won. He speaks about Sanjana gupta from Mumbai and says that attack on her has left her without any confidence. But her destiny doesn’t allow her to remain in that living situation..

The story starts with Sanjana looking in the mirror and preparing to go to her office. She is then seen at her workplace where her senior congrats on her reports because of which all the team will get bonus. While returning in evening, her boss invites her for a coffee and both leaves to a coffee shop. At the coffee shop, both starts speaking and suddenly she starts looking at a couple there and gets reminded about a very bad incident of her past. She runs away with fear from that coffee place at that instant. She comes home and thinks about the man who is seen wearing masks in that past incident scene. She gets a call from her boss and cites her headache as an excuse for her sudden exit. 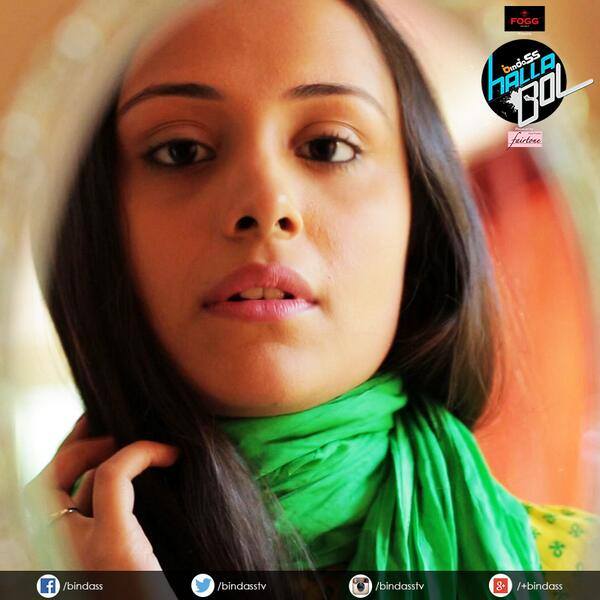 Sanjana while lying on the bed thinks again of the past horrible incident which still haunts her. Next morning, her father calls and asks about her health. He asks what happened sensing her hesitation while speaking. She informs to him that the person-Rajeev is here and she has seen him at a coffee shop with a girl. Her father suggests her to be away from him and also reminds her of her words that she had spoken in the past while being treated at hospital.

The story goes back in flashback where Sanjana is seen in a hospital recovering from an acid attack and she insists to doctors and her father for seeing her acid marks that covers her neck and face..She tells that now nobody will come close to her and everything is finished. The father says they don’t have enough evidence against the culprit Rajeev and thus cannot do anything against him. She says what will happen even if we kill him, nothing will be like before. She cries and speaks that she doesn’t want to fear anybody and even rajeev. She only need to fight herself now, and she will do that, and will start her life again. Her father supports her.

The flashback ends and Sanjana is seen visiting a coffee shop to meet a girl who was seen with Rajeev. She introduces herself and tells her to be away from Rajeev as he is very dangerous and can do any worst thing to her. Rajeev’s girlfriend asks her how does she know about him ? She tells rajeev and her were engaged some years ago and they were supposed to get married and were happy.

The flashback scene comes in with Rajeev telling her to make tea for him and sooner he sees a message on her mobile and becomes angry after seeing it. He tells her why her friend – kaushik has sent a message and he has already warned her to not talk with him or be in contact, and soon becomes furious. Sanjana tells that she will decide herself and will not listen everything what he says. He holds her hand tightly and pushes her badly. After this incident, she broke her marriage plan with him. Sanjana’s father tells that he will marry her daughter to some good person. For many days, she avoided his messages and calls. But one day, in night, Rajeev comes from behind, and throws acid on her face and neck as a measure of revenge since she didn’t took him back with her. He tells her after throwing acid that now she will never be accepted by anybody and this is her punishment.

Then, the flashback ends and Sanjana shows her acid marks to Rajeev’s girlfriend and tells that even after going to police, and also doctors for treatment multiple times, her attack marks are still present and also nothing has happened to convict Rajeev of his crime. She tells that whatever happened to her cannot be changed but she hopes it should not happen to her..At that time, rajeev comes there and asks her who is she. He tells her girlfriend that Sanjana is mad and somebody else has thrown acid on her. He consoles his girlfriend and tells that he did not anything wrong and makes her believe as he is innocent.

Rajeev comes to Sanjana’s home with a mask, and tells her that if she dares again to visit her girlfriend – Indu with whom he is engaged and speaks any ill about him then she has to bear the consequences which even she cannot understand or imagine. He brings with him acid and pours on the mask so as to instill fear in her mind and tells her to be away from Indu. He tells that plastic surgery only helps to some extent, and she doesn’t know how much bad he can do to her.

Sanjana goes to office, and her boss drops her home in the night.. She requests him to drop her inside her home as she is afraid and then speaks with him inside her home and tells about Rajeev and also the terrible acid attack incident. He tells her that there is only one way to combat this – informing police. Both goes to the police station and complains about Rajeev, there Rajeev and Indu counter’s sanjana’s complaint and tries to depict that rajeev is innocent.

Karan Tacker (the host): Police can temporarily arrest Rajeev and after that he can go scot-free. Sanjana was helpless and she only has fear in her mind.

After some time, Indu comes to meet Sanjana and tells her that Rajeev is very dangerous and has beaten her a lot. She apologizes to Sanjana, sanjana provides her accommodation at her place for as long as she wants. Both of them stay together and Indu tells her that she is pretty. Sanjana responds that even after 3 years post the incident, it was difficult for her to see herself in the mirror and then thought that if she is afraid of herself then how she can deal and live in this world. Many proposals came but they rejected her because of her acid injury. That’s why she came to Mumbai from Pune and thought that she will be fine here. Indu apologizes to her again, and tells her – How much they can run away from him ? and also appreciates Sanjana’s help to protect her from Rajeev.

Sooner then, while Sanjana is walking on the street during night, she feels somebody is walking towards her. Then, Rajeev comes and pours water on her face and tells that he could have also poured acid on her again. He tells her to advise Indu to come back to him and she knows what he could do to her if she doesn’t agree.. Sanjana becomes dejected and walks back recollecting her experiences with Rajeev. After coming home, Indu asks her what’s going on, and then knows herself that rajeev has frightened sanjana. Sanjana says they are not leaving anywhere and she will teach him the lesson whereby he will get the same feeling of fear that they get everyday. She will make sure that fear will get to him.

Karan Tacker (the host): Sanjana was afraid but she never ran away from the problem and decided that she will teach a lesson to rajeev and rajeev was unaware of Sanjana’s fightback.

She goes and throws vinegar on him to frighten him and tells that it could also have been acid. After this, Rajeev goes to his home and gets a call from Sanjana and he tells her that he will not leave her for this and will take revenge. She warns him to be more careful. Both Indu and Sanjana goes to his home and pours acid on his photos and destroys them.. Rajeev comes home and sees the damaged photos on his walls.. He calls her and says how she can fight with him ?. She tells him that Is he angry with only photos being damaged and tells him to imagine how she dealt with the acid attack since many years. He becomes more furious and wants to kill her and also her anger. Rajeev searches for the acid and takes it with him before going to sanjana’s home..

He comes to Sanjana’s home and says that revenge is taken and not just merely to speak for frightening people. She replies that she is not afraid. She asks him what was her mistake ? why did he throw acid ? He replies that he did it so that nobody will marry her and also to teach her a lesson for not accepting him. And says that he has only damaged her face with acid but now will do more harm.

She smiles and tells that it was very difficult to collect evidence and its good that you have confessed yourself.. She then slaps him heavily… She tells that she will now see him getting rotten in the prison. The police comes, arrests and takes him away as they have recorded his confession conversation with Sanjana.

Karan Tacker (the host): Sanjana fought back, she stood up and won. We salute her spirit and courage.

Shruti Merchant (choreographer) guest on the show talks about her dance student who was a victim of an acid attack. After that incident, all her desires vanished. But, she decided to fought against it because of her will and as of now, her student runs a dance school. She says when a man’s ego is hurt, why to think of only revenge, she says that a solution can be reached even by speaking and thinking carefully so as to sort out the things. Learn to respect a women’s choice, be a gentleman. and to respect a women’s priority is what a real man is.

Karan Tacker (the host): signs off by saying until next time – Don’t be silent, stand up, raise your voice and say – Halla Bol, Change Aayega.. Hum Laayenge..

Some Info on Cast:
Sanjana – is played by Anupriya Kapoor (her Wikipedia page)