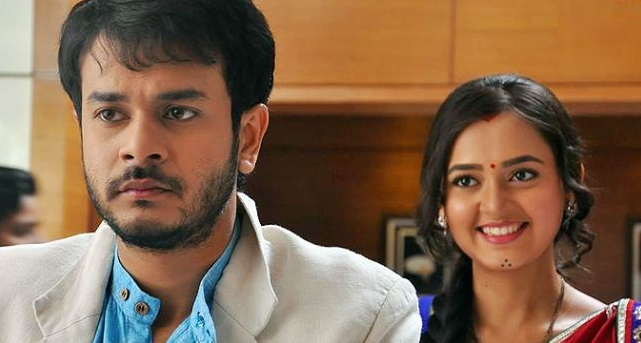 Jai has come to know the truth that Dipika has fooled him about her pregnancy. He has seen the video CD in which it is made clear that Dhara has spent the night with him in the hotel room and he is the father of Dhara’s child. He feels his love won and Dhara is pure who loves only him. Jai is very happy and makes a plan to make Dipika admit her mistake. He takes Hasmukh and Dilip’s help. Hasmukh tells the pandit that Dipika is pregnant and this marriage can’t happen according to Hindu rituals, as a pregnant lady can’t take the rounds.

Dipika is shocked in the mandap and tells Jai that she is not pregnant. Everyone are moved by her such a big lie. Jai tells them Dhara’s truth that she is pregnant with his child. Ansubaa and Parul’s trust wins. They are happy knowing Dhara did not cheat them. Jai tells Dipika that he loves Dhara and he will not marry her.

Dipika gets angry and shoots at Jai. Dhara realizes her dream was the same one and to save Jai, she comes infront of him. She gets shot and is injured. Jai rushes her to the hospital and prays to the Lord for the first time after seven years, only to save Dhara’s life. He walks on the burning coal and prays. The Lord answers his prayers and Dhara recovers. Dipika’s character is going to end in the show with this track. Dhara and Jai finally unite and love blossoms between them….