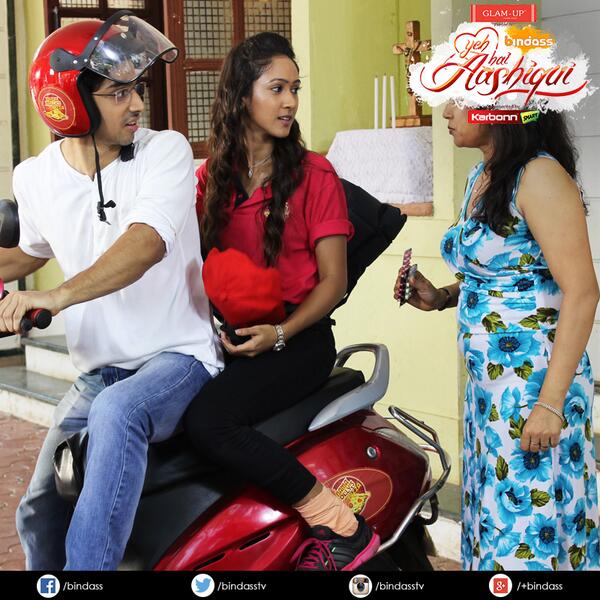 Rithvik welcomes all and says that we heard people saying that life teaches lot of things but says that even death teaches us much more. He says that after seeing today’s love story of Rahul and Mona we will appreciate life and value it more.

The story starts with Rahul in his room taking photos of his books and documents on his mobile and writing down notes. He then keeps a cheque and then looks at a manuscript – The sake of their love by Rahul Kapoor which has a rejected stamp. When Rahul is driving outside on his bike, he remembers people making taunts on his writing and informing him that his novel cannot be published. He then drives carelessly and wanting to die. Sooner, his bike hits the scooty of a girl – Mona because of which Mona falls down on the ground. Rahul apologizes to Mona as her knees and legs are hurt. He takes her to the hospital and the doctor advised her to not drive for 1 week. She says that her pizza delivery work will be affected and tells him to assist her in her pizza delivery work.

Rithvik (the host): Rahul agreed and said yes to work. Both Rahul and Mona doesn’t know what will happen in the next 1 week.

Mona’s friend at her home suggests that the boy is sweet and innocent. Mona then tells her friend Palak that nobody can come close to her as she doesn’t want anybody. Palak speaks about her boyfriend who will be visiting her. Mona ponders on getting a boyfriend for at least a week as she heard about Palak’s boyfriend. Palak goes to open the door as there was a bell. Meanwhile, before Palak reaches at the main door, Palak’s aunt Mrs. Deeza starts speaking with Rahul, thus Rahul comes in instead of Palak’s boyfriend and her aunt thinks that he is Palak’s boyfriend. She inquires lot of questions and doesn’t let Palak to explain about the confusion. The aunt thinks that Rahul wants a living relationship with Palak and a roaming relationship with Mona. Sooner, Mona comes in and clears the confusion with Mrs. Deeza.

Rahul takes Mona with him on her scooty and she tells all good things about Mrs. Deeza. (tujh se main takraiya tujhe lagya bechara). When the scooty jumps on the road then she thinks that he is hitting on her and wants him to drive fast to deliver Pizza. They reach the pizza shop and starts talking. He says that he will not eat pizza slice anymore in the next 4 days as has eaten a lot in the past 3 days. Rahul speaks philosophically about life’s existence. She compares the life to a pizza – plain bread and we put all toppings according to our mind. She requests Rahul to drop her at Anjali’s party as her foot is still injured. He then agrees to drop her and find her very beautiful in her party dress. She is happy to hear his compliments..

Rithvik (the host): Now, Rahul has changed and just 1 week before he wanted to take his own life.

Rahul now starts to feel for Mona and remembers about the time spent with Mona in the last 4 days. He says that Mona is very different which he has never seen before, she changed from strange to good and good to the one which we like the most. He says that she is the one who lives her life so fully so that he feels the life to be good when he is with her. Mona speaks with Palak about how Rahul was embarrased last time with her when she highlighted his looking very hot compliment.

Mona then finds Rahul sitting in the garden alone and drops from their auto. Mona goes to Rahul and asks him what is he doing so late in night. He says that his friend has a night duty and so he left the house much before he reached home and thus he couldn’t enter his appartment. Mona tells him to spend the night at their home and by insisting much takes him to her home.

She brings him home and speaks on the terrace and also gives him blanket and pillow so that he will have a tight sleep. When he says that sleeping on terrace is like sleeping in the garden, she responds that on the terrace he has got her, drinks, blankets..He becomes happy on hearing it and tells that night time is his favorite, She suggests him to go to Goa as there the night life is very vibrant and also magical. She asks him – I am very beautiful, right ? He becomes surprised and tells her crazy. She says that he can look at her as she don’t mind. She then asks about his work. He says that he came from Nasik to Mumbai to become a novelist. But, he got many rejections from publishers and still remains in the same situation as he was 4 years ago. He says that he is much worse now as he doesn’t have hope which was there before.

She suggests him to write and wants him to chase his dreams. She gives him a topic and wants him to come up with a short story. She first says Mona and he responds its you. She then corrects him and says that he need to tell a short story on Mona. He starts the story – Once upon a time there was a Princess whose name was Mona…. with song Thodi Thodi Khati se uske aankhen thodi sur mein bhari. Rabba Rabba mera. playing in background while he continues with his story.. She eyes him and says that the story was too beautiful and asks him does he believe in fairy tales ? He says that he doesn’t know about fairy tales but this kind of love do exists. He then leaves from Mona’s home as morning was approaching.. Mona also begins to feel for him..

Their relationships becomes stronger and they go more often together on their scooter. Another time, when they were about to leave from Mona’s house Mrs. Deeza stops them and gives Mona her medicine. Rahul after seeing it asks and Mona responds that it is actually a pain-killer. The aunt speaks that Rahul doesn’t know the truth about Mona’s medicine and she wishes God to give Rahul strength as he has started to grow concern for Mona. At their pizza delivery place, Rahul encounters the same publisher who has rejected his manuscript earlier and even told lots of degrading words on his writing. Rahul says to publisher that one day will come when he will come to his door offering him to write a novel.

In the evening, Palak tells to Mona that she is glowing a lot. Palak then explains about her love for Rahul and says though she has already recovered from foot injury but she still continue to use bandages and cover her foot. The aunt comes in and says that her situation is not good for Rahul. Mona cries as she loves him and cannot leave him though she has some medical condition (unknown).. (Gustakh Dil song)..

Next morning, when Rahul comes to meet at her home, her aunt tells him that she has recovered well and now his job has been completed and then closes the door. He becomes amused with the behavior of Mrs. Deeza and calls Mona on her phone. Mona doesn’t take his call and cries in her room. Palak suggests her to take his call to which she responds that if he calls Palak then tell him to leave from her life. She speaks to herself – Sorry Rahul we cannot meet in this life and cries profusely.

Rahul comes to Mrs. Deeza’s Pizza shop and asks her about Mona’s sudden change in behavior. The aunt says that Mona has brain tumor and it can bursts anytime. She says that Mona doesn’t like crying and wants to die happily with a smile. She suggests him to leave as she doesn’t want to see her in more pain.. Rahul after hearing this comes to meet Mona again at her home.

Rahul now opens up about their first encounter when they had an accident and tells that he was actually going to give up his life and about to die on that day but because of their accident that plan didn’t materialize. He tells that he never understood that he will fall in love in one week and also her moments will affect him so much and calls himself a Duffer. Mona says that the truth is Mona’s life has very short time left. Rahul reminds her about the Pizza analogy of life and tells that he has chosen and ordered the pizza for his life and then proposes – I love you and tells that he will never leave her..(Iss Dard Dil ki safarish Ab koi Karde yaha song playing) while they share some close moments. Palak sees them close and cries with happiness.

After that, Mona starts to prepare for her wedding and dresses in a bride dress. She says to her Aunt that she has fallen in love with Rahul thus marrying him. She meets Rahul who finds her very beautiful and hugs. At the same time, she becomes unconscious and an ambulance is called and they quickly take her to a hospital, At the hospital bed, Rahul stays with Mona and both speak. She says that their first date is in a hospital and he reminds to her that their first date was at her home one night when they spent the night on terrace. She wants a promise from him that he will never attempt a suicide. He responds that he will not do that as the publisher has to come to see him for his novel. She wishes him the best and tells him to marry and settle down with many kids in the same way as the fairy tale that he spoke on the terrace one night. She speaks if a girl is born then tells him to give the daughter her name. She asks him for a kiss and he kisses her. As she is dying, she wants him to leave as he doesn’t want him to see her die. (Bhulana na de mujhe.. Tujhe jeena hain mera bina song playing). After much persuasion, Rahul leaves from her side and just after that she dies..Rahul walks in the hospital corridor and remembers Mona’s last words and all the time he spent with her.

Rithvik (the host): After Mona’s death, Rahul has published his fourth book – Life is like a Pizza and it became the best seller. Until now, Mona’s name is still engraved with Rahul whenever he calls his daughter’s name which is Mona. Rithvik then signs off by saying – Yeh Hai Aashiqui (This is love).

Some Info on Cast:
The girl who will eventually accept Rahul’s love: Played by actor Krissann Barretto. She is a dancer/law student. She recently played the role of Alia – 23 year-old Swimming student in Channel V’s Heroes-the fightback files. Facebook page of Krisann.