Kapil starts the show and welcomes all. Kapil speaks with Siddhu and asks him that as he is round the clock away so he might have not have seen a daily soap. Kapil then goes on to say that daily soap is such a weapon which has made women quiet. The trend of daily soap was started by Ekta Kapoor who made the women busy at home while making Ragini MMS 2 made men busy outside invoking a laughter.

Sooner, a man comes to meet Bittu sharma and introduces himself as the director of daily soap. Anandi wants him to shoot fast. The director informs them by enacting a scene and says that now Bauji will come. He wants to focus and concentrate with devotion and Bauji will surely come. Kapil starts to chant bauji’s name with devotion and sooner Alok Nath comes on the show and walks with very sincere devotion of God as he walks down the stairs to meet Kapil on stage. Kapil greets him by lying down on the floor and trying to touch his feet.

Next, Daadi comes on the stage with (Om Shanti Om tune playing in background) and at first shows shyness towards Alok Nath. She calls Alok and touches him and asks him – Mera Nath, Did you identify me ?, Mera Swamy. She says that was his wife in Maine Pyaar Kiya movie for which Bittu responds that Alok Nath Ji didn’t have a wife in that movie.. Daadi confronts Bittu about it and says, How come Bhagyashree was there in the movie, and asks whether Bhagyashree got in a lucky draw ? Bittu praises Alok Nath Ji’s Baujigiri (hold as a father figure) and health.. 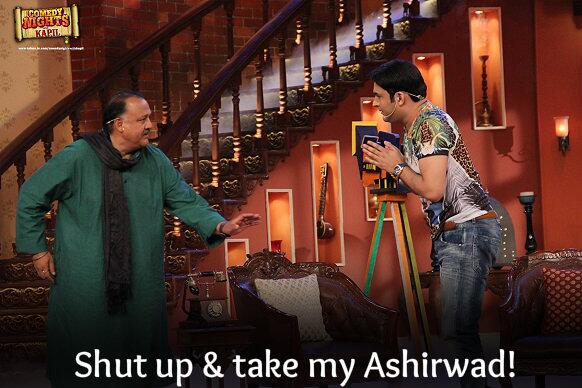 Alok Nath ji speaks with Siddhu that both marriage in court and by a Kanyadan (gift of a maiden) from him are both valid and amounts to an official marriage. At this point, Anandi comes back with the director and reiterates that she knows that he has gotten an All India Permit and because of which she wants his blessing.

Alok Nath ji begins to give her the blessing and is then stopped by Bittu Sharma’s wife. The director talks on the twist in the story and wants Mrs. Sharma to walk in slow motion. Mrs Sharma comes and says that she is actually Bittu’s wife. Alok Nath ji suggests to Kapil because of TRPs, he has brought another wife. Bittu says as he didn’t got a full first wife so he got a second wife. Alok Nath ji talks on the Sanskaar that he taught him and Bittu tells him to some kind of Aashirwaad (blessing) to Mrs. Sharma. Sooner, Palak stops Bauji by shouting and informs that she is Bittu’s wife. Alok Nath ji becomes annoyed with Bittu and wants him to share the list of his wives. At this point, Raju comes with a Dupatta (tippet/scarf) and declares himself as Bittu’s wife. Alok Nath ji’s mind begins to revolve with utmost confusion. He makes them calm down a bit and speaks with Siddhu that he never utter a bad word against people, but today he saw so much love and affection where he has 4 wives showering their love for one man. Because of this, he is now in overflow mode and very much moved. Alok Nath ji then shows his anger by saying – Atta Masi Satakle… and chases them with a Knife and taunting on their request of blessing. This episode of CNWK has lots of laughter and fun moments with Alok Nath ji participating in enterprising comedy along with Bittu and his family with full heart and love for his audience.

From last week’s preview of this week:
A girl from audience asks him, Does he remember when he became Babuji for the first time ?
Alok Nath Ji: responds that his story took a 30-year old leap just after he was born making Daadi and Bittu amused as well as making them to burst into laughter.

Alok Nath Ji speaks with Daadi that because of becoming Babuji he has not seen Childhood, Teenage days, and even Ragini MMS invoking a laughter..Daadi requests Alok Nath Ji to sing a song for her.. Alok ji responds by chanting a devotion hymn (prayer song) – prabhu anand data bhagya ujjal kijeye chod de chal kapat maansik bal dejiye.. After this, Daadi showers a Kiss (Shagun ki Pappi) to Alok ji with which he begins to shake.

* Alok Nath ji was born on 10 July 1956 and work as an Indian Television and film actor
Notable works:
– Haveli Ram in Ramesh Sippy’s television series, Buniyaad,
– Bhagyashree’s father in the 1989 film – Maine Pyar Kiya
– Poonam’s Chacha (uncle), Krisha Kant chacha in the movie Vivah (2006). Poonam was played by actress Amrita Rao.
– As most of his roles were of father/uncle, hence he is also called as Bauji. Further, annotations such as Sanskari (full of culture), pious are also added.
Read More about him on his Wikipedia page

* Kanyadan (Gift of a maiden):
Kanyādān is an important Hindu wedding ritual and different interpretations of Kanyadan exists in different parts of South Asia. The significance of the ritual is such that it makes the bridegroom to think that his wife is the most precious gift given by the God Vishnu while the bride thinks that her husband is a form of Vishnu. Read more on its Wikipedia page.

* Toral Rasputra is an Indian television actress is aged 26 yrs born on 26th December, 1987 in Anjar Kutch, Gujarat but brought up in Mumbai. She studied degree of Arts from St. Xavier’s College Mumbai. Past work: role of Priyanka in Dhoom Machaao Dhoom; Current work: role of Anandi in Balika Vadhu. Read more on her Wikipedia page

You can also find the Comedy Nights With Kapil 17th May 2014 on Colors – Written Update with Alok Nath with more elaborate details on the episode.