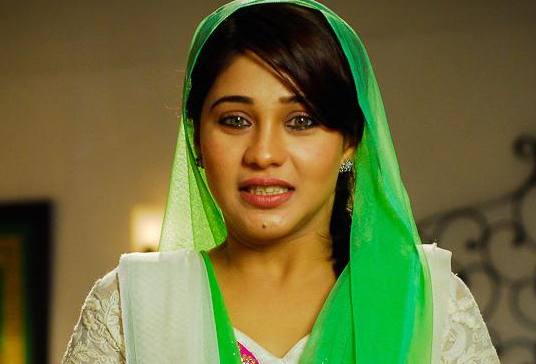 We have seen how Aahil has played a stupid trick by adding weight under the machine to make Sanam lose the 100kg laddos task. He taunts Sanam and asks her to bend down on her knees and touch her nose to the ground, to save her pride, but love her self-respect forever. Sanam breaks down in tears and bends on her knees. She sees the extra weight that Aahil has slipped under the weighing machine and exposes Aahil. She shows it to everyone around and taunts back Aahil. She tells him that his exaggerated ego has made him do this, as he could not think to lose to a servant. She tells him that he has given much importance to a simple challenge with an unimportant servant. Aahil is shocked and speechless. Sanam gets angry and breaks a bottle showing it against Aahil. Everyone is shocked thinking what is she upto. But cool down guys, that’s half story, no more tension in the show, as this is the start of a solid love story between them, which starts with fights and ego hassles.

Also, the show will have Tanveer’s re-entry soon. She is the queen of evil planners. She is Billo Rani of Qubool Hai. The wicked woman is back and brings a black cat with her this time. Aahil is really happy seeing his mum back from jail and hugs her with much love. Tanveer sees Sanam and plans to make her life hell. While Sanam does not know Tanveer’s connection with her parents Asad and Zoya, we wonder what will she do when she finds out. Meanwhile, Haya is finding it difficult to stay at Munisa’s Haveli where her husband eyes her lustily and always seeks a chance to touch her. Haya does not feel safe in his presence. She is gorgeous and her beauty became a problem for her. While Dilshad always protects her, but that man is such a creep who always finds reason to get close to Haya acting sweet infront of Dilshad. While the two ladies Sanam and Haya are facing problems, the vamp Tanveer is the one to watch out for. How will Haya save herself from Munisa’s husband? What will be Tanveer’s next plan against Sanam? Keep reading.