Rithvik Dhanjani (the host) starts the show and speaks that people meet, and eventually fall in love after a while. But how about meeting someone in your daily routine and finding love on the same day. The story of such a kind is of Ayush and Prakriti who were both strangers but later realized it was not just coincidence (Ittefaq in hindi) that they met and fell in love, today’s story is about them.

The story starts with Prakriti looking anxious and then goes to a train booking centre so as go to book a train for Mumbai but at first finds nobody at the ticket counter. She later learns that the train will leave at 11:00 PM. She decides to get a ticket and after buying it runs to wait in the waiting room. She remembers a harassment scene with her by a man and walks inside the waiting room. On the other end, Ayush scolds his friend for not being able to book a hotel for him. He doesn’t want to wait another 3 hours. Soon, he begins to cough hard and Prakriti comes to help him with water. He finds pepper spray with her and asks her why is she so afraid for coming outside ? He insists on not drinking the water from her bottle as she used it before but as he continued to cough hard, she forcibly puts the water bottle in his mouth and he drinks it.

She speaks that some patients should be treated like this, and he then asks her, Is she a doctor ? She replies no, but a compounder (pharmacist), who knows her duty to serve patients. Both share an eye lock and she introduces herself as Prakriti and leaves. He speaks to himself that nobody cared for him without foreseeing any benefit and she was the first person to help him and is very different from others. Ayush’s friend comes to apologize to her on behalf of Ayush and cites that because of tension Ayush is behaving a bit rudely. She responds that everybody has tension so there is no reasons to behave rudely.

Soon, she is informed that there are riots outside and they have to leave the place. Ayush comes there and asks about her parents. She becomes worried and he then learns that she is engaged and has a fiance but doesn’t want to call him for some reasons known to her. Both of them then sees the news of the riots and she decides to stay in the station in Vadodara and the riots were going in some other place Godhra. She begs him to leave her alone but he decides to not leave her in that precarious situation.

Rithvik Dhanjani (the host) speaks that Ayush was arrogant and looks hard from outside but from inside he is just the opposite. He was feeling very protective for Prakriti and he even doesn’t know why so.

The riots sooner started close to the station and the situation is still tense but Prakriti still wishes to stay at the station. Ayush comes there and speaks that he will not leave her since she was the one who has helped him earlier even without knowing him. She begins to cry, and he informs her that normally girls cry after seeing him. She speaks on getting so much care so she got the urge to cry. He also responds the same, and after then she smiles a bit. Sooner, they listen to an announcement informing them about the curfew outside and wants people to stay indoors. After then, both looks at each other and become worrisome. The station master (incharge) gives them ultimatum to go from there. But she still persists in not going, and Ayush tries to convince the station master and finally gets the approval to stay. The station master spoke about his family but after seeing Ayush’s reasoning that even outside is not safe and then agreed to stay with them. Prakriti sees Ayush’s care and decision to stay just for her but he clarifies that he is staying for himself and not for her. He wants her to be quiet and leaves.

He then asks her whether she needs a phone or wants to inform somebody, and suggests his friend (also assistant) to bring some smile on her face. Sooner, she smiles after hearing his friend’s jokes and Ayush feels good to see her happy. After a while, they are informed via TV that riots are spreading in different parts of the country, and she finds her fiance (who has abused her earlier) thrashing people and involved in riots and falls down. She also learns that Ayush is having Asthma and therefore has allergies of dust and also cannot drink the water from other’s water bottles. He holds her hand so as to support and suggests her to drop home. She responds of not having a home and decides to stay there since her fiance Hitesh is doing rampage outside and engaging in riots. He then learns that she is running away from her fiance and she informs them about Hitesh who has helped her family financially in distress. Hitesh has taken care of her father’s medical expenses so her mother thinks him as God and had arranged Prakriti and Hitesh’s proposal because of which she was engaged with him. 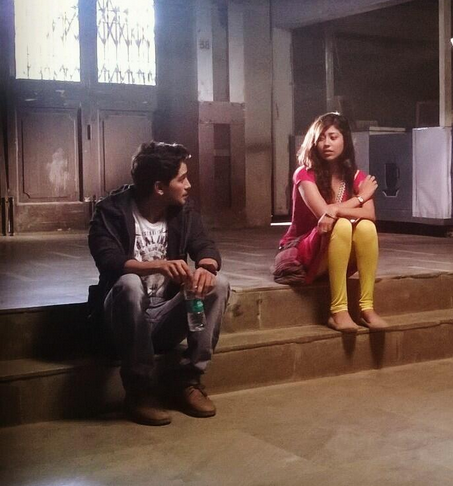 Though she informed her mother of Hitesh’s rebellious and rowdy nature but her mother insists that she has to stay with him and cannot say no. She reminds that Hitesh with his money has almost bought her family and on one occasion came to her girl’s hostel uninvited and started boasting of his money and his right over her. He doesn’t want to marry him, he then asks her to payback all the favors that he did for her family specially his father’s medical expense. He taunts how would you do, tell me ? She replies this month but he is not willing to accept that and wants money now. He then goes from her after threatening to come next day as he feels pleasure and relaxation.

Prakriti continue to speak more with Ayush about Hitesh, and calls him an offender who harasses girls and does bad things at his will. Since her parents were not helping either so she ran away from the hostel since he was supposed to come there the same day. She cries and he gives her napkin and suggests that he will not stop her from crying. He also suggests that she looks better if she smiles, and again asks her whether she decided to not go from there, and pledges to protect him. She asks him why does he speak rudely with people ? He responds that to keep selfish people away, and she thinks that he might have not met genuine person until now. He responds that he just met a genuine person today and looks at her. Both share an eyelock, and she speaks whether they are friends ? He replies that he doesn’t want to make friends, then she asks how are they related ? He asks whether she is ready to hear what he wants to say [Khuda Ya Veh.. Hain.. Ishq Hain Kaisa Ajeeb Re.. Dil Ke Khareeb Laya..Dil Ka Naseeb Re.. Khuda Ya Veh..Hain..Ishq Hain Kaisa Ajeeb Re.. song plays ].

Rithvik (the host) speaks that Prakriti always wanted a boy who will take care of her and also provide her protection and she was getting both things with Ayush there at the station.

Ayush and Prakriti finds rioters doing lots of damage just outside the station and she soon finds her fiance Hitesh carrying sword and leading the rioters. She begins to cry and feels much pity on the situation. They tried to escape and hides themselves inside a train. He wants to protect her and she asks why ? [Dil Mein Jaage.. Ishq Wale. Mann Marzi.song]. He replies there are only few people in his life who touches his heart and they share an eyelock again. Hitesh and other rioters comes near the train, and looks for the people very carefully. Hitesh gets hold of station master Janardhan Lal and asks for keys to the train. He threatens to kill him if he doesn’t agree. The station master doesn’t agree and is then stabbed by Hitesh with a knife and is killed. He then comes inside the train and looks for people who are hiding and finds Hitesh’s friend, Prakriti, and Ayush hiding.

Ayush doesn’t want Hitesh to touch her, who then makes a taunt at Ayush- Pati, Patni aur Woh. All three of them are dragged outside the train and Hitesh calls Ayush a chocolate boy. Hitesh gets hold of Ayush’s friend and continue to threaten Ayush with dire consequences. The friend calls the police and puts his phone on hold and the police listens to their conversation happening at the train station. Hitesh makes an offer that if they leave the girl for him then he will not hurt them. Ayush again tries to confront and hit Hitesh’s men and is again confronted by Hitesh. He speaks that he can give his life for Prakriti and Hitesh then decides to stab him with a sword. After seeing this, Prakriti decides to go with Hitesh and begs for Ayush’s life. She reiterates there are very few good people like him and he has already done lot of things for him so doesn’t need to do more.[Ek Toota Khaab Tha..Piya lage Na Giya Lage Na..song]. Ayush decides to fight for her and gets thrashed by Hitesh and his men. When Hitesh is about to stab Ayush, the police comes there with RAF and arrests Hitesh.

The police asks whether she is with him, and he answers yes. She becomes happy on hearing the same and looks at him with sincere emotions. She asks whether she is with him ? He responds that she will be with him for his life after which she responds not just for life but even after life. Both share smiles and hugs each other becoming a lovestruck couple [Yeh Hain Aashiqui title song plays.]. He kisses on her forehead validating the love.

Rithvik (the host) speaks that on one end the city was in turmoil and on the other end Prakriti and Ayush fell in love during those circumstances and had only each other’s support. After getting relieved of all the stress, they got married and continue to live in Mumbai.

Info on Cast:
* The role of Prakriti is played by actor – Nida Chakraborty.
– She recently (13th April 2014) played the role of Arunima in Channel V’s Heroes show on Fight Stalking Episode. If interested, you can read the written update of that episode on our website here.
– Nida’s Twitter page to know more about her.

* The role of Ayush is played by actor – Harssh Rajput. Harssh’s Twitter page.