Home Star Plus Iss Pyaar Ko Kya Naam Doon Ek Baar Phir Is Niranjan ahead of Astha? Astha to give him another shock by...
Facebook
Twitter
Pinterest
WhatsApp

Niranjan was hell bent angry on Anjali and was ready with his belt to service his anger to her. But Astha asks Anjali to lie to Niranjan saying they went to temple and she did a jaap for him. Anjali fools Niranjan by this lie, and presents him the Prasad. Niranjan gets really glad knowing Anjali did a jaap for him and made Astha do the jaap for Shlok, trying to turn up Astha like her. Niranjan thinks he is ahead of Astha. He overhears Shlok and Astha talking and comes to know about their candle light dinner date. He tries to show Astha that Shlok’s love and worry is only for him. He wants his son to love only him and not his wife.

Mean, cruel and cunning Niranjan, is upto his next plan now. He plans to make Shlok busy in work and go Mumbai so that he can’t go out with Astha for their dinner. He makes Shlok believe in him and follow his words.Astha waits for Shlok and she rather understands that its all Niranjan’s homework against her by keeping Shlok away from her. But will our cutie pie Astha be silent? No, she will give a good answer to Niranjan as she is not a loser, as she now has Anjali too to support her. Niranjan told his plans to Anjali, what will he do and how he will fill Shlok’s heart with hatred for Astha, thus cutting him off with Astha forever. But this time Anjali will not help him, but will help Astha and Shlok to be together. Astha and Shlok will still go for their romantic dinner and spend good time with each other. Shlok will be singing a romantic song for her which will be leaving her happily shocked. Astha too will join him in his efforts, followed by the dinner, where Shlok will make her eat. Astha will surely not forget this romantic date. Shlok expresses all his feelings to her. This is surely a must watch scene!! 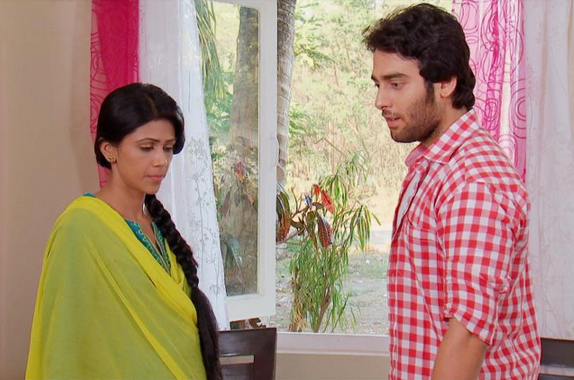 The other track in the show is of Jyoti and Sid. Astha is playing cupid between them. Renuka comes to the hospital with Sid on his insistence as Astha informs him of taking Jyoti to the hospital. Astha asks Sid to go and meet Jyoti who is sitting at the corner. Astha makes Renuka busy. She talks to Renuka while the latter starts chattering. Sid meets Jyoti and takes care of her. He is really happy to meet her. Astha knows Renuka in unaware of Jyoti and she does not let her see them. Sid wants Jyoti to reciprocate his feelings, but he understands what Avdhoot told him, about the problems Astha would have to face because of him. Astha sees Jyoti being much happy with Sid and feels Sid will be best for her and he will accept her daughter too. Astha knows Jyoti too loves Sid but is afraid of her family and society’s taunts. Astha decides to help these lovers reach their destination of marriage.

While the ‘everything is under control’ believing man Niranjan is unaware of this big issue cropping up. Astha will be giving him a major shock. We are waiting for Niranjan’s expressions when he comes to know about Jyoti’s romance with Sid. Niranjan wants Jyoti to return back to Abhay, but Astha won’t let this happen. Afterall Astha has many people to support her now, Shlok, Varad, Vinayak Kaka and Anjali too. So hats off to Astha for her brave stand against Niranjan. Mr. Niranjan Agnihotri, never underestimate the power of a common bahu!!