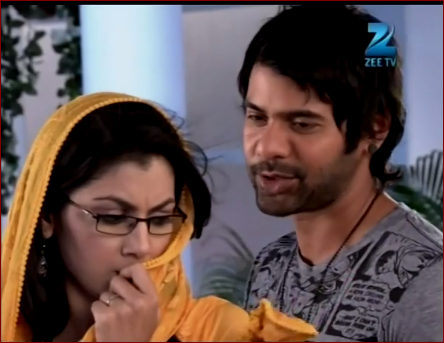 ABHI AND PRAGYA BICKERING (NOK JHOK) STARTED FROM RECEPTION NIGHT
ABHI-PRAGYA MORE NOK-JHOK MOMENTS THANKS TO PAGPHERA RITUAL
ALIA TO GO TO AUSTRALIA; PURAB CONTINUES TO NOT CLARIFY WITH ABHI
PRAGYA FEARS FOR BULBUL AND YEARNS FOR SMALL HAPPINESS

Abhi comes with Pragya at his in-laws – Sarla’s home for the pagphera ceremony. The neighborhood people regard pragya is lucky for Abhi, at the same time Suresh comes there and cites that Abhi is lucky to have pragya since she has lots of love and respect in the neighborhood. Abhi gets a warm reception by Sarla, Bulbul, Purbhi, and entire pragya’s family and also greets Pragya’s maternal uncle Kabeer, Sweety and paternal uncle Chacha. All of them showers their love by making Abhi eat lot of food and sweets. Abhi becomes completely bloated and asks for the bathroom and makes burps due to indigestion. Pragya as a dutiful wife brings him a jaljeera to clear his indigestion which he accepts to get comfort. Abhi and Pragya continue to bicker (nok jhok in hindi) which they are doing since their marriage day. Abhi calls her chasmish (spectacled) after finding Suresh at the other end after opening her room’s window.

Some of their earlier Nok Jhok moments were on the reception night before their pagphera ritual. Abhi teased Pragya by removing his shirts and pants and informs her that he sleeps in shorts though she thought otherwise (Abhi wanting to come close to her). Some other petty fights was for a cushion pillow. Pragya decides to sleep in the balcony instead, and some time later Abhi gets continuous hiccups so she gives him hot water to drink. She informs him in bickering voice that he got hiccups because of cold which he got because of sleeping in shorts. Pragya leverages upper hand on him, and all those moments between them were like banter and humorous.

Coming to Purab, he came at Abhi’s reception and learnt that Pragya is Abhi’s wife. He also informs Pragya that Abhi might have married her because of some reasons that arose after Abhi came to know that he doesn’t love Alia. On an earlier occasion he has suggested to her that because of his relationship with Bulbul these new problems are created. Sooner, Purab meets Abhi there but doesn’t speak much with him and goes away from there since Pragya doesn’t want him to speak with Abhi about her at that time. Abhi on other hand thought that Purab ran away (citing headache) because he is ashamed that Pragya being his love married his best friend. Alia at her end has informed Abhi that she has to go to Australia for attending the convocation ceremony of her studies and suggests him to not fall in Pragya’s trap and do not come close. Abhi responds that even if she becomes Apsara (great beauty) even then he will not touch her. Thus, from Alia’s perspective, from now on Abhi has to take care of both Pragya and Purab. Abhi still believes that Pragya has ditched Purab because she got much richer guy and thinks that she is interested only in money.

Pragya continues to live in the fear that Bulbul will face backlash from Abhi if he comes to know about Purab-Bulbul’s love. This is because first Alia will get hurt after learning that Purab’s love interest haven’t gone from his life, and second Abhi cannot see his sister’s pain and has even did a big favor already for his sister by marrying Pragya. Pragya is making efforts so that Purab doesn’t come to know the exact reason of her marriage since once he knows then Abhi and Alia will know as well. Pragya is yearning for small happiness in her life which she has earlier dreamed and spoken with Bulbul – making tea for her husband, head massage, simple life.

Coming back to the present track of pagphera ceremony, Abhi goes to bathroom after getting some relief for indigestion after drinking jaljeera drink. Purab also comes there at Pragya’s home to speak with Bulbul to clarify the misunderstanding and also the reason of Pragya’s marriage. Bulbul sees Purab and informs Pragya about him. Pragya thinks that if Abhi comes to know of Bulbul and Purab’s love, then things can go really bad, so she prepares to stop Abhi and Purab meetup. Bulbul tries to stop Abhi from going outside by asking different trivial questions to him but in vain as Abhi goes out to find Purab. He first speaks that Purab is like his shadow and then goes on to make indirect taunts like he should be present for the ritual instead of him. Pragya has already informed Purab to not find the reason of her marriage, and Purab therefore doesn’t stay longer and goes away. Abhi learns two things (1) Sarla haven’t met Purab before the reception and thinks that Pragya is clever and not informed her mother (2) Sarla informed him to stay that night as per the pagphera ritual and go back to his home next morning. Sooner then, Pragya and Bulbul buys a dress as a gift for Abhi for the pagphera ritual and at the shop Suresh again faces Bulbul’s scolding.

It turns out that Abhi doesn’t have clothes to wear for the night and gets Pragya’s mama Kabeer bulging shirt to wear for the night since he doesn’t have any other option. He looks like a Dhol after wearing it and Bulbul, Purbhi and Sarla gets a laugh after seeing him and also there are fun moments with his shirt which was blowing over and over many times. Later in the night after getting notice from Pragya on not sharing the room, Abhi goes on the terrace to find Pragya’s daadi (Beeji) who was seen drinking local liquor and she calls it as cough syrup. Abhi is in awe of Beeji’s attitude and drinks liqour as well and soon becomes high. He then goes to his room and teases Pragya and calls her chashmish and she sees him in drunken state and then learns from him that he drank her Daadi’s liquor. Abhi falls on the bed there and wants Pragya to close the light but at first she declines, he then comes close to her after which she feels threatened and agrees to switch off the light. Some of the pertinent follow-up questions are – Will Abhi inch more closer to Pragya as their nok jhok becoming stronger ? For how long Pragya be able to not disclose Purab-Bulbul love to Abhi ? Would Purab be able to clarify the misunderstanding with Abhi soon ? Will Pragya get some small happiness from Abhi which she was yearning so much ? Stay tuned to KumKum Bhagya on Zee TV @ 9 PM IST (Mon-Fri).