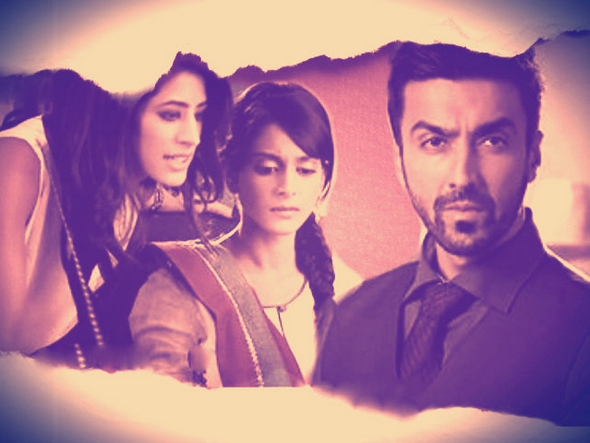 Pakhi has started being the good friend to Raghav and being around him, keeping Kalpi and her calls away from him. Raghav calls Kalpi to talk to her and when the call connects, Pakhi makes her hear what she would not wish to, Raghav and Pakhi’s sweet romance, which was not romance but Pakhi’s planned clever words usage like – Leave me Raghav, leave my hand, its tickling…. Kalpi hears this and is stunned. She gets a wrong image of whatever went on there. But her trust on Raghav does not shake, as she has full confidence on her love and she trusts Raghav more than herself. She recalls Pakhi’s challenge that she will make Raghav hers in one month, he will be giving her all the love she should get being his wife, and there won’t be any place for Kalpi in his heart.

Pakhi has turned down Kamla’s support thinking how she has hidden Kalpi’s marriage with Raghav. Pakhi is angry on her and does not want to see Kamla’s loyalty to her. Its time, Kamla should really stop worrying about her and think about Kalpi. Well, Pakhi is overconfident and dancing thinking Gauri will be helpful to her, but love is not a thing to throw out of the window, its boundless, RagNa’s love is beyond any definition. Pakhi does not know their love strength, their trust on each other, and their hearts connected. She plans to create misunderstanding between Raghav and Kalpi, by showing her friendly side to Raghav, showing her concern and taking care of him. She tries to get Raghav’s sympathy by hurting her hand and showing it to him, so that he melts. Raghav is just being caring to her as a friend, but Pakhi has high lovey dovey hopes, which will shatter soon. Pakhi does not want Kalpi to dream, but this advice goes to her. As of now, EMA track is focusing on the one month challenge posed by Pakhi. Both the girls are fighting for Raghav. Let’s see how Kalpi wins triumphant. Keep reading.