Smita comes back home and finds Patil at his home. He informs that she has left the job and asks whether he has done something wrong or she wants a higher pay. He speaks that she just left the job without thinking about him. After seeing this, Milind asks whether she has left the factory’s job. She informs him of joining another work which has higher pay so that she can return back the loan at the earliest.

Theme of the Episode : Fight Against Sexual Harassment; Don’t exploit and take undue advantage from a weaker and helpless person; Fight for your self-respect,right and justice

Milind requests Patil to reinstate her in the job. He agrees because of his bad intentions and leaves. Smita apologizes to her husband and speaks of joining the factory so to make him happy. Smita starts working again at the factory and finds one booklet about the company Pankaj enterprises and then takes out one page from it. Sooner she receives a SMS from Patil informing her to meet her in the night. After seeing it she deletes the message. Later, in the night she goes to his cabin as she is being forced to do so and again patil holds her hand and speaks what he doesn’t have ? Around that time, she puts some ring in his pocket and he is unaware about it. Soon, he gets a knock at his door and hears his wife there who wants him to open the door otherwise she will burn the factory and also expose his bad activities in front of her father. He then takes Smita inside in another room and opens the door. His wife asks about the woman he is hiding. He then counters and says that there is no women there. It turns out that Smita before finishing her lunch has went outside and called Patil’s home from a PCO and inform his wife about his relationship with some woman.

Patil’s wife informs him that she got a call which told her that he is enjoying himself with a woman. She makes a taunt whether this is overtime for him. Smita leaves from there with some happiness on her face. Next day, patil confronts smita on road and speaks that he knows that she has either made a call or told someone to inform his wife about his activities. He also says that she is the one who has put a ring in his pocket to instill doubt in his wife’s mind. Sooner, Patil’s wife Aparna comes there and he points that smita is the one who is trying to defame him. Without thinking much, Aparna slaps Smita for bringing disrepute to her husband and wants her to be away from him. Smita cries and goes away from there. After some time, she removes her tears and calms down before entering her home. Milind sees some injury on her face and asks her how it happened.

She informs him of falling down after slipping in rain outside. At the same time, she gets a call from patil who wants her to come to the factory and gives her last chance. She goes to the factory and after work at night the colleagues want her to come with them. Patil comes there and speaks that Smita is doing work overtime. The colleagues come forward to work overtime instead of her and sends her away home with other women. Patil’s plan of harassing smita failed. Later, he goes to Smita’s home to find her with factory’s colleagues women who informs that Milind is admitted at the hospital. They makes a taunt that he come inside and take tea. At this point, it is suggested that Smita has informed her colleagues about Patil’s bad intentions and molestation.

Next day, Patil confronts Smita on road and asks her until how much time she will be escaping from his clutches and even threatens to end paying for her work. Smita’s colleagues come there and take her away safely. Some time later at the factory, the workers informs Patil that they will not work until a worker gets compensation for all her grave injury. He wants them to work and shrugs off their demand. He speaks that their work is completed and the order is completed so he doesn’t need them anymore. He wants to terminate their work at that same moment. One of smita’s colleague who is championing her cause speaks that since one week they haven’t work. Furthermore, says that because he always stare and look to harass smita so he didn’t even check about their work. She wants him to check himself about the order and he finds that the order is not complete. She informs him of working to make only one footwear piece instead of the couple and they have done this so as to teach him a lesson for all his misdeeds towards Smita. He threatens them with dire consequences.

She suggests that they are just asking for the compensation for his misdeeds, and going to the extreme of beating him with footwears at his face and body. Sooner, his father-in law comes there and she informs him to look at his son-in law bad activities and harassment.The father-in law scolds Patil and wants him to feel shame. He then wants him to apologize to Smita and other women there. He speaks that in his factory never a woman was harassed. Patil then apologizes to Smita and also informs her of giving money from his side. After hearing it., the father-in law becomes angry and informs him that from now on he doesn’t have any right on the factory’s money and also wants him to not be seen at the factory otherwise he will make sure that he gets full thrashing. He wants Patil to leave from there in a strong voice, and he goes from there. Smita and her colleagues feel the justice has been done for them.

Smita at her home finds Milind making tea for her. He speaks being happy in doing such a thing. She drinks it and praises that she never drank such a tea before. He then shows her the medical report in which it is told that he doesn’t need a surgery and only medicines. He speaks of going to work soon so to repay back the loan. He thinks that patil is a good person and cites that such people are not seen in this world. Smita speaks of not informing Milind about the turbulent times she faced during the times of his illness. She fought back and got justice. Now, the factory is run by Patil’s father-in law and wife. And also Patil is getting divorced by his wife because of his misdeeds. Smita is happy at her end because of the new fresh phase of life with which she has strong aspirations. 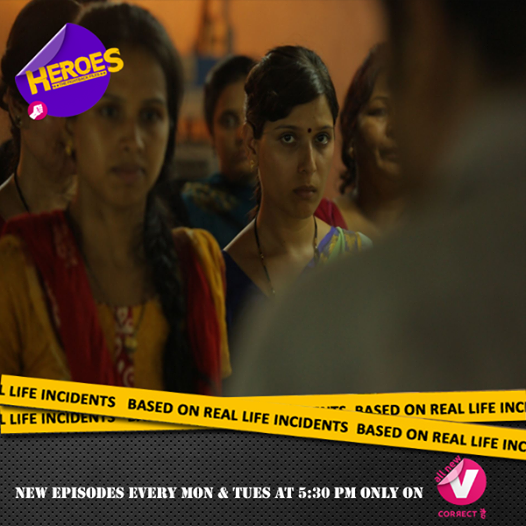