Jhalak Dikhhla Jaa 7 is in the seventh week on Colors. The theme of this week is – I LOVE (Dedicating your Performance to the one you loved the most). Jhalak has already chosen three 3 wildcard contestants – RJ Malishka, Tara-Jean Popowich, and Kushal Punjabi who are competing with Jhalak’s first-entry contestants. Today, will have performances from Puja Banerjee, Karan Tacker, Kushal Punjabi, Tara-Jean Popowich, Shakti Mohan, Mouni Roy, and the challengers Duo – Lauren and Salman.

* Puja Banerjee dances with her partner Rajit in a suave, delicate and the one with flow on the song Suraj Hua Maddham from the movie Kabhi Khusi Kabhi Gham (K3G) and others belonging to Karan Johar Songs medley.
– Dance form: Bollywood/Freestyle
– Karan thanks Puja for performing on his songs and also feels humbled and touched with her gesture. He didn’t stop there and then proceeded to hug her on stage.
– Score: 23/30

* Karan Tacker dances with his partner Elena on the legendary actor late Shammi Kapoor’s dance style and performs on the epic songs – O Haseena Zulfon Wali (More lyrics: Anjaana Dhoondti Hoon.. Dewaana Dhoondti Hoon from the movie Teesri Manzil – 1966), Badan Pe Sitara Lapate Hua (Zara Paas Aao Chaen Aa Jaiya) which is Shammi Kapoor Medley. Karan grooves in the same style of Shammi ji and even uses table as a prop in their performance.
– Dance form: Bollywood
– Madhuri speaks that Karan shook it like Shammi and he was so brilliant and has danced like a kid with holding a toy in his hand.
– Karan Tacker speaks that he has never dreamed to be part of the show and perform in front of her and then sings a song for her truly from his heart. The song is Aaja Aaja Main Hoon Pyaar Tera and sooner he dances with Madhuri on the same song on stage and feels excited.
– Score: 27/30

* Kushal Punjabi dances with his partner Mohena Kumari on the Honey Singh’s song Chaar Bottle Vodka.. Kaam Mera Rozka and Blue Eyes song. Kushal dances effortlessly with her while doing gymnastics with the  bar as their prop. Later, Remo comes on stage and dances with them and brings more vibrancy on stage.
– Dance form: Freestyle
– Remo speaks that Ranvir and Manish has to dance on the bar as per the request of Andy. Manish didn’t do but Ranvir does an overturn jump using that bar.
– Score: 27/30

* Shakti Mohan  dances with her partner Tushar and she performs an aerial act as well. The song is Tu Na Jaane Aas Paas Hai Khuda from the movie Anjaana Anjaani. Her dance looks poetic and depicts a story and also she stretches her body very well to meet the requirements of her aerial act.
– Dance Form: Freestyle
– Madhuri speaks that her dance has poetry and dance from her heart and soul and whenever she dance the dancer becomes the dance.
– Remo compliments on her dance as it has a real-life story as she dedicated the performance to her loving parents whom she loves the most. He also compliments Tushar for the amazing choreography since only in 3 minutes he has expressed the story in dance form.
– Score: 30/30

* Mouni Roy dances with her partner Puneet and has sensuous touch on the song Roshni Se Bhare Bhare Naina Tere from the movie Ashoka. They also have a rain dance as well.
– Dance form: Freestyle
– Karan speaks that their dance was sensual and the rain dance was an element of the surprise which take their performance to a new height.
– Score: 29/30

* Tara-Jean Popowich dances with her partner on the songs Aao Na Gale Lagao Na..Dekho Seene Mein Kaise Hulchul Machi Hain.. (from Mera Jeevan Sathi, 1972) and the dance is sensual a bit. The superhit song in the movie was picturized on legendary actors Rajesh Khanna and Helen. In this way, Tara-Jean is giving a tribute to Helen ji.
– Dance form: Jazz
– Score:30/30

Some Developments:
– Palak will shed her avatar and we will see Kiku Sharda who was behind Palak to perform as himself from next week onwards. Today, we will see Palak’s marriage and Bidai. Thus, the character of Palak on Jhalak’s stage will be gone.
– No Elimination will take place this week.
– Elena Samodanova left Jhalak because of family commitment and Karan Tacker got a new partner
Bhawna Khanduja who was earlier the choreographer of Sukhwinder Singh. Bhawna’s Twitter page.

Manish speaks about the ongoing rainy season and thinks of eating Pakodas and tea to set up the environment. The contestants and judges enjoy Pakodas and tea and even shakes a leg on different songs Aaj Rapat Jaye To Hame Na (Namak Halal movie), Koi Ladka Hain Jab Wo Gata Hain Sawan Aata Hain Chak Dum Dum.. (from Dil to Pagal Hain movie) and all are seen having a good time. Stay tuned to Jhalak on Colors @ 9 PM IST 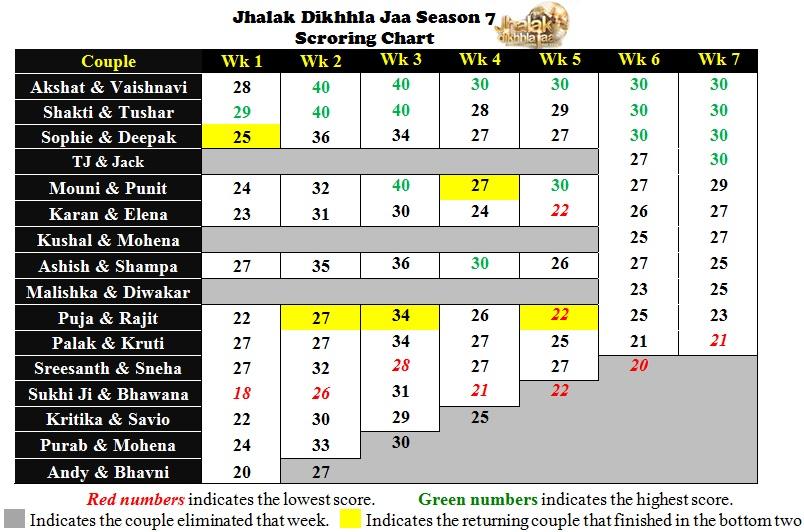