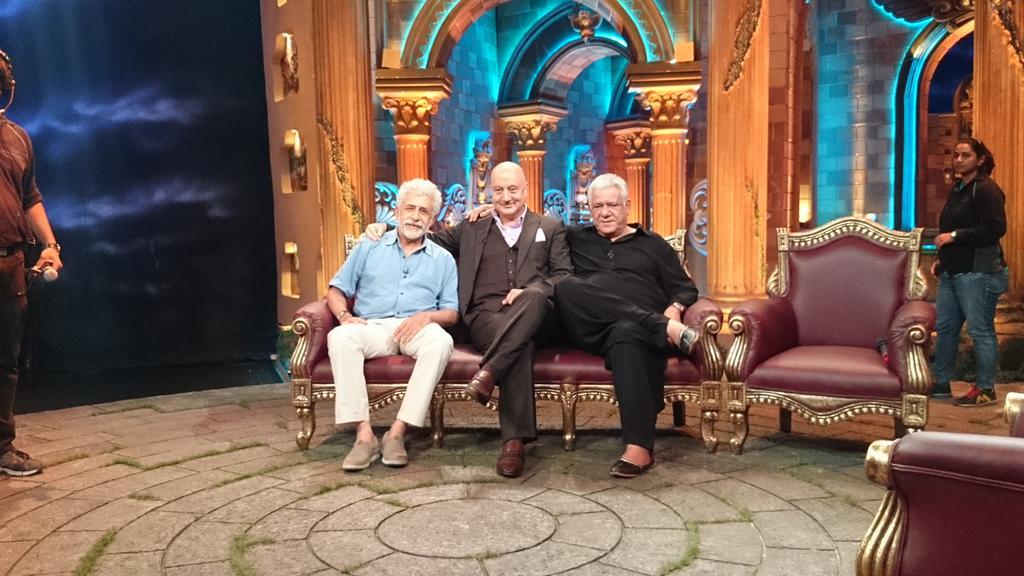 The Anupam Kher show has the format of a talk show with the veteran actor speaking candidly as well as posing tough questions. Actors, filmmakers. television and sports personalities are invited on his show. The Guest on the show are legendary actors and greats of Indian Cinema and Bollywood – Naseer Uddin Shah and Om Puri.

Anupam ji starts the show and speaks that the guest on his show who are his friends and their life has so much wonders and they show lot of perseverance, dedication, fight leading to their success and it can be itself considered as a world as well. One page from their life can be the book of your entire life. He then welcomes legendary actor – Naseer Uddin Shah and cites him as the one of the greatest actors of the world. Naseer ji comes on stage on Dil to Baccha Hai Ji song (from the movie Dil Toh Baccha Hai Ji, in english is ‘The Heart is But a Child’) and shares a warm hug with Anupam ji.

Anupam ji to Naseer ji: Since how many years have you been doing acting ?
Naseer ji: replies a minimum of 50 years and also reminds the time when he started acting as a bathroom singer. He is doing acting from the age of 14 years and he was in 9th standard in school, and was doing the play of Merchant of Venice. At that time, he thought that nobody will shake him from  not doing acting. His father was worried that he becomes doctor or engineer. Anupam ji asks how did he realized about his passion to do acting ? He replies by giving context and cites that he was a bad student and used to come last in the class and couldn’t understand physics, chemistry, trigonometry, and others but was having only interest in literature. There were so many plays in his school but he was never given opportunity since only bright students get the chance to act in those plays. Therefore, he took his own initiative and took help from four students and prepared some scenes from merchant of Venice novel and he calls Jeffrey Kindle as his teacher who used to come to his school every year. Naseer ji used to mimic Jeffrey Kindle’s acting and finds it as an escape from his living and the realities which he hated.

Anupam ji: Why was he introvert or shy ?
Naseer ji: He doesn’t know the reason and cites that his father has lot of expectations from him and he will always remember and be sad that he couldn’t make his father very happy and the relationship couldn’t repair. Anupam ji asks to whom he has shown the play of Merchant to Venice. He replies that at that time a board was placed with title ‘Merchant of Venice’ and with the info directed by ‘ Shah Naseer’ because at that time he was being called in that way as his school name was registered as Shah Naseer. That day his life changed and because of which he has lot of love for theatre and suggests that he would never be able to pay the gratitude he received from it.  He speaks on going to stage and felt awe struck and felt splendid and saw the people sitting in darkness in the auditorium and seems vague heads at first but after some moments you will start to realize the faces sitting there – your friends, family, father but it takes time to adjust to that brightness. He felt intense fear in his life for  the first 5 to 10 seconds there and his heart was beating so fast that he thought that his heart will come out from his chest. Then, he spoke the dialogue/line and the audience laughed.

Anupam ji speaks that Naseer ji remembered those moments with much detail. Naseer ji goes on to say that was the first time anybody has listen to him with some serious thought because he was the zero in the class. He realized that he is worth something at that time. When Anupam ji asks him whether his family has seen the play. He replies no and suggests that they were not informed because if they knew then he would have gotten some trashing. So, because of fear he didn’t inform them about the play. Moreover, just to play cricket he used to make excuse of extra classes and go so such things were there at his home. His father haven’t seen his work on stage but has seen his first movie Nishant (1975) and after seeing it he became very happy because he didn’t change his name for the film.

Anupam ji then welcomes legendary actor Om Puri and calls him as the colourful and the impactful actor in the world. Om Puri comes with a standing ovation and applause from audience. Anupam ji and Naseer ji tries to touch his feet and gives a warm hug to him.

Anupam ji to Om Puri: How did he join National School of Drama (NSD) in Delhi ?
Om Puri ji: speaks of his interest in joining NSD to his superior at work as he was a clerk and was a govt employee. He was discouraged and was told that in theatre there is no money and also since he belongs to a poor family so he should not think of joining it. He thought of joining NSD anyway as he has sincerely thought about it and has applied for the admission and then gave interview and got selected. After selection, he informs his boss and also about leaving the job. He got a 200 INR stipend from NSD and left the govt job. Anupam ji asks who is more romantic – Puri ji or Naseer ji ? Naseer ji replies Puri saab since he used to go at that time with flowers, fruits and sometimes sweet to girls in NSD and was very romantic. Puri ji admits to that point and replies that Naseer ji didn’t have to do such things and hard work and he has toiled hard bringing laughter. Om Puri ji speaks of Govind Nihalani and Shyam Benegal as his mentors but credits Naseer ji’s push in his life because of which he arrived to a great height and success in his life as of now. On that note, Anupam ji speaks of sitting in the same frame with Naseer  & Om Puri ji and calls them as treasure and he could see the frame for the entire life. Om Puri ji humorously asks Anupam ji whether he is thinking to loot the treasure..Anupam ji replies that if he didn’t loot or take some thing from that treasure then what’s the purpose of him being an actor. Om Puri ji admits to that argument and smiles.

Anupam ji to Om Puri ji: There are many people in his life who has helped him ?
Om Puri ji: speaks that he was given birth by his parents but only his friends have helped him in his living, and one of his close friend is Naseer ji who has helped him much. On another front, he speaks of being very shy in his childhood and couldn’t see girls though he wanted to see them bringing laughter.

Anupam ji to Naseer ji: Asking about how looks took centre stage in acting at that time ?
Naseer ji: replies that after looking at Om Puri ji and his photo from the time of their NSD days, legendary actress Shabana Azmi at that time spoke how could these ugly looking guys can think or dream of becoming actors bringing smiles to them on that anecdote.

The show brings out the challenges, perseverance, and fightback to achieve success in the life of actors and in particular this episode will showcase and bring out in open how such great actors are made by informing us with their life experiences and journey. Stay tuned to The Anupam Kher Show (TAKS) on Colors tonight @ 8 PM IST.

Additional Info:
* National School of Drama is a theatre training Institute in New Delhi, India set-up in 1959 and is public funded. Actors Naseer Uddin Shah and Om Puri were the Alumnus of NSD of the year 1973. NSD’s Wikipedia page and website for more info which would be of interest to those interested in acting (theatre, film, stage, plays).

* The Merchant of Venice is a play by William Shakespeare written between 1596 and 1598 and most of us know the play since it was included in primary English literature course in schools. Read more on the characters of the play, synopsis on the play’s Wikipedia page.