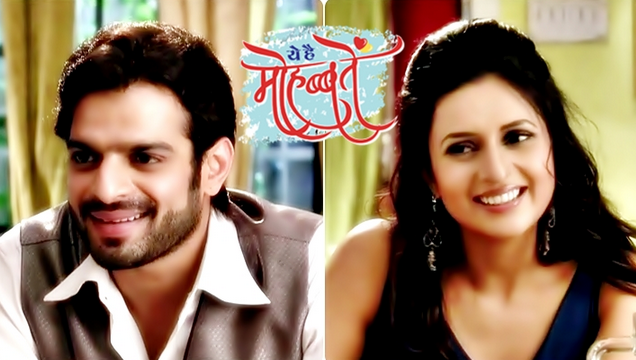 Hi Guys, here we are, with an another piece of review, which will be proved rocking if we get good stats at the end of the day. LOL!! Yeh Hai Mohabbatein was always been close to my heart, and I took updating work for it, just because I m Divyanka Tripathi fan, since I saw her as Vidya in Banoo Mai Teri Dulhan on Zee TV. I was familiar to Karan Patel, having seen him on Star Plus before in the show Kasturi, where he played the role of Robbie Sabarwal. Anyways, both the actors are now together in the show Yeh Hai Mohabbatein, and not just have a rocking, but an electric chemistry between them, which just shocks us every day, by the wonderful Nok Jhok between them. Divyanka tried her hand at comedy with Mrs. & Mr. Sharma Allahabad Wale acting very dumb and clueless about anything. Though her innocent character won hearts, but she really needed this role of Dr. Ishita Raman Bhalla to add a marker highlighted star to her career. The superbly fluent chemistry and electric train speed dialogue delivery on perfect timings between Raman and Ishita has created waves on the Indian Telly, and made them click on the late 11pm slot. Thanks to Ekta Kapoor, to redefine humor in a family setup. You won’t need to watch any comedy show, once you get addicted to Karan Patel’s fine artistic and beautiful taunts. Kudos to the dialogue writers of the show, who seem to be immensely talented and just in the right camp of Ekta, to bring out their talent and win hearts by their creative liners. Raman’s witty liners just proves that still some brains are worming and threading in the Telly industry. We have written about some shows on our site, which proved to be a big disappointment for its fans, but this is one of its kind show, which has made its standard high since its first episode and is consistent throughout. It was never shown any steep, and all the twists or the tracks called in the show were well graphed. Written a lot in general, now let’s review some sections!!

Storyline: ***** (The more you know about the show, the more you love it!!)
The story started with Ishita kneeling for Ruhi, as she wanted to fill the void space in her life, as she can’t bear any child. Raman married Ishita, just to give a good mum to Ruhi, as he knew she will be the perfect one for her. They both had a wrong impression about each other, and thought to go ahead and sacrifice their lives and happiness for Ruhi. But the fate had lots of happiness in store for them, as the sour relation between them turned sweet, full of respect, care, worry and finally love. Raman and Ishita have a relation of understanding and selfless trust, which seems to look unreal in other shows. Many couples state their trust, but can’t keep it on when the testing time comes, but Raman and Ishita have always stood by each other. The Tamilian Iyer family and the Punjabi Bhalla family has rocked the screens by their perfect roles and exhibiting two distinct cultures mended very well after the union post Raman and Ishita’s marriage. The families forgot all the differences and accepted each other by heart. The show has progressed well and has viewer’s interest engrossed. With their marriage, the couple turned into a caring husband and wife, and showed down Raman’s ex wife Shagun, and his arch rival Ashok Khanna. The latter always tried to create troubles in Raman’s life, but the hero has managed to take his troubled ship at the bay with a broad chest always.

Characterization Ratings:
Iyer Family: **** (Abhay Bhargava as Mr. Vishwanathan Iyer, Neena Kulkarni as Madhavi Vishwanathan Iyer, Pankaj Bhatia as Bala Chandran, Shruti Bapna as Vandita Balachandran, Bhavesh Jaiswal as Shravan Bala Chandan and Mihika Verma as Mihika Iyer are really talented and have created a niche by their good Tamilian accents and making Idli Dosa Sambar enter every living room. The most shining one from this is Madhavi Iyer who caught the early viewers of the show with her perfect Tamilian act.)

Raman Kumar Bhalla: ***** (Best actor Indian Telly got in recent times, we won’t penalize him for his taunts, as we are in deep admiration, Karan Patel just rocks)

Ishita Raman Bhalla: ***** (She is talented, but has finally shined with this Madrasan act. Divyanka’s real talent has come up only in this show)

Shagun Arora: ***** (This role suits Anita Hassanandani the best. Its like it got created only for her. The woman who lies and dies after money and does not value love, Shagun…. Such character is common to see in any regular show, but Anita made it a unique one by her amazing talent and perfect scores vamp definition. She is like the bottle opener for the show. )

Ashok Khanna: ***** (Usually, villains are shorter than heroes, but this one is tall. Sangram Singh essays this role, and his smile shows his heart and mind intentions clearly. Ashok’s character is that of a charmer, who loves to snatch other’s partners. He is justifying his role well and is perfectly cast opposite Anita, making them a rocking negative minded couple in the show)

Sarika, Mihir, Parmeet, Suraj Khanna and others: **** (Parmeet played by Anurag Sharma, is a grey role, can’t be called completely negative, as he is a puppet to someone else. Mihir played by Raj Singh Arora is a heroic figure, very helpful and supportive, respecting women and a truth fighter. We are glad to have a good backup for Raman in the show, as Raj Singh is definitely good to watch. Suraj’s entry recently shown looks some twists will be logged in to trouble Raman and Ishita.)

Kids can’t be judged or rated as they are like angels, who make us smile whatever they do. Ruhi, Shravan and Adi are born talented and winning hearts at such a young age.

Romance Ratio: 10/10
This show defines love, as pure and selfless one. There are not much hugs between Raman and Ishita, forget about the kisses. There are some good eyelocks, but it turns humorous as Raman can’t bear Ishita’s eye wave current for a long time. We give full ratings to their romance, as its enjoyable. One does not need to see a consummation scene between the couples to give them a perfect rating. When a couple can emit romance by their eyes and supportive line up, then physicality or sexiness is not required. The couple has always been shown clean and we would love to see some romantic moments between them in future. But with Raman and Ishita having a strong bond of trust and respect between them, we feel This is It!! There are some scenes which brings Raman and Ishita closer, and the BG plays YHM title. Its pleasing to the ears and the lead couple and their far off intimacy becomes an eye treat. Raman’s sparking smile and Ishita’s ‘’huh’’ face on his taunts are just adorable. They both are worth million bucks being watched in single frame.

Tension Quotient: 9/10
The show always had surprises. Be it Mihika’s MMS scandal, the accident case of Madhavi Iyer, where Adi was revealed the culprit, Trisha and Mihir’s track, or Simmi-Parmeet track…… The show has given us some jerks, but not so bad, as it was required to boost the show and it did well. Even the viewers enjoyed all this great twists. Till Raman and Ishita wear the war costumes and save everyone, we are glad to watch them.

Wonders:
1. Firstly, Karan Patel for leading the army and next comes Divyanka Tripathi as their medical backup.
2. Perfect dialogues written, and their perfect execution by Karan and Divyanka.
3. The storyline about modern couples and their daily events summed up looks real.
4. Supporting cast for being really supporting and shouldering the show along with the leads.
5. YHM title track (Sad and happier ones, which fits the emotional needs perfectly)
6. Genuineness in women characters. (Even the fashion icon Shagun does not wake up with long earrings and heavy make up at night, all women are given a simple homely look, just like in real lives, there is no loudness in women’ characters)

Blunders:
There is just one, which came up by forcing the mind to catch one to fill this section. LOL!!
1. Parmeet should be totally disconnected from Simmi, as a molester can’t be shown as a good husband for long. Afterall a stained heart and mind, really needs a holy water wash. His character is being prolonged and Ishita is shown convincing Raman to let Simmi be according to her wish.

USP of the show:
Brilliant dialogues and the fine script.

Overall Ratings of the show: 10/10
We don’t think the show needs any improvements on its characterization or storyline. Its just perfect and we are ready to get more memories of making us smile from this show.

This post is dedicated to team of YHM, its fans and TellyReviewers, written by Amena Hasan