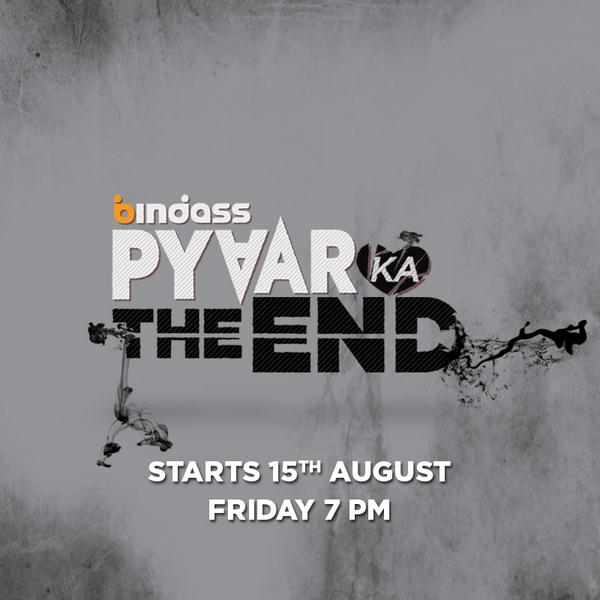 Bindass’s new brand show Pyaar Ka The End starts from 15th August, 2014. The show’s central theme is about love becoming an obsession and then comes the time where you define your limits to commit some crime and also you will have the opportunity to either cross those limits or stop yourself. It is a weekly show airing every Fridays.

The 1st Episode story is about two teenagers Avinash and Sunaina. Avinash and Sunaina are both fat and used to get taunts in their class from other fellow students. He befriends her and provides support in the class since nobody used to sit beside her in the class. Sooner, they started talking and spending a lot of time together and he began to love her a lot, shares warm hug and opens up about his fear in not wanting to lose her at any cost. Sunaina feels awe to hear about his feelings and became his girlfriend. Their love story was blossoming and then reached a point when Sunaina lost lot of weight due to some medical illness and then she became the eye candy of the college.

She comes to the college and gives him the surprise with her slim look. After seeing her, Avinash feels nervous and develops insecurity about her. Sooner, a boy Jonathan class fellow from their class flirts with Sunaina and compliments on her good looks. She goes to a party with Jonathan and gets drunk and later in that state goes on to sleep with him. Avinash’s insecurities and fear increases further and he suggests to her that she doesn’t look like him anymore. Since he used to love her a lot, thus couldn’t control her emotions and thoughts, and goes into depression and tries to cut his wrist with a blade, holds a gun against her wanting to shoot her down. The voiceover speaks that such endearing love which lead to depression might make you do things which you will regret all your life. In the case of Avinash, he couldn’t manage his emotions, disheartened nature and shoots down himself (suicide) with his father’s gun. Stay tuned to Pyaar Ka The End this Friday @ 7 PM on Bindass.

More details on the concept/idea of the show:
Most of the time you get only few opportunities to win love but on the contrary when you are in love you will face hardships and testing times on many occasions. Now, how you react after going through cheating, betrayal, heart break and what are the knobs that you carry in defining the limits and then your informed actions (right or wrong) forms the crux of the show. The show promises to provide an underlying thought process in each episode which will be delivered at the end of the episode in the form of lesson or take away. This is to signify that there is always a way/path to successfully navigate through the most tough situations in a troubled relationship where emotions play a major part. Bindass believes that the show follows its philosophy of being an ‘enabler of purposive action”. Moreover, Bindass offering Pyaar Ka The End has similarities with Star Plus’s concluded show Ishq Kills, Zing TV’s Pyaar Tune Kya Kiya and Bindass own show – Emotional Atyachaar. The show is produced by Endemol India and its first season will run for 26 Episodes. Share your comments/thought on the show on Bindass’ youtube page as shown in the promos. You are more than welcome to share your opinions on our site as well.