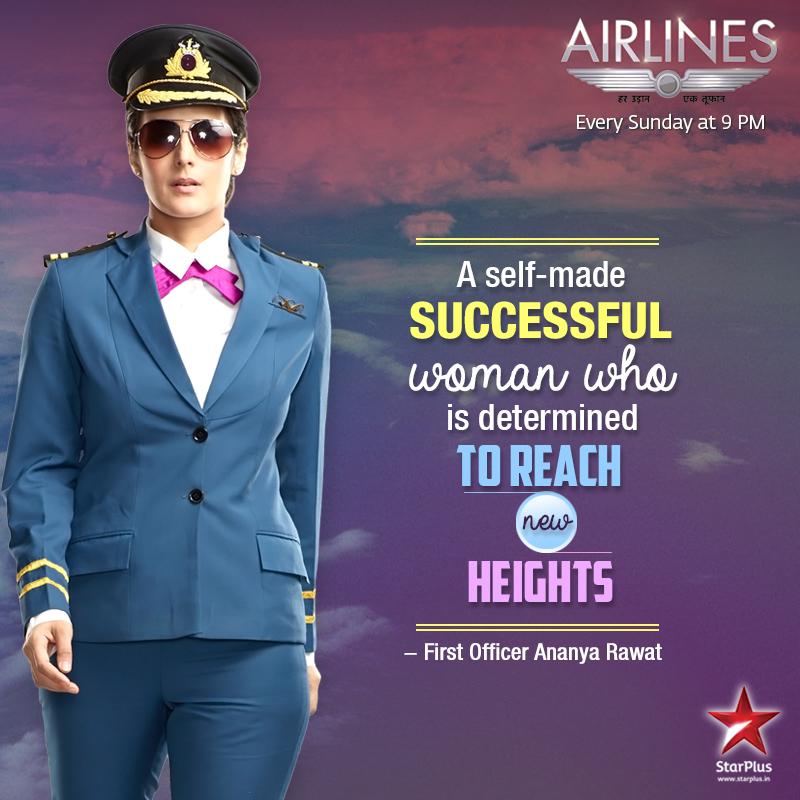 Precap: Ananya joins the airlines as a pilot and the first women recruit and greets her family and she is being told by her mother that the hardest thing in life is to keep head high and walk and one who fights it is also successful. Ananya begins her journey as a pilot and performs the take-off with Captain Verma. She drives the plane but faces a big problem at hand when captain Verma gets heart attack and after some troubles because of her courage and spirit she successfully lands the plane in Ahmedabad instead of Mumbai and gets applaud from the passengers. She is being told by Captain Akash Saluja that he will make sure that she will face disciplinary action and she will hear from the pilot association.

Ananya is being told that bad manners with a senior pilot is not accepted and committe has decided that she is fired and this turns out to be her dream. Ananya wakes up from that dream and drinks water. She gets a tea from her grandfather who asks why she is not getting sleep ? He speaks of getting phone call from Captain Verma and suggests that she did what she was supposed to do so why to be afraid. Captain called to inform that he will speak in her favor at the pilot’s association meeting regarding complaint by Captain Akash Saluja. A man wants to take a flight and comes to the airport and learns the price of the ticket to be 10K INR. He agrees to pay for it and is seen in hurry at the ticket purchase counter. He gets the ticket. Akash at his end does his morning exercise and is seen in tracks and asks a man whether there is any change in plan. The old man who was reading the paper speaks that there is no change in plan and also there should not be any plans as well.

Ananya meets Captain Verma at the hospital and he speaks that nobody is perfect and the important thing is in difficult circumstance she landed the plane without any damage and inquiry committee will definitely consider that point and asks her to not worry about it. Ananya is seen dressed in her pilot dress and then is seen sitting at the airport manager office at 9:30 am in Delhi. Akash is also there and the manager informs that the issue is between Ananya and Akash and corporate HR Mr. Nayar will contact him and asks Akash why is he so much agitated ? The manager speaks that committee is made to listen to his complaint and Akash doesn’t hear much and leaves from there. Natasha speaks to Akash that he should have given more explanation to Airport manager but he doesn’t listen to her. Ananya is complimented by another captain who suggests that she has given an example to Rookies and suggested that for decision making you don’t need to wait for captain decisions. Some other junior pilot speaks of getting scolding from senior pilots.

Ananya is seen sitting and waits for Captain Rathod and asks about the weather. Captain Rathod comes there and informs that her behavior is like a commander as told by Akash Saluja. He informs her on not showing him the mirror or vision. Captain Rathod asks Sharma about his flight details. Ananya and Rathod then goes to the plane and the same man who was earlier seen in hurry crosses the path of Mr Sharma on the way and later Sharma informs Ananya of the inquiry is being scheduled for next week and then goes to inform Akash that the committe is next Wednesday. Akash is seen at the cafeteria. Natasha comes and speaks with Akash and asks him whether he has done his preparation. He informs that Ananya is a rookie pilot and asks what she will do to him. Natasha speaks about her worry that his past will haunt him and he thanks for her concern. Akash leaves from there and Natasha the beautiful hostess of INDE Air is after him. Ananya sits with Captain Rathod in the cockpit and he speaks that he has never drove a plane with a woman so he didn’t got the habit to call a woman a captain. The passengers are coming to sit in the plane and soon the plane is getting filled with passengers. One of the man shows aggression at the hostess and he is being told to sit down. The same man follows a girl when she was going to the plane’s toilet.

Ananya checks the preliminary measures and Rathod informs her of flying 20,000 hours and taunts on her. He speaks that before he was in the airforce serving the country and also has won many medals. He calls her Madam and speaks that senior pilot is not made easily. The man waits outside the toilet and he is told by the hostess that he needs to sit down and cannot stand there. He asks her to first call the lady who is inside and all the passengers feels odd on those things and the hostess knocks the toilet door and receives no reply from inside. The passenger’s nervousness grows more and the hostess informs the pilots that a lady is not giving response to cabin crew. Ananya informs the same to Captain Rathod and he is not interested to take it seriously and doesn’t wish to damage his record because of silly cabin crew. Ananya on the phone speaks to cabin crew on behalf of captain Rathod. The parents of the lady who is not responding from the toilet wants to meet their daughter and again the hostess calms them down. The airport manager gets a call and he becomes worried on hearing it and the plane is going on the trail on the runaway.

The airport manager tells his team to trace the last call and seems to be worried and in the plane passengers are anxious on that lady inside the toilet and not responding. The plane trails on the runaway and the airport manager takes his wireless and speaks to the ATC about the flight RJ 216 about its position and the plane is about to take-off by captain Rathod. He is seen to carry strange smile and Rathod is then informed to abort the take-off and all the stations are alerted. Ananya becomes worried and informs the ATC that take-off cannot be avoided and they will land again for an emergency landing. The plane is in the air and Rathod informs the cabin crew that emergency landing is in 5 minutes and wants them to be ready for evacuation. The cabin crew is calming down the passengers and Ananya speaks to Rathod that if the passengers came to know that there is a bomb in the plane then there will be more tension. Captain Rathod doesn’t want to calm down the passengers and then Ananya requests him that she will try to calm down the passengers. She introduces herself as Ananya Rawat and informs the passengers that because of technical difficulty there are doing an emergency landing and after landing once they will do another take-off and wants the cabin crew to follow the instructions. Captain Rathod compliments Ananya and she wishes him the best and he replies good luck to both of them. Rathod lands the plane on the runaway and the evacuation buses and cars comes there to assist in evacuation. At the airport, the same man who was earlier asking for 10K ticket hurry and wearing yellow dress is identifed as a suspect and is being followed. The same man runs after seeing the security staff following him and Ananya and Captain Rathod are seen walking back after the landing.

The man in yellow T-shirt is running from the police and the airport manager informs Ananya that everything is monitored and informs her of getting a phone which was traced from the airport. The man is still running in the airport and the lady who was seen earlier in the plane’s toilet cries in the restroom. Ananya comes there to the restroom and finds the girl who was on her flight and she informs the boy of 23 years old is caught by the police, She wants Ananya to take her to that boy.  She goes to the boy who has been caught by the police and she calls him Sahil and request the police to leave him. The girl’s name is Payal and her parents come there and wants her to leave Sahil. Payal is not emotionally well and Ananya is amused to see those developments. Sahil is being told that he will be taken to jail and Payal parents inform that Saahil is after their daughter since many days and wants the inspector to take strict action. He informs the police of not making the phone call and just came to stop her. Payal informs that Saahil is right and that phone call is actually made by her and it shows that she called the Airport manager informing him about the bomb in the flight., She informs the same to police and Ananya hears it and Payal wants to marry Sahil and she did that call because she doesn’t have other option. Ananya asks how much selfish she is and doesn’t worry about the safety of the passengers in the plane. Akash comes there and wants the concerned Authorities to handle those issues and asks Ananya why she involves in all these things personally. She speaks that the difference is what are the options and if failure was an option then it would be easy and speaks that she needs to win and doesn’t have option for her and wants to challenge Akash by saying – Bring it on referring to next Wednesday committee meeting.

Next Week:  The committe informs Ananya about the disciplinary action and Akash is seen handling small pistols and later he informs Ananya that her flight from Trivandrum will be the last one of her career.