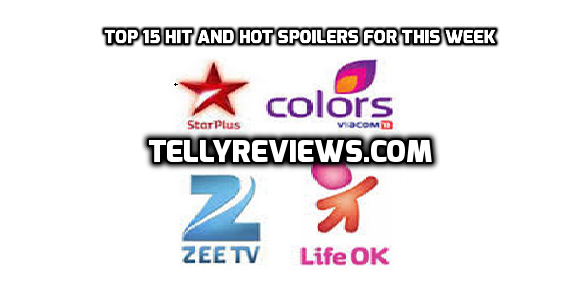 CHECK WHETHER YOUR FAV SHOW FALLS IN THIS POST

Pragya hides her pain and tears from Sarla when she meets her in the hospital. Though their mum and daughter relation is strong and does not need words to emote and explain. Pragya assures Sarla that she will manage everything. The full on family drama starts. Abhi comes to drop Pragya at home and they have an argument. Sarla hears them and is shocked. Bulbul is blamed by Sarla and Bulbul decides to leave the home for Pragya’s sake. Pragya makes Bulbul understand that she will make everything fine and Bulbul need not go anywhere.

Ranvir has become a rich guy and avoids the marriage talk at home when his mum shows him few marriage proposals. Ranvir turned into RV and kept a party at the new home. He invites Ishani and Chirag. RV is angry on Ishani for not understanding him after knowing him for years. Ishani does not want to think about Ranvir and manages the drunk Chirag. Ishani is unable to trust Ranvir as he broke her trust. Ishani sees Ranvir and tells her mum that she will take her home back from RV very soon. Ishani breaks down as her past faces her.

Raman feels embarrassment infront of Ishita as Shagun starts her romance stories linking Raman in his past once again. Raman stays polite as Adi is present too, which miffs the family, while Parmeet enjoys every bit of Raman’s tension. Shagun claims Raman to be sheer romantic and annoys Iyers and Bhallas by her talk. Ishita gets upset with Raman, but shows her trust on him. A touchy Raman comforts her and some cute romantic scenes (including a dance sequence in rain) between Ishita and Raman are shown. Mihir’s sister truth to break out soon. Ishita and Raman’s bonding will be more stronger by facing all winds. Poornima plans to help Shagun in hiding her identity.

Anmol is still hidden for spoiling Rishabh’s name and trying to kill Ranvi. Ranvi sticks to his talent notes and sings well in the third round. Ranvi has won the Junoon 2014 competition semi finals and made the Pind proud. Gunjan hides Veera’s accident fact from him as Veera stops her. Veera gets fine by Baldev and family’s prayers and then they inform Ranvi. Ranvi and Gunjan come back to Pritampura to meet Veera knowing about her accident. The Pind celebrates Ranvi’s comeback. Gunjan looks good in western clothes. Ranvi, the rockstar is welcomed well by garlands and dances. Everyone is stunned by Gunjan and likes her new look. Ranvi and Gunjan will be going back to Mumbai to resume the competition, and Ranvi will not like the changes coming on Gunjan by the stardom life.

Aahil and Sanam are dreaming of their perfect happy home and have some romantic interactions. Tanveer plans to outdo Sanam, but fails. Seher/Sunehri is the big drama queen, as she is fooling Rehaan. She has trapped Rehaan by bringing fake parents. Rehaan is puzzled seeing them, as the parents are like comic characters. They are working for money and agree to help Sunehri. Rehaan’s safe is under risk. Sunehri is confused about the new actors, as they do over acting and make her land in Rehaan’s doubt.

Zain and Aaliya’s relation going though tough phase. Rehaan sees Zain loving Aaliya more than before and backs out seeing his strong feelings. Rehaan asks Aaliya to give a chance to Zain and reconcile with him. Aaliya refuses saying Zain has given her much pain which she can’t forget easily. Aaliya gives three challenges to Zain for the three divorces to her. She asks him to pass in the tests, only then she will forgive him. Zain accepts her challenge. Zain gets hurt in the process, and Aaliya’s heart goes out to him. Rehaan decides to unite the lovers.

Mahamanga’s death sequence ahead in the show. Javeda is pregnant with Adham’s child and Mahamanga has given her blessings to her. Mahamanga was eager to hear Badi amma from Jalal. Jala calls her Badi Ammi and Mahamanga smiles happily. They have an emotional scene where Mahamanga takes her last breath in Jalal’s arms. Jodha will be taking care of Jalal’s tears post Mahamanga’s death. Ruks will try to become Marium –uz- Zamani by taking the best wife place and replacing Jodha in Jalal’s life. Ruks will be plotting some evil game against Jodha to kick her out of Jalal’s life.

Sakshi plans to make Durga the bahu of the Goenka house to get a hold on her, but not by marrying Shaurya. She wants to make an issue on the marriage day and make Dev marry Durga. Dev will be finding out Durga’s truth before the marriage and it has to be seen whether Dev and Durga get married. Dev gets the video tape against Shaurya which shows his crime, as recorded by Payal’s phone. He decides to get justice for Payal.

Niranjan’s evil face is seen by Jyoti and he has lost one more supporter. Jyoti decides to get justice for Anjali and Astha, and make them get respect in the house. Jyoti bridges between Shlok and Astha. Anjali asks Jyoti not to tell Shlok the truth. Jyoti controls herself, but gets angry seeing Shlok scolding Astha for the mistakes Niranjan did. Jyoti joins Anjali and Astha on the mission to expose Niranjan and make him realize his mistake, without hurting Shlok’s sentiments. Kalindi will be facing a shock of her life, as her past will stand before her again. Prabhakar’s son Ankush’s entry happens in the show who is linked to Kalindi.

The marriage celebrations are still going on. Sid and Roshni’s dance acts spices the show and irks Durga Devi as she plans to do something against Sid. What will DD do? Sid is confident that no one can separate him and Roshni now.

Sandhya has shifted RK to the fake village setup where she has home locked RK. Disha comes to know Sandhya has shifted RK and goes to follow Sandhya. Disha reaches the village where Sandhya and Zakir have hidden RK. Disha looks for RK there. She acts like a tourist and sees through the place by the camera lens. This time RK can’t cheat Sandhya and Zakir, as he is kept with a family and they scare him by the guns. Sandhya tells RK that this people won’t think twice before shooting him if he tries to run away. Sandhya changes her attire every time so that RK’s network can’t reach him. Sandhya even dons the Burqa to fool Disha.

Naitik and Akshara does the Garba in Surat. Their romance starts as Akshara meets him in his dream Naitik stays with Shah’s family and Naitik misses out Akshara. He imagines her and they have the romantic dance . They take part in the Dandiya competition, but are not keen to win it. Naitik’s dream ends soon and gets upset feeling lonely being away from family. The Singhania family does Gayatri’s Shraddh. Devyaani calls the pandit and supervises it thus winning Rajpanna’s heart and making everyone happy. Yash advices Naksh to meet Naitik by going Surat and he will give him Mohit’s train ticket. Naksh agrees and is happy. Will Naksh fall in any problem?

Adi is confused between Ayesha and Pankhudi. They both are symbol of selfless love. Ayesha leaves Diwaan Mansion. Just then Nilofer comes from Lucknow and creates a scene in Diwaan house asking for Ayesha’s rights being Adi’s wife. Adi is clueless where Ayesha went and still goes to find her. Ayesha comes back home and calms Nilofer by supporting Adi and Pankhudi’s love. Everyone is amazed seeing Ayesha’s goodness. Adi knows its difficult for Ayesha and promises her he will always be her friend. Pankhudi comes to senses and loses her memory which makes Adi disheartened. Ayesha helps him out in making Pankhudi fine. Whom will Adi choose finally?

Chakor has been giving the wrong impression to her parents that she is happy at the haveli. Bhuvan blesses her while Kasturi ends all ties with Chakor, to make her heart hard and forget them easily. Ishwar meets Bhuvan and is shocked to see same stamp on his hand. He questions him about the stamp, while Bhaiya ji and Tejaswini get tensed. Ishwar rejects Bhaiya ji’s factory proposal and pledged to end bonded labor. Will Ishwar be able to free Chakor from Bhaiya ji’s labor contract? Yes, and Ishwar will be taking Chakor with him seeing she has the capability to go ahead being smart and sharp. Chakor is determined to erase the stamp sign one day.