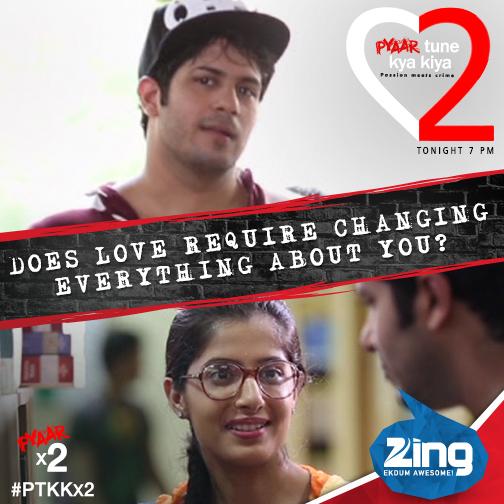 The story is about Aditya and his journey to find love. Aditya was having a girlfriend Taniya but she decides to break their relationship she wants to focus on her career in films. When Aditya learns about it, he informs Taniya (who won Face of the Year) directly on her face that he will move on from their relationship but will participate in the dance competition which he had planned earlier.

Aditya makes a vow to bring a much better girl in his life than her. On that note, Aditya and Taniya are separated. After his breakup, Aditya’s friends wants him to woo a girl the one which they decide for him and this set-up is their bet. Aditya speaks of realizing that bet and his friends choose Pooja as the girl. His friends also inform Taniya about the bet and how Aditya is going to woo Pooja.  Sooner, Aditya befriends Pooja who is a very simple and wears specs as well. He pampers her by suggesting she is beautiful. She answers him openly by reminiscing on how she is wearing the specs since childhood. After seeing him coming close, Pooja thinks that he has fallen in love with her and informs her friend. Pooja’s friend compliments her that a star (competitive dancer) like Aditya has fallen for her. She takes that compliment and feels awe.

Aditya and Pooja are taking their friendship to next level. When they met, Aditya wants her to participate with him in the dance competition. She hesitantly speaks of not knowing the dance. He convinces her by giving his word to teach her how to dance. He begins to teach her dance and are seen giving her dance steps and moves. Pooja has interests in painting and drawing and on one occasion she presents him a sketch of himself drawn on paper. He accepts it and feels very happy and showers a hug to her.

Aditya’s ex-girlfriend Taniya comes to know about Pooja and also that she is going to participate with Aditya in the dance competition. Taniya confronts Pooja at the cafeteria and asks whether she has left painting and has started dancing. She puts down the juice drink to show her anger and makes a taunt with a sorry message and leaves. After that incident, Pooja is taken aback and informs Aditya that she doesn’t like to participate in the dance competition in a teary voice. He tries to asks her about the reason and tries to calm her down. Taniya decides to give a final blow to Pooja’s participation in the dance competition by suggesting that Aditya does not love her and reveals that all these things is a bet which has been made by him.

It is seen that Aditya is very fond of Pooja’s simplicity, vivacious and openness and seems to have fallen in love with her and it seems that she also reciprocates the same feelings for him. But after Taniya’s revelation about Aditya’s bet, what she would be thinking about him ? Some of the questions are, Whether Pooja will clarify with Aditya about the bet and makes sure that it doesn’t effect their relationship and love ? How would Aditya inform her about the bet and reiterate his current feelings and love for her ? Will Pooja understand his initial mistake and forgive him so as to steer their love away from guilt potholes ? Will Aditya and Pooja finally become lovestruck ? Stay tuned to Pyaar Tune Kya Kiya this Friday @ 7 PM on Zing TV.

Info on Cast:
* Aditya is portrayed by actor Karan Chhabra
– Won the first season of UTV Bindass Superstud
– Worked in Channel V’s V The Serial.
– Portrayed the role of Rahul in Bindass’s Emotional Atyachaar episode (2014).
– Recently worked in the role of Karan in Bollywood movie Heropanti (2014).

* Taniya is portrayed by actress Isha Chawla
– Isha is an upcoming actress.